Imaqa like many of the aluminum boats cruising the colder regions is a custom design, but is apparently a design that a couple were interested in at the same time, so they built three of them at once in what I believe is an old barn (this is what I understand from Google’s translation of one of her sister ships websites). I haven’t seen the inside, but from what I understand she has a small swinging centerboard which fits into a half cabin height trunk which is nice in the fact that it doesn’t divide the space quite like the full size swinging keels that Pelagic Australis and Seal have. Instead of having a swinging rudder though she has three low profile rudders, underneath a rather wide stern.

Anyways, she’s a relatively unique boat, so here are a few pictures. 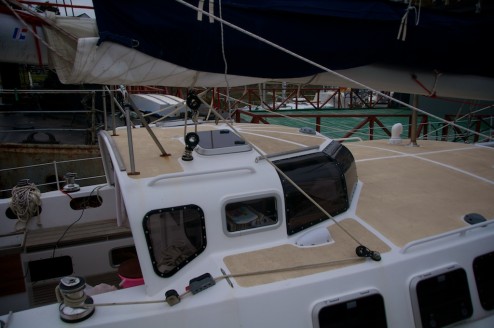 And interestingly designed little pilot house with Lexan windows that they curved themselves, and just enough space for a nav/kid distraction station inside. 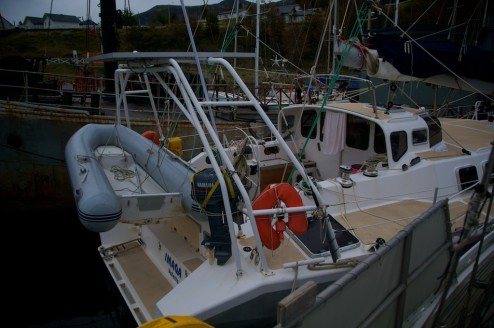 A very wide stern, but those hatches on side access a storage space underneath. She’s about the length of Seal, so it would be interesting to see just how different the two boats ride.

Eventually we got underway and headed back towards Caleta Olla, or the opposite direction of where we previously traveled when we were trying to escape a lack of information about an impending tidal wave.

Our first stop was Caleta Olla so that we could test all the systems, to be close enough to Puerto Williams that we could run back and get online if we needed too. There we found a couple of nice sunsets, with the rocks overhead lighting up golden, but only for just enough time for you to start getting your camera out if it wasn’t out already. 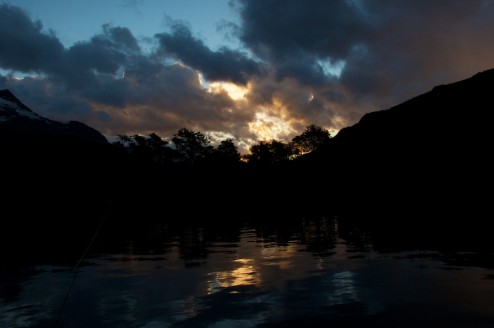 In Caleta Olla I focused on getting the GPS systems up and running, which meant spending quite a bit of time sitting behind several different computers configuring, downloading data, and trying to generally get the software to understand what the GPSs were telling it. 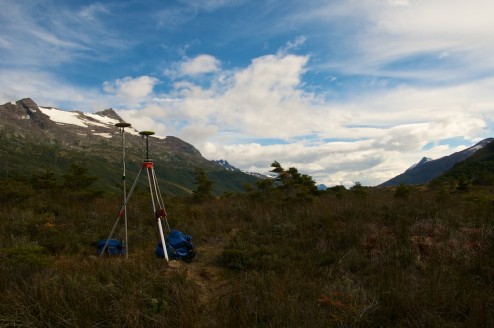 At times it also looked like I was hosting some kind of replica UFO convention in the peat bog. 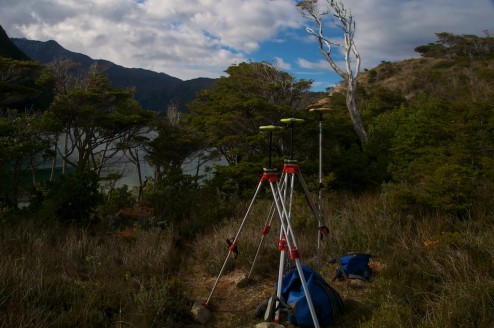 And then they multiplied.

And I wandered up to the top of the hill to get many very precise measurements of a single stick’s location in my series of experiments. 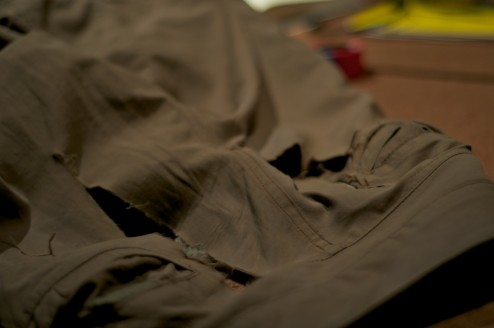 Finally I managed to re-ventilate my pants, blowing out a couple of the patches that they had before this trip, but a bit of dental floss and some bad stitching later and they are back in working order.

After I managed to get a relatively workable system going with the Javad GPS units, Charlie managed to get some data from his weather station, and Eric got to set up a rain gauge and temperature logger up at 600 meters and discover a possibly interesting glacier we headed back down to the Southern Arm of the Beagle Channel on the 28th. There we turned back into Estero Fouque of Isla Hoste where we hoped to put some of these systems to the test on a glacier that Charlie has spent some time studying before. 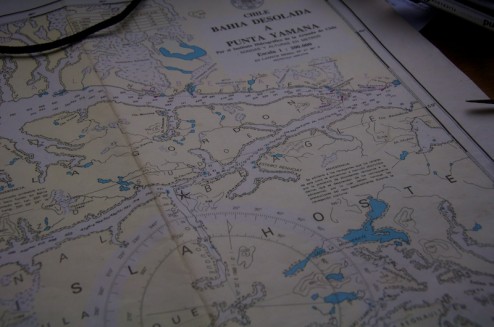 Caleta Olla is located right at the Eastern most point of Isla Gordon which separates the North and South arms of the Beagle Channel while Estero Fouque is located right next to the star diving deep into the interior of Isla Hoste. 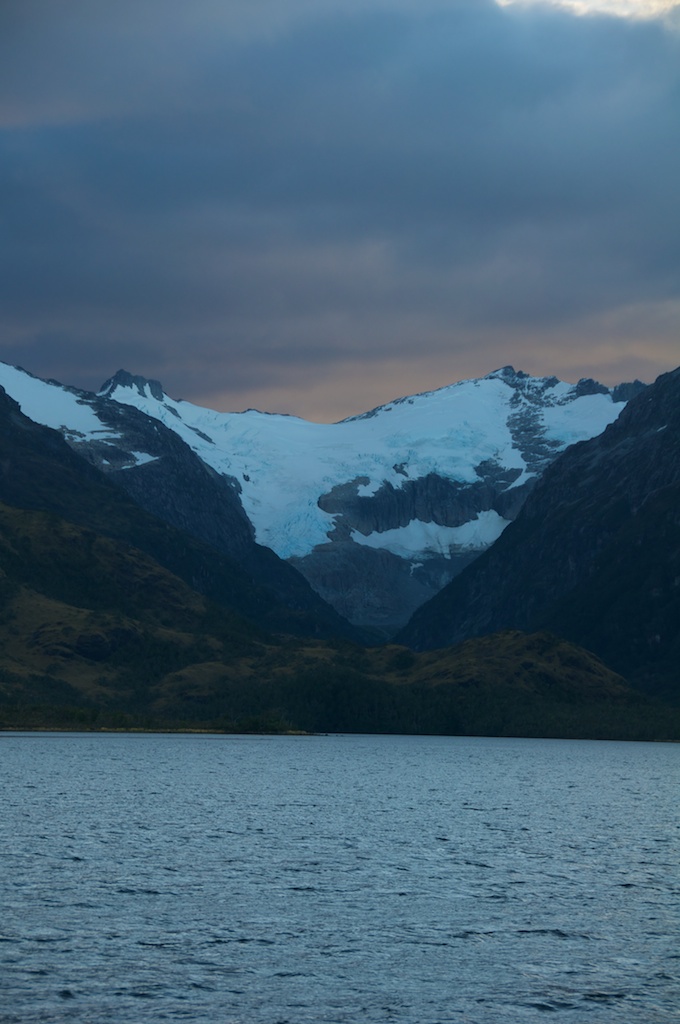 Some ice that we saw along the way once the sun tucked itself behind a cloud. 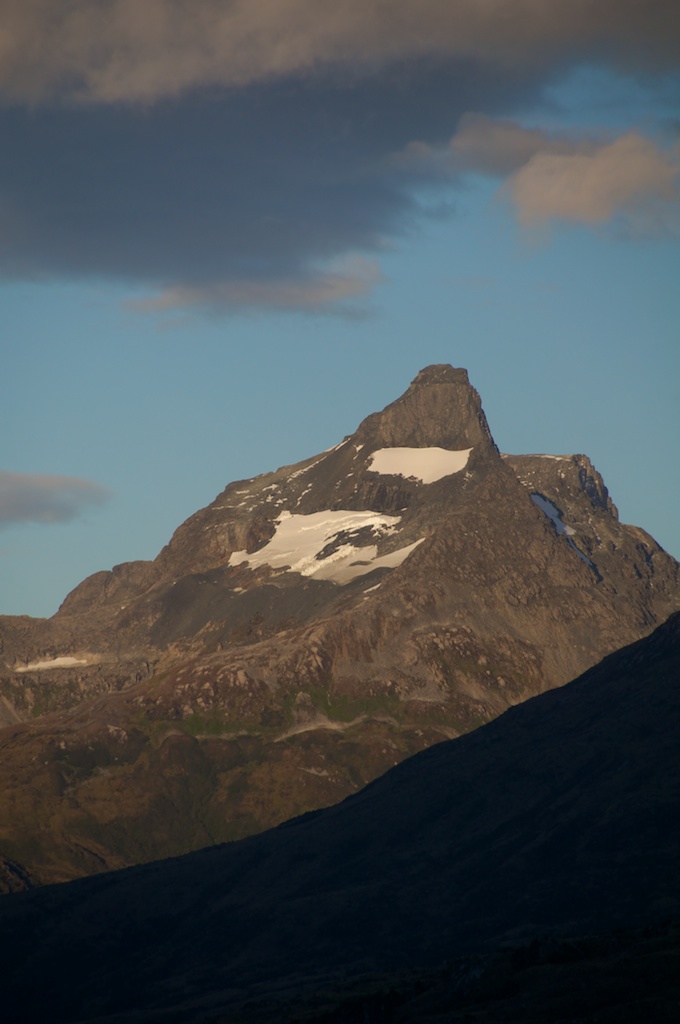 On the 29th Charlie and I zipped around to the other side of the Fouque glacier from our anchorage and hiked up a very interesting trail. From the shore, and even from a couple yards from the cliff face the route isn’t very clear, but once you are halfway across the fjord it starts to be visible. From the hike it became clear that the first couple of trips must have been quite an adventure, but other boats have learned of Charlie’s trail and it has since been cleared out a bit.

Charlie had previously run a GPS profile up Fouque glacier with his ProMark3 GPS units, and had also left a tie-down point for attaching a base-station too, so we used that point to start our survey from. 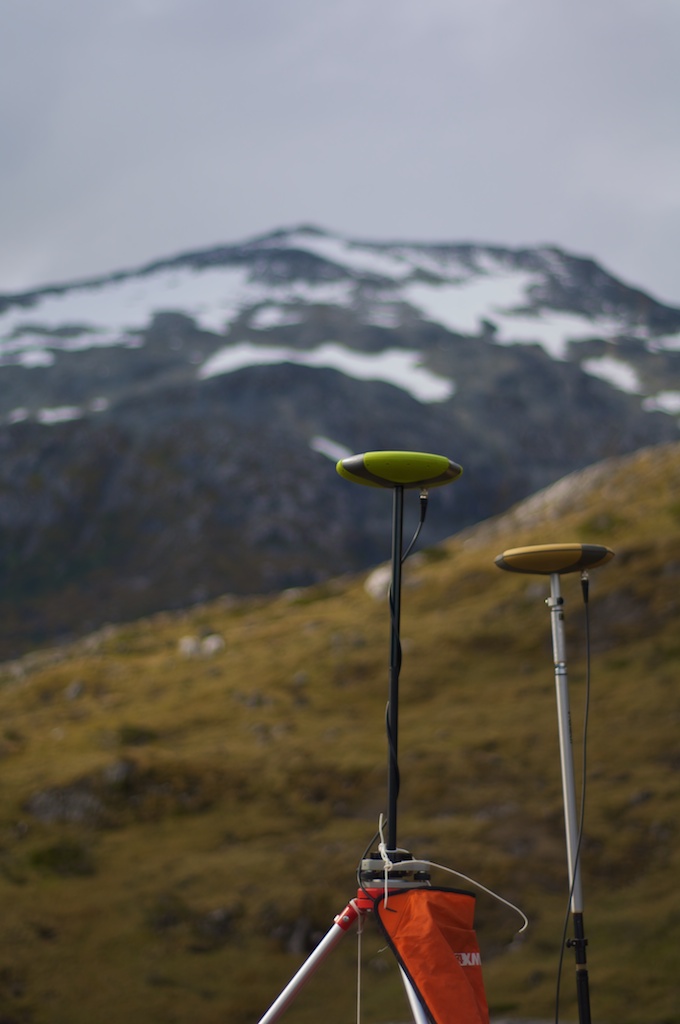 Somewhat similar view to Caleta Olla when looking in one direction. 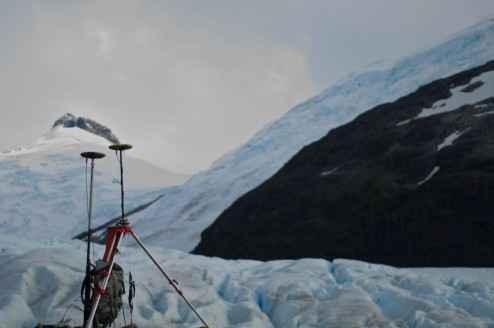 But very different while looking the other way.

Charlie had initially planned on giving Eric, Christine and I an introduction to glacier travel at Fouque, but with how busted up the ice was he decided to trek up himself. I stayed around the base station for a while to make sure that it didn’t have any problems before I started to hike up the ridge for a lookout spot over the ice to hopefully get a few land based shots to feed our structure from motion (Photosynth/bundler) experiments. Few, of course, meant around 200 in this case, but I won’t share anywhere near that many. 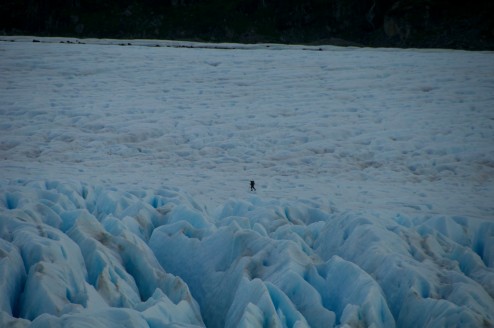 Charlie trying to follow the profile that he had created before through the cravase field. 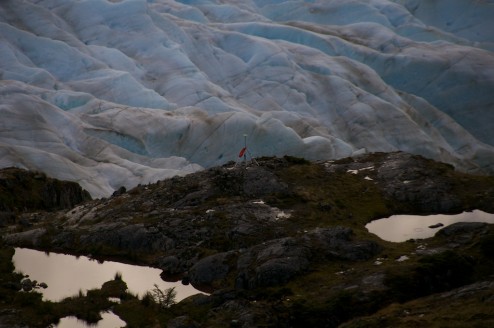 Getting up the ridge, this shot was taken at the furthest zoom of my camera, and I wasn’t near the top yet.

It’s quite a view up the ice. Click on the photo to expand, and this is only a quarter of the size of the real panorama!

Eventually we started to head down, initially thinking that it was close to sunset, but then realizing that we might have looked at a watch that was set to GMT rather than local time. Nicely though this gave us time to explore some of the features along the lateral margin of the ice, while looking for paint marks that shows the retreat of the ice. 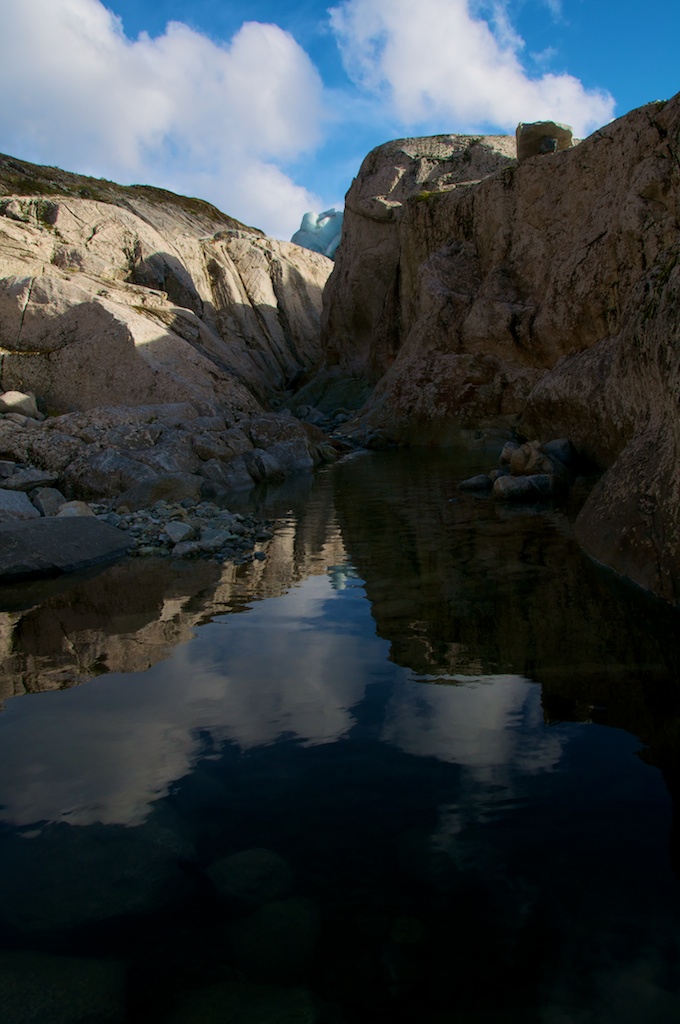 A very cool little canyon, that apparently used to be full of water rushing out from under the glacier. If the access was easier it would probably be fun for a quick whitewater run at high water still. 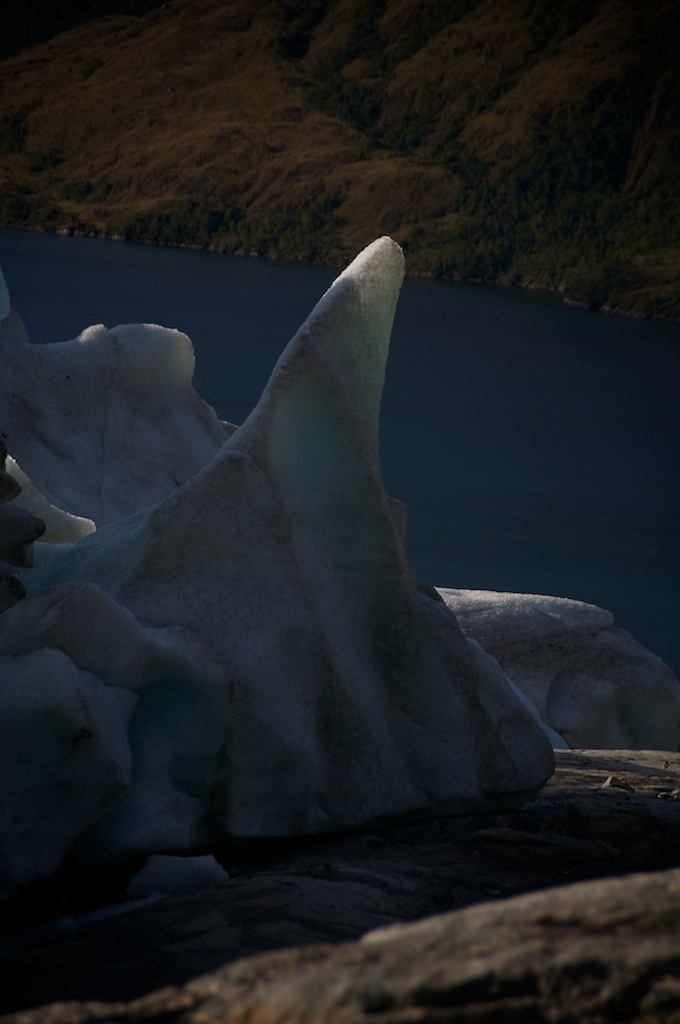 The ice along the margins makes for some very nice shapes... 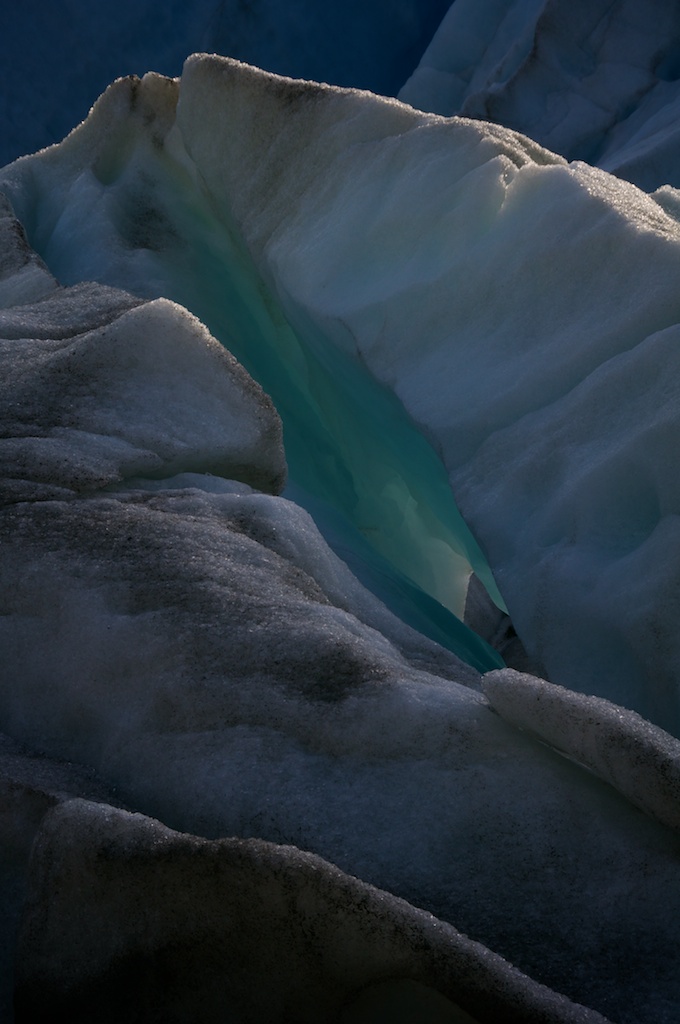 The 30th brought wind, rain, and snow to the fjords which made it hard for us to complete our GPS profile, so we moved to working on an inside project, getting the dendrochronology system setup. 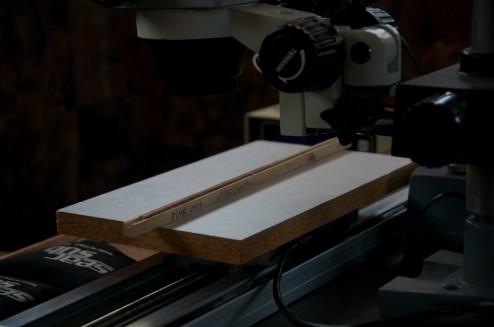 Outside for the next couple of days the snow made the cliffs above us even more majestic looking while also making water appear where there was none before. 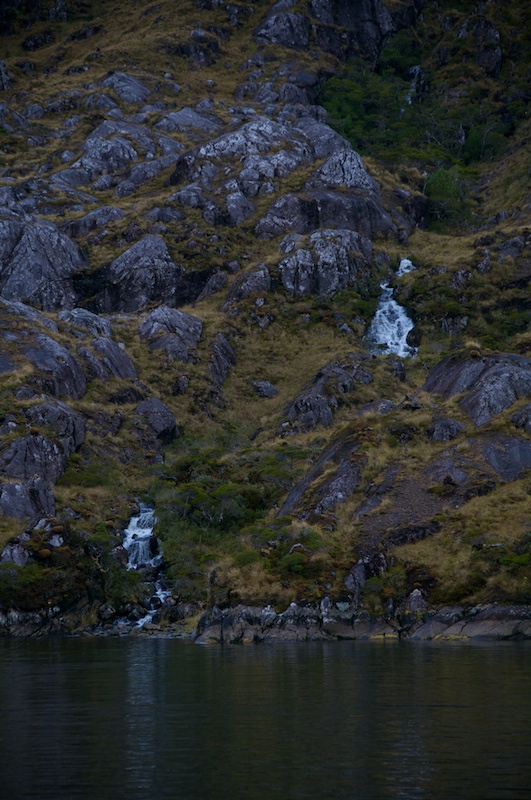 A nice little creek that sprang into view pouring into the cove where we were anchored.

Wind and rain we can largely work through, but snow on heavily crevassed ice is pretty dangerous to hike on, so we were shut down for several days.

Overwriting the .htaccess directory in Wordpress's directory will drive you and those subscribing crazy when you can't figure out why you can't post anything new.

Sorry to anyone who's subscribed and just got a handful of different stuff dumped in their mailbox as I was trying to figure out the problem.