Back up to GPS

Charlie and I hiked back alongside Fouque glacier to our GPS basestation, and I started the system back up, so that Charlie could try to hike a more complete profile. The rain and snow held off just long enough for us to get setup, Charlie to climb onto the ice, and for me to bundle up against the cold. 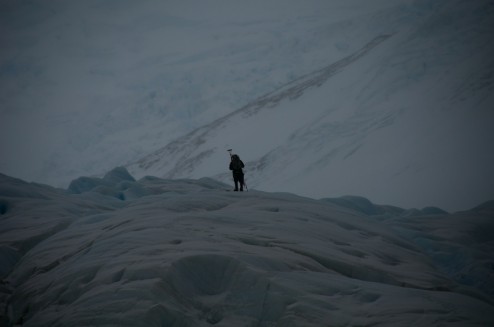 Charlie investigating the ablation stake that he put up the previous day.

Pretty soon though the rain came back, and at times it decided that  it was snow, but mainly rain right around freezing. It also brought some high winds which came from almost every direction, making it especially fun to check the power usage of the GPS unit!

On the third we left Estero Fouque for Seno Garibaldi to get a look at a glacier that is advancing, but Isla Gordon lay between us and the entrance to Garibaldi. Canal Barros Merino does cut through and shorten the trip around, but it was currently closed by the Armada, so we spent a brief night at Caleta Olla before heading around and up the North East arm of the Beagle Channel. 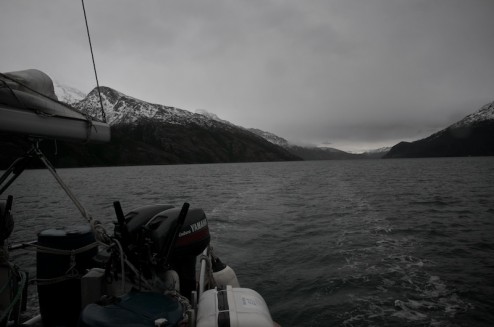 Motoring along under overcast skies. 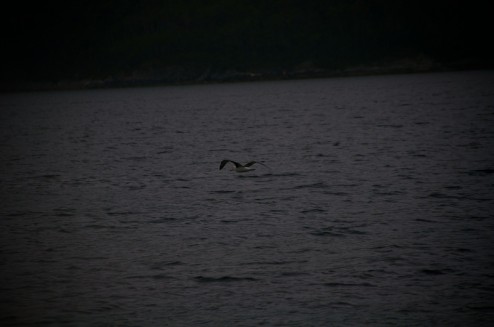 Albatross are really interesting to watch.  They fly really low over the water when they first take off until they can find a thermal where they just start gliding. 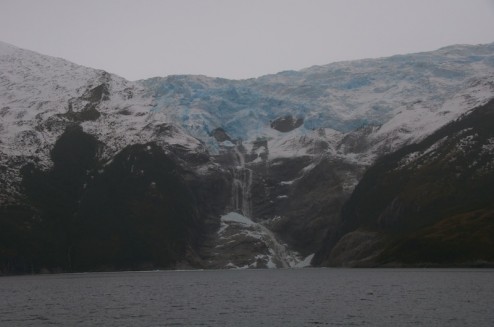 Along the way we got another look at Romanche glacier spilling over the cliff. 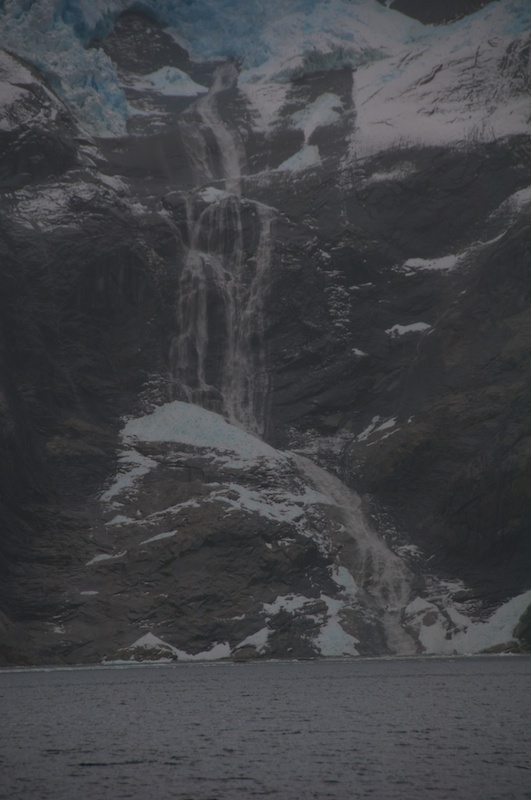 It looks a little bit colder looking, kinda like a bit more painful version of the Monarch Mountain Boatercross if anyone was nuts enough to try it.

Soon we found ourselves several miles up the fjord. After dodging a few chunks of ice and being distracted by a fur seal colony tucked into the cliffs we tucked in behind an island to anchor largely out of the path of ice. While Charlie and Eric motored up to the calving face to check out a few locations for putting up cameras, and possible routes onto the ice, Christine and I hiked up the island. 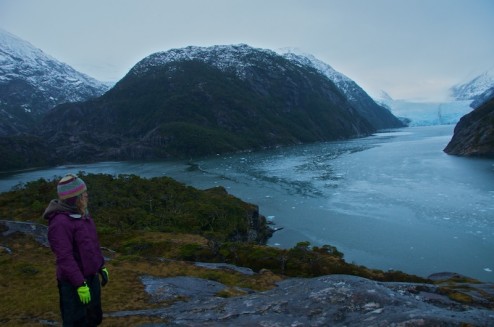 The glacier proved to be just on the other side.

It was quite a view from on top of the island. 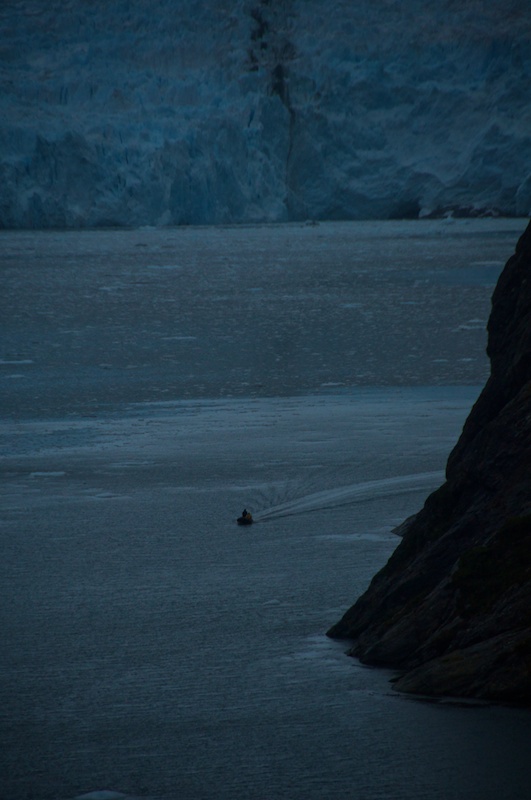 Charlie and Eric coming back from their scouting mission.

The island is incredibly sculpted due to being completely overrun by the ice at some point. It’s covered with holes left by rocks forced and spun around underneath the glacier. The terrain is also incredibly fluted and polished making for some tricky hiking.

On the fifth the rain held off all morning, and what might just be considered the sun peaked out for a while so we got some better views of the scenery surrounding us before it became soupy again.

Looking down the fjord towards the Beagle Channel from the stern.

The view from the port side. 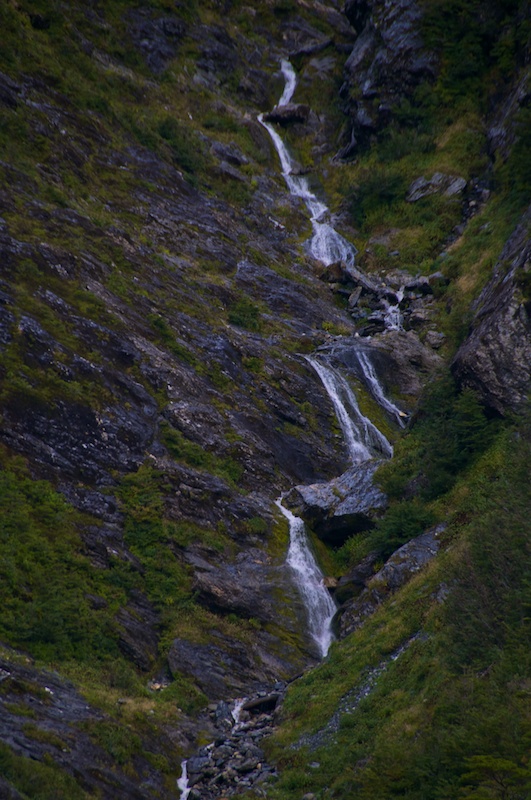 A nice little series of waterfalls cascading down towards our anchorage. Unfortunately it doesn’t look like they will float a kayak that well. 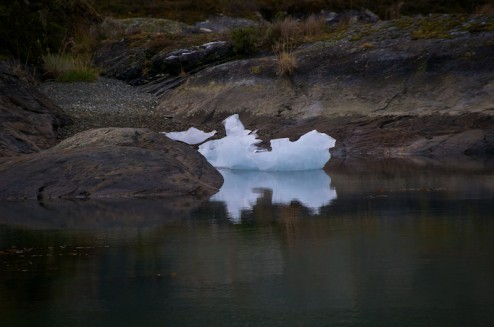 Another denizen of our anchorage. 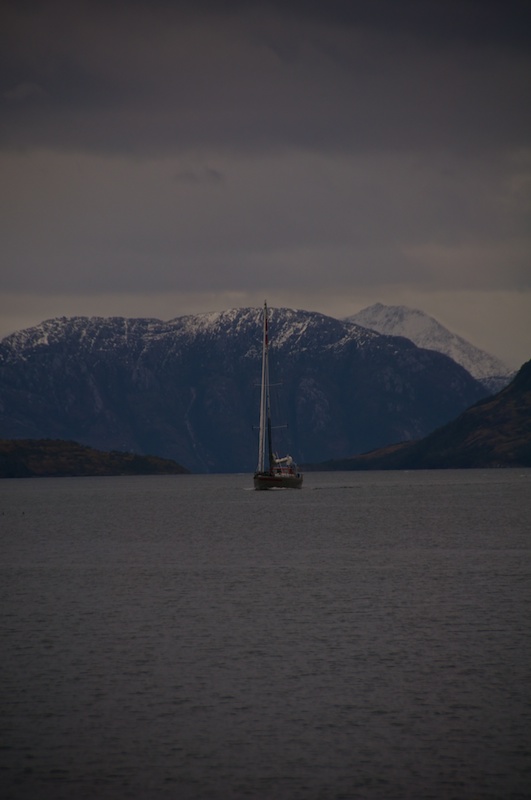 Pelagic Australis also came by to give her current guests a view of the glacier, but they didn’t stay for too long, other than visiting the seals.

On the sixth, the rain came back, but Charlie and Eric went off to collect water temperature data. Christine and I decided to try to hike up to the waterfalls next to our anchorage but slippery conditions sent us searching for seals. We found a couple swimming around, and we could hear the colonies further down the fjord living it up. 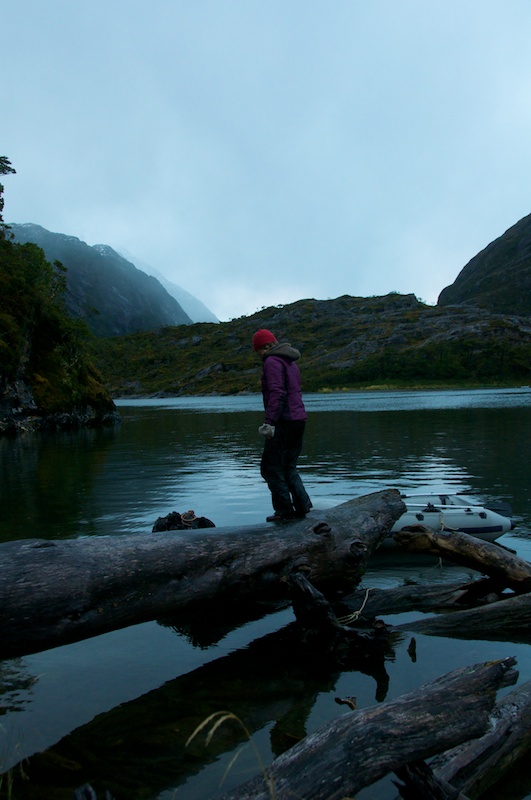 The dingy dock of the day.

Overnight it decided to snow all the way down to sea level for a change. I took a couple of pics before we cleaned the decks off. 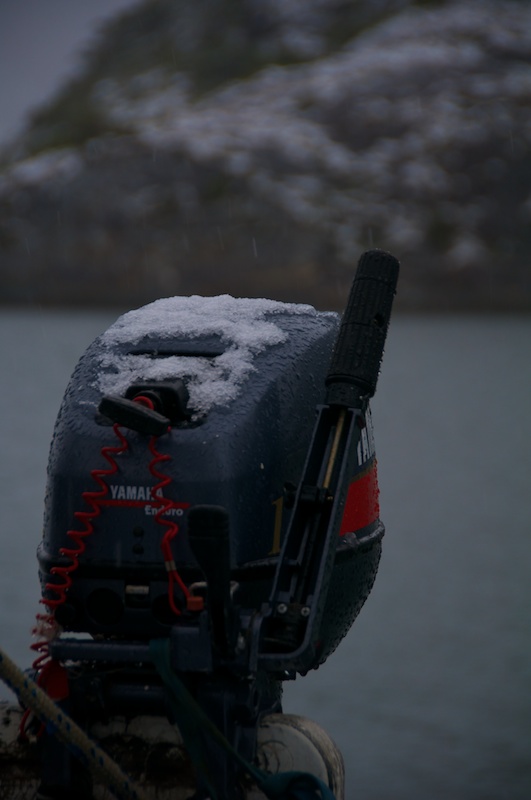 One of four motors that we have for the zodiacs. We rarely go anywhere without two motors in the zodiac in case one breaks down. 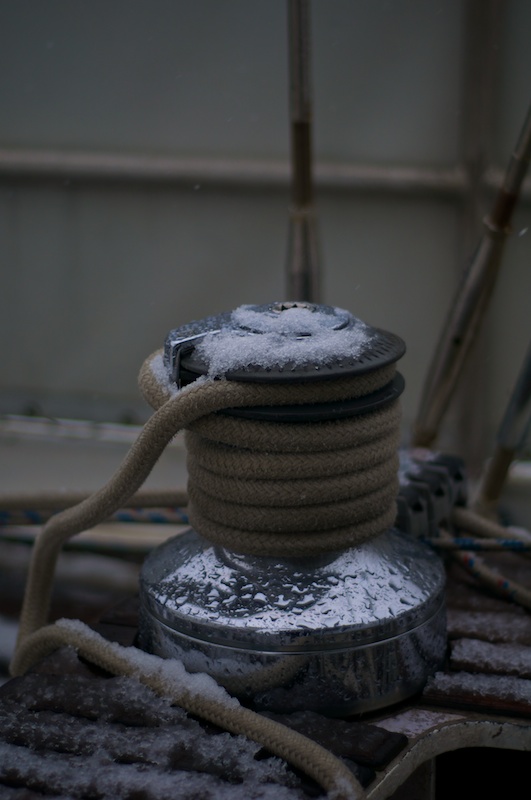 Why we clean the decks off. Otherwise some of the snow melts and then the slush refreezes making the decks very slick.

Low clouds look better when there is also snow. 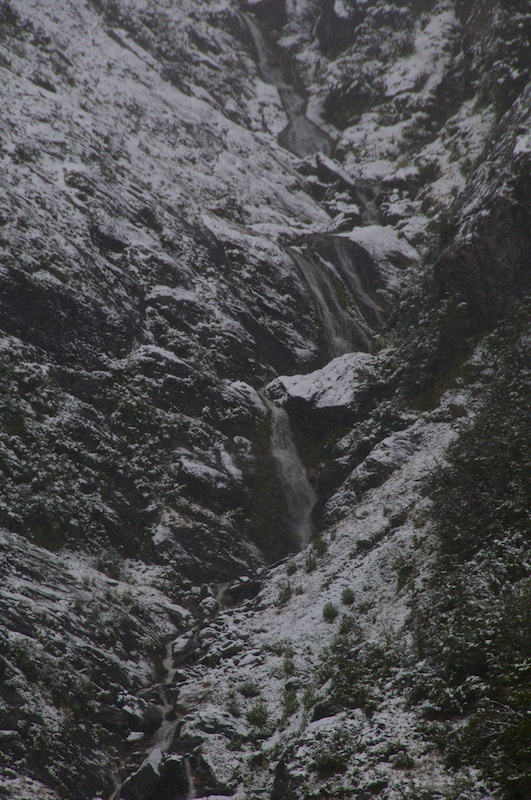 A slightly different look to the waterfalls that Christine and I tried to explore. We made it up to that lower big drop, but the traverse to get past it was a little sketchy in sailing boots.

We towed the zodiac down fjord this time because we made it a mission to visit the fur seal colony along the way, though I stayed on the boat because we just left her drifting in the middle of the sound. 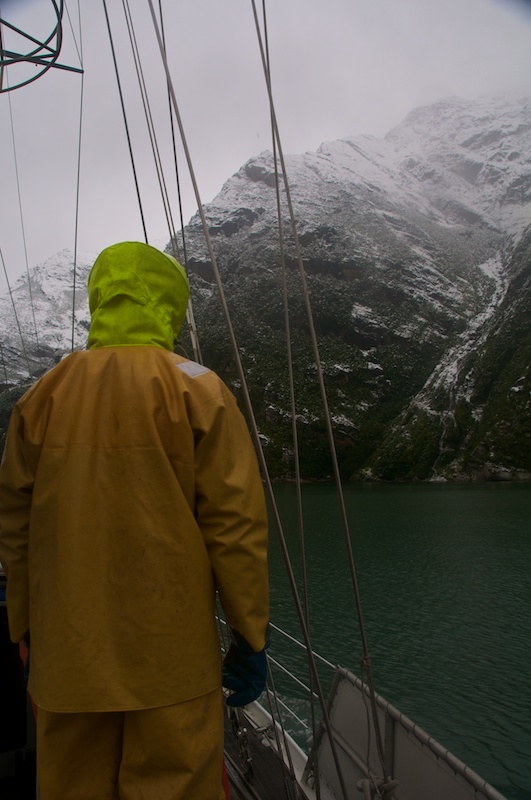 A cold day to get underway. 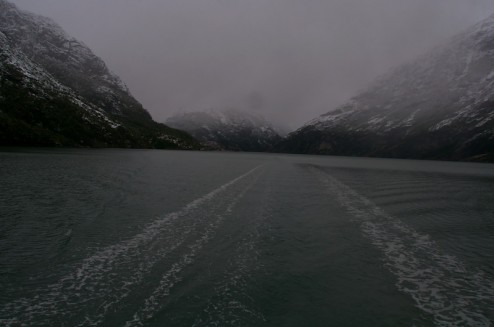 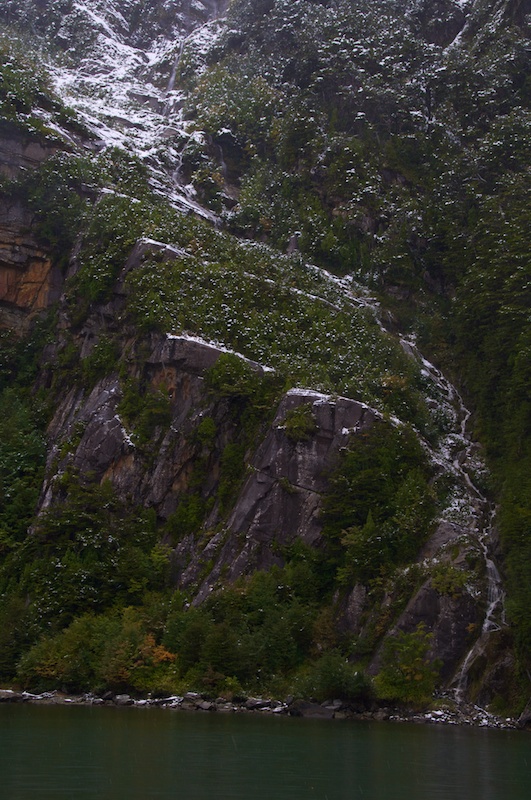 The snow highlighted terrain features and rejuvenated waterfalls as it melted. 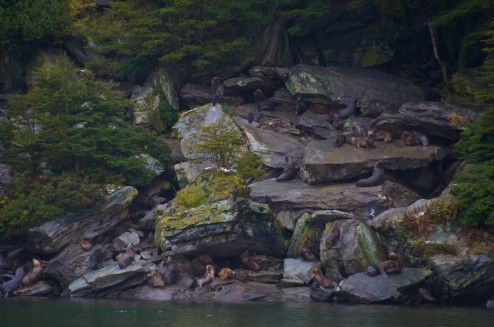 Apparently fur seals are relatively good climbers, they were all over a rock slide up to probably about a hundred feet above sea level.

We eventually yanked the zodiac back on board before we headed to Caleta Emelita on Isla O’Brien a couple of miles further West in the Beagle Channel.

Caleta Emelita and the decision

We arrived in a tiny little cove where we eventually strung out 7 shorelines plus the anchor to hold us in place against the West wind blowing in.

While we were there Charlie had to make a decision. Should we use the weather window that we had coming up to head up Ventisquero by Zodiac for possibly a day or two, or should we round the Brecknock Penninsula and head all the way around to Bahia Parry?  Ventisquero is interesting because it apparently has seemingly completely fallen apart and it would be good to have nice weather to head in there with the long Zodiac ride and a possible overnight. The problem is that the Armada might not like us taking just the Zodiac up there and Armada Control Point Timbales was right by the entrance to the fjord. On the other hand getting around the Brecknock Penninsula and heading up Canal Cockburn can be a relatively rough experience as it’s completely exposed to swells and wind coming West across the Pacific, the next landmass really being New Zealand.

After getting our first nice-ish day, we did some work preparing the boat for whatever was coming next (getting the winches working) and three of us hiked to the top of Isla O’Brien to see if radio contact into Ventisquero was possible (it’s not unless both parties go on lengthy hikes at the same time to contact each other). I also found some things that I love to see. 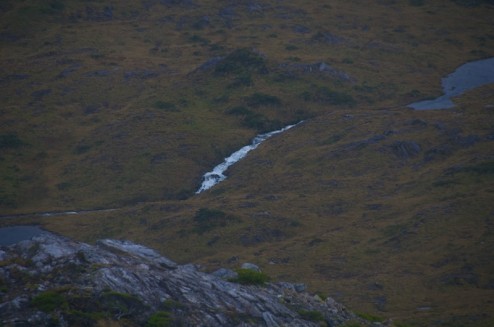 Is that whitewater I see in the distance? 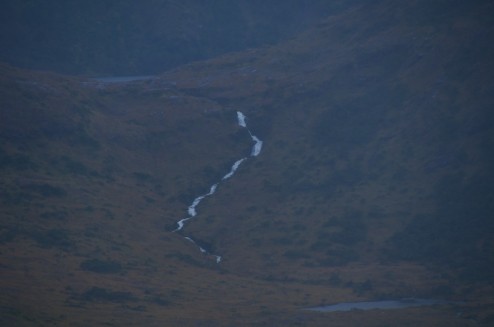 Probably a little low volume to run in it’s entirety but you can never be sure from this distance. 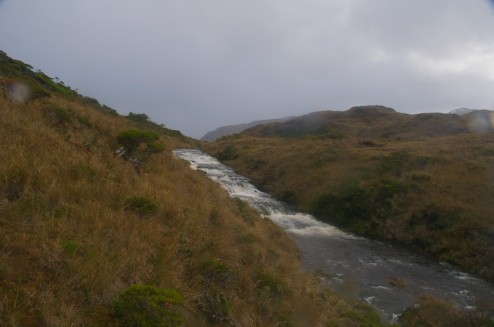 We hiked down from the peak hoping to find some fur seal colonies from up close which we didn’t find, but we did find a closer river that I like the looks of. 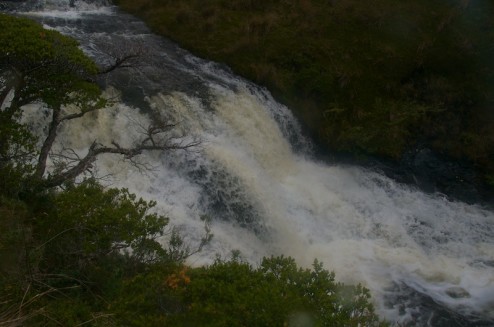 It might need a little bit more water through.

After another look at the GRIB files (wind predictions for up to five days that we get via Iridium) Charlie hatched a plan. We were going to try to sail/motor all the way around the Brecknock Penninsula and all the way to Bahia Parry in one long session. The possibility of 48 hours of motion was before us.