And I've also been procrastinating at putting this page up as it was the only one that I didn't type while I was still down in Patagonia.

After a couple of stormy days in Caleta Brecknock we scooted down towards Control Point Timbales and then up and into Seno Ventisquero.

Some nice light along the way

Funny things happen when the white balance changes part way through a panorama due to a very sharp cloud wall.

Surprised that there are clouds ahead yet? 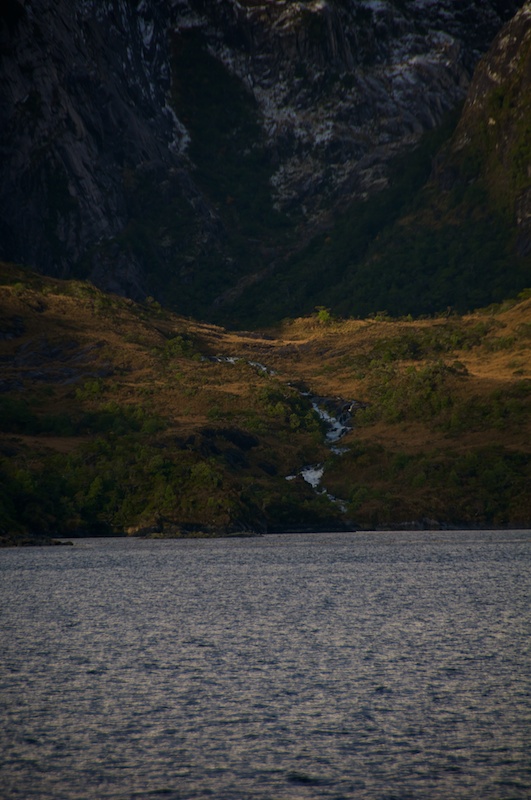 A nice looking creek coming on down. 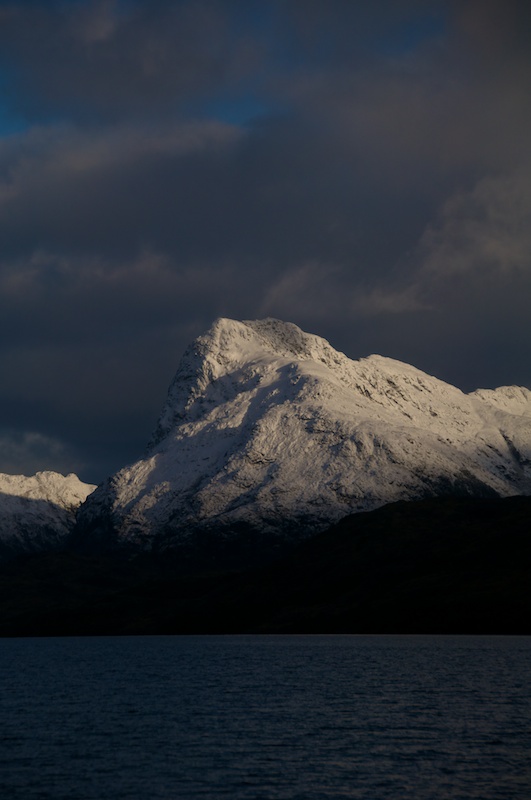 And a nice looking mountain. A whole lot of bushwacking to get up there and back though.

After a night at Puerto Engaño which was another of those rare Patagonian anchorages where an anchor was enough we were able to head up Seno Ventisquero. There is a recessional moraine that is just barely underwater about half way up the fjord. I believe it's as far as the Armada has charted. Anyway there is a channel trending SW-NE about 100 meters or so off the point that is deeper, but most of the moraine is only about 2 meters deep.

All the way up there is a nice corner that with an anchor and some lines you can tuck the boat into. 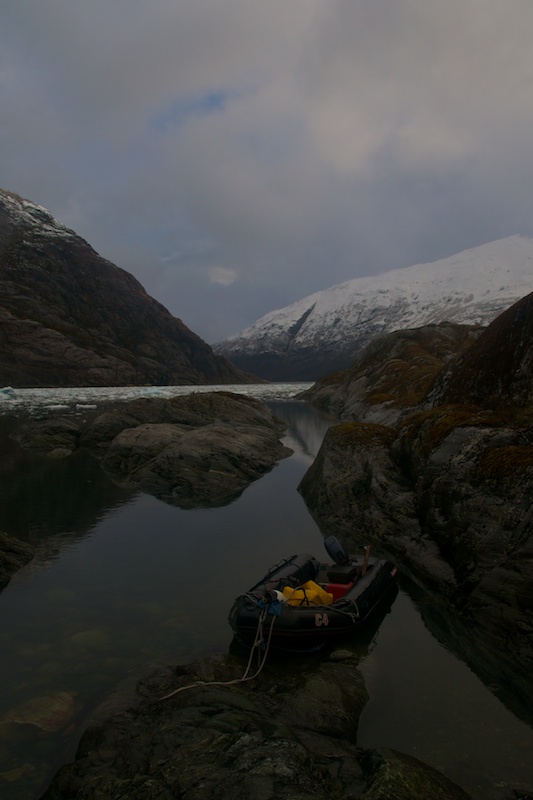 Looking back down the fjord from where we came.

More than a little bit of ice surrounding us.

And some pretty big chunks within the flow.

Charlie and I took some temperature data and then scooted our way into a tiny little inlet that opens into a much larger bowl.

Some seals enjoying the day. 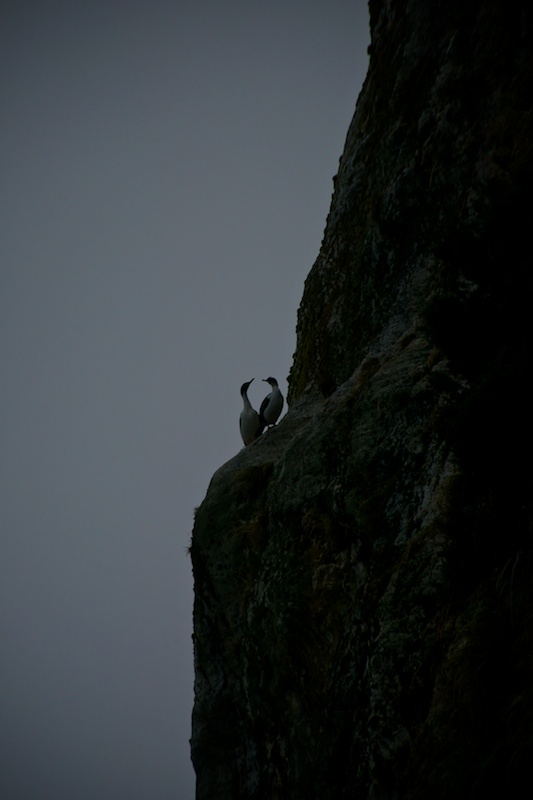 The inlet has some rather steep cliffs where shags were hanging out. I didn't notice any nests though.

The bowl had a beautiful demonstration of just how close fall and winter are to each other in Patagonia.

Thankfully fall colors don't clash with ice and snow. Though the ice did get us up suddenly during the night when a couple of larger bits snagged on our lines.

A smaller chunk of ice that made our acquaintance.

After our poking around in Seno Ventisquero we headed back to Bahia Pia. We found a lot of ice to poke around through on the way in. Eventually it cleared up some.

Though it had managed to pack itself into one of our usual anchorages. 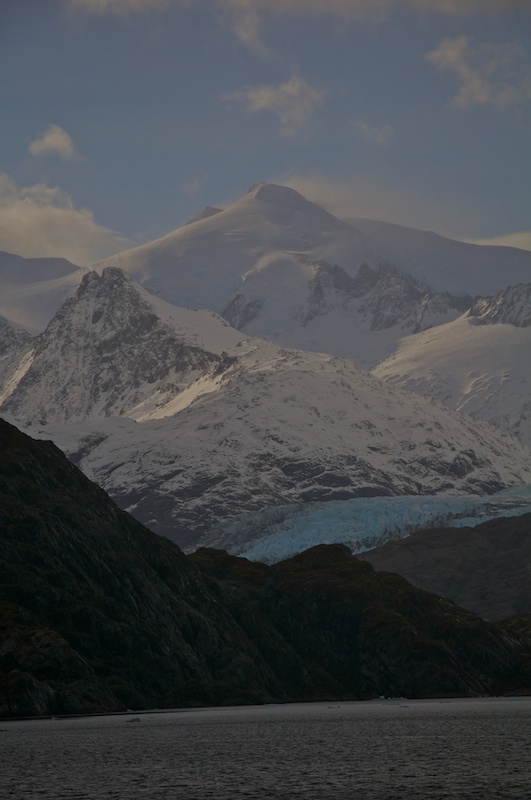 One of the many distributaries from the Romanche glacier working its way down to the sea. 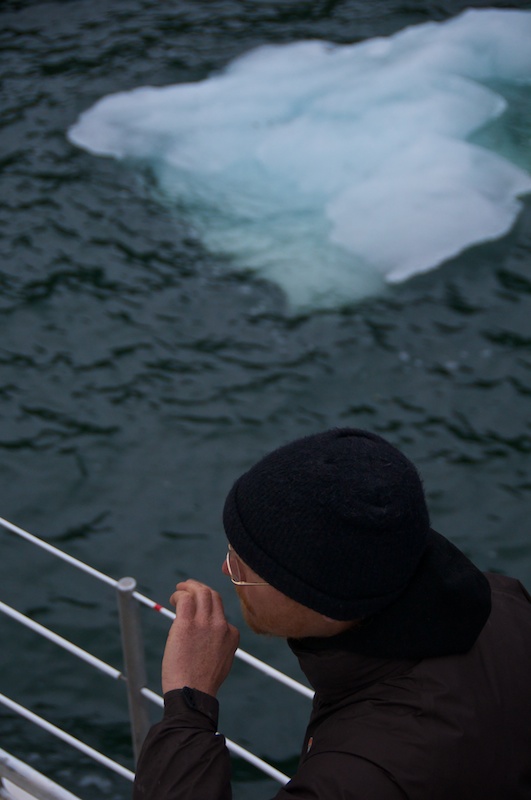 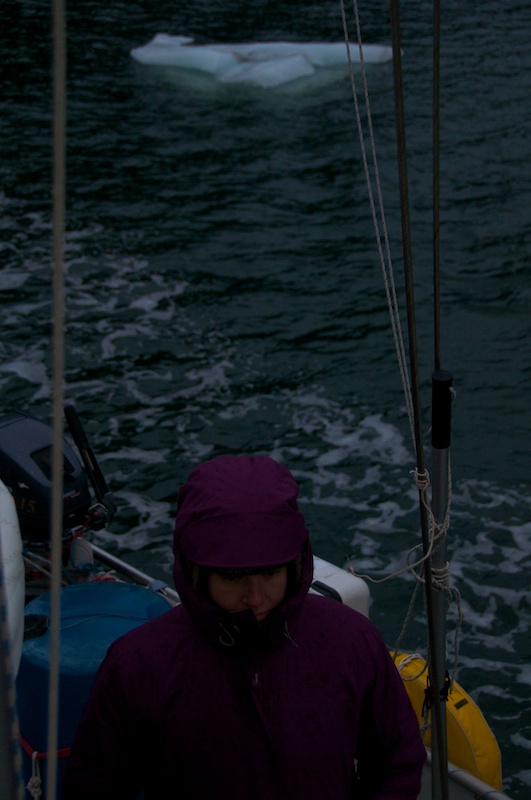 We turned around and had to weave our way though more ice to find another anchorage. We were also expecting a strong blow, so we were worried about how well were going to be able to tie up.

We ended up down that kinda backwards arm with quite a view. 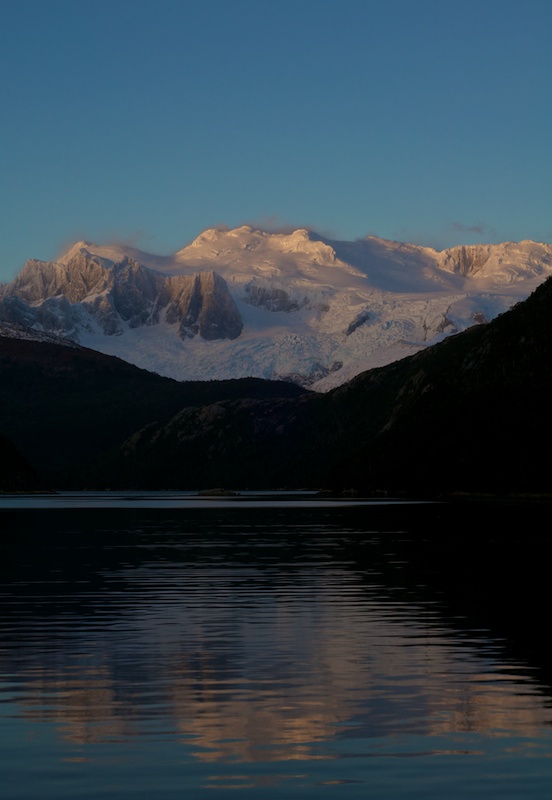 Looks like a bit too much ice fall for skiing.

Charlie went off to work on the weather station, and then we were on our way back to Puerto Williams racing another blow.

That's quite the bow wave you got there. I guess it's one way to wash out the hawsepipes.

After a night in Puerto Villerino (so close but so far) we made the last couple of miles into Puerto Williams and got a pretty nice welcoming from the sky.

The next day Doug and Jill tied up alongside us. They are known for writing the avalanche book Snow Sense, Snowstruck: In the Grip of Avalanches, and Rowing to Latitude. When they arrived in Puerto Williams there were hoping to find a fast internet connection so they could get some work done on a new edition. Unfortunately the internet was down for everyone (the power to the tower was shut off), but hopefully they have been able to get connected via something other than SSB by now!

I had a visit with the Armada doctor about the ugliness that was my hand at the time which was already improving. Eric and Christine took off for Ushuaia before a long tour around the Eastern and Central Time Zones before ending up back in Maine via plane, train and automobile. Soon it was my turn to take off. 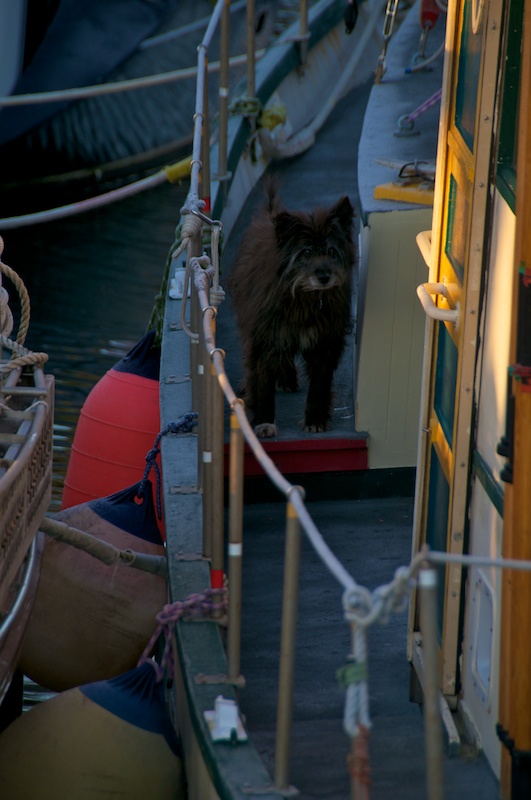 Only made one furry buddy on this trip that I had to say goodbye to.

Bye and thanks to everyone who helped me out in Patagonia.

A special thanks to Charlie Porter for making my whole experience possible.

One totally odd shout out to the KEXP Live Performances Podcast. It's kinda like getting a whole bunch of random concerts from Archive.org without the whole problem of figuring out what you want to listen to which was awesome so that I didn't end up listening to the same concert a million times, and didn't end up with 47 Gigs of Greatful Dead if I just downloaded from Archive.org.