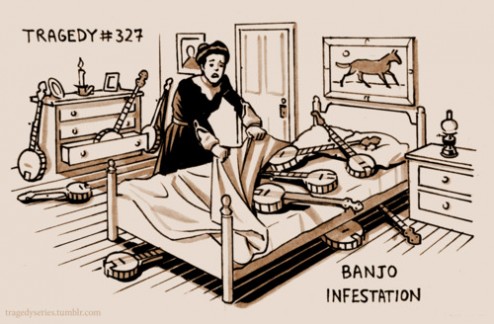 from the Things Could be Worse series

Of those I wouldn't suggest partying the night before a triathlon or paddling new stuff right after a hurricane. Though all were fun. 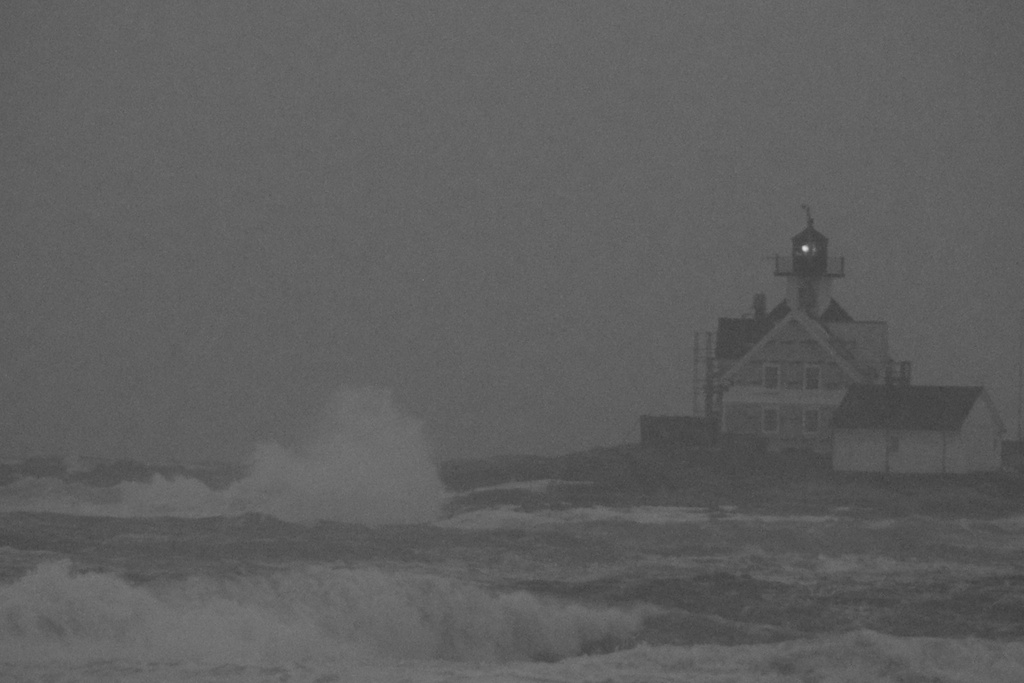 After watching Hurricane Irene roll through Boothbay Harbor which thankfully only knocked our power off for a short period, but sent some massive waves crashing into Cuckolds Lighthouse and a nice sunset over Wiscasset airport, I headed over to NH for some paddling with my buddy Doug.

In NH we found our way aroun the roadblocks and flood damage to paddle the South Branch of the Baker, Pond Brook, and the Hancook Branch into the East Branch of the Pemigewasset. Doug was able to bring me up a creek boat to paddle in, because it would have turned into a much longer and harder day if I had been in my CR125 as we paddled about 12 miles and about a quarter of a vertical mile of drop that was all new to me and pushing the limits of what I can paddle in an unfamiliar boat.

On the South Branch of the Baker we met up with Josh Early for his second lap of the creek as it was dropping quickly. During the summer of 2010 I helped Josh teach a beginner I whitewater course for Maine Kayak, so it was fun to paddle with him. I swam and then walked a bunch of stuff at the top (obviously it was the unfamiliar boat), I got back into the swing of things, and by the time we made it through a big looking slide at the takeout I had figured out the boat enough that the slide didn't feel a quarter of the size that it looked. After playing retrieval and saving Doug's car from getting smooshed by some construction equipment, Josh took off to finish packing being the third or so of the New England paddlers I know that was heading West  to explore. Have fun out there.

Doug and I went back over to Pond Brook  to set shuttle. We had originally looked at Pond Brook but Doug realized that the water would disappear over on the South Branch of the Baker first, so we changed our plans around. Anyways, I once again swam right at the top after trying to duck under a pair of crossing logs. Doug claims that the trees had dropped since his last time on the river when they had much more clearance to get under, but as I was yanked out of the boat by catching my chin on a ledge I was spending more time thinking "Grr, short people" between "Ouch!" Makes me think that a full face helmet might be somewhere in my future for more creeking. The rest of the run turned out very nice though Doug and I both walked a relatively large slide that slams you sideways into a rock and then you have to avoid or boof over a pretty good sized hole. The run finishes up with a sweet 8 foot boof which is pretty much right in someone's backyard.

Doug and I then boogied back over the Sawyer highway which is also the name of a river which is cool enough that I know a couple of boys have been named after it (though unfortunately the river is on the other side of Mount Huntington from the Pemi). After dropping a boat at the bottom of the East Pemigewasset at a pretty wrecked looking park behind the fire station we headed on up and turned onto the Kancamagus Highway. The highway was closed passed the campground so we took advantage of their trail to hike down to the river. Doug had bailed from this river during the storm when it grew by an order of magnitude while he was on it and had seen it start to carry trees down river, so we knew we were going to be getting into something different. Quickly my definition of large strainer had been reevaluated and I spent a good bit of time trying to hike around the silt and debris covered floodplains. At places it narrowed out and there was flood evidence 15 feet or more above the current water level. Lots of slides, slumps, and flagged trees all over the place. Frankly the river needs a crew with a couple of chainsaws and turfers and maybe a flamethrower.

The river calmed down as we approached the East Pemigewasset so I was able to spend most of my time in the boat except for scouting around the Loon Mountain Bridge rapid. That rapid would have to go right need the top of the 'I can't remember the rapid, but I can remember the surroundings' list, though for a couple of unique reasons. While scouting and hopping back into my boat there was a backhoe throwing boulders around next to me, and apparently just a couple of hours after passing under the bridge that the backhoe was apparently trying to take care of it partially collapsed! Apparently the rapid is way easier than it used to be and we ran it all the way on the the left. After that the most memorable part of the river was running the sneak route a Mill Dam rapid backwards as I missed the eddy at the top! Pretty soon we were back at the destroyed park and I boogied down the road back to Mass to help out around my dad's school. Unfortunately there are no photos as I had very little time to stop and shoot while we were covering so much milage. Hopefully I can recover a little footage from the GoPro but the lens was scratched (fixed now).

Some puttering around the school later my dad and I headed up Mount Monadnock. 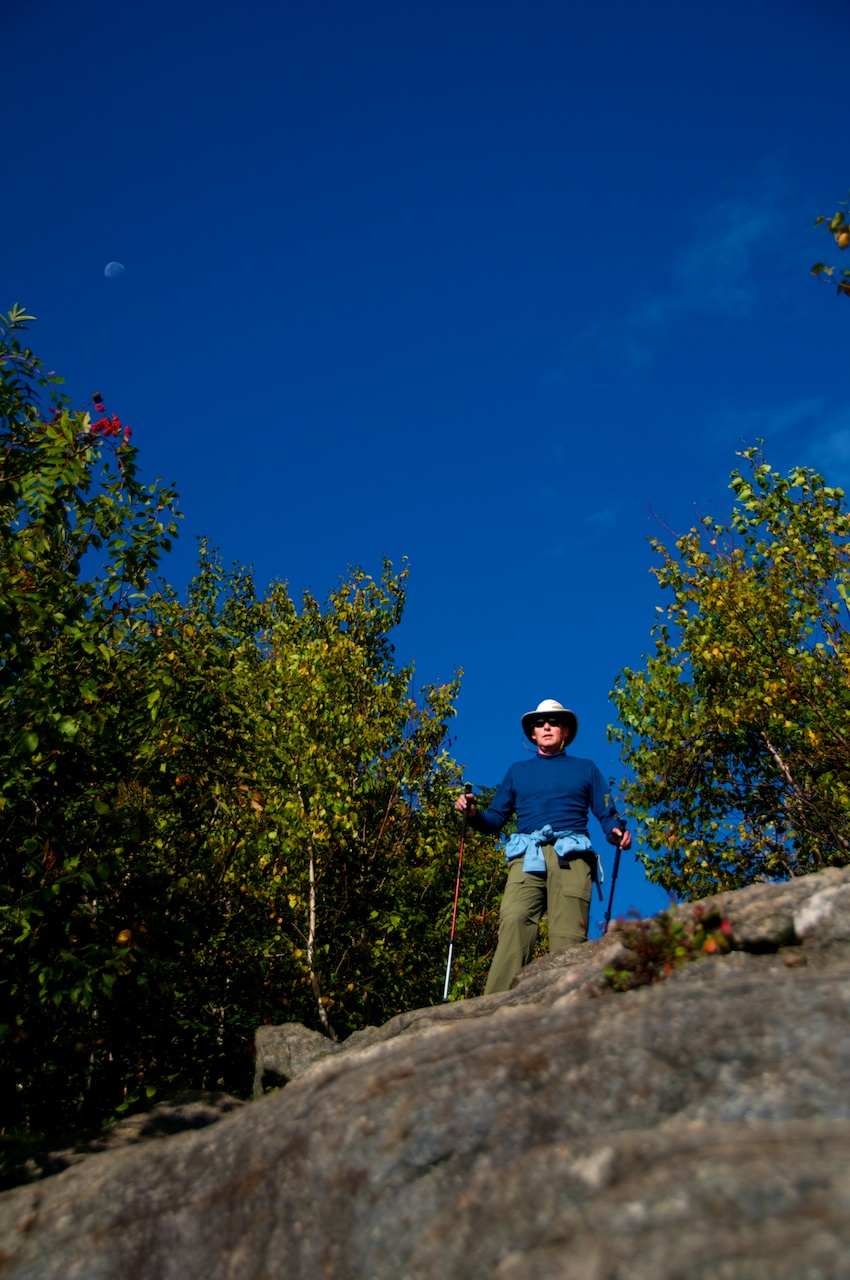 At some point I headed back up to Boothbay and tried to enlist some cohorts to paddle the Rapid river which was releasing at a nice level, but no one wanted to go from there, so I headed to bethel because I heard that the Mannings were having a get together. It turned out to be Alumni weekend and I made for 5 five year alumni wandering around Bethel. Eventually I made it up to Frenchmans and crashed for the night. I made it back up to Bethel a couple weeks later to drop off some photos with my pottery teacher which are now hung at the Mill Hill Inn.

I climbed down into Frenchman's Hole that night and took a couple pics of the stars. I'm hoping to get back up there sometime there isn't a full moon or partly cloudy so I can get some shots of the Milky Way. As is you can see a few starts. 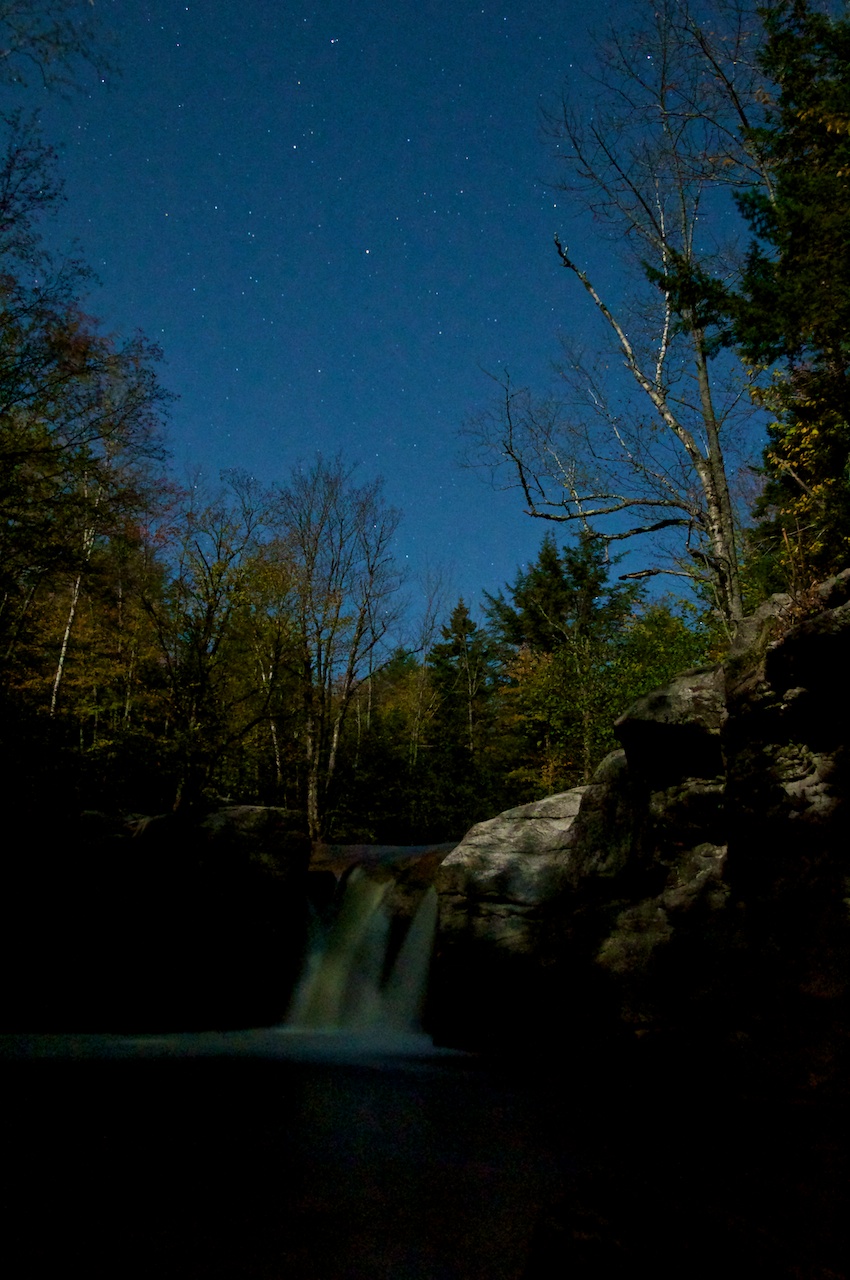 Continuing my artsy photography kick I bounced around Grafton Notch. I came around one corner to find the road blocked by a whole herd of forest rangers, so I climbed down into the creek nearby. 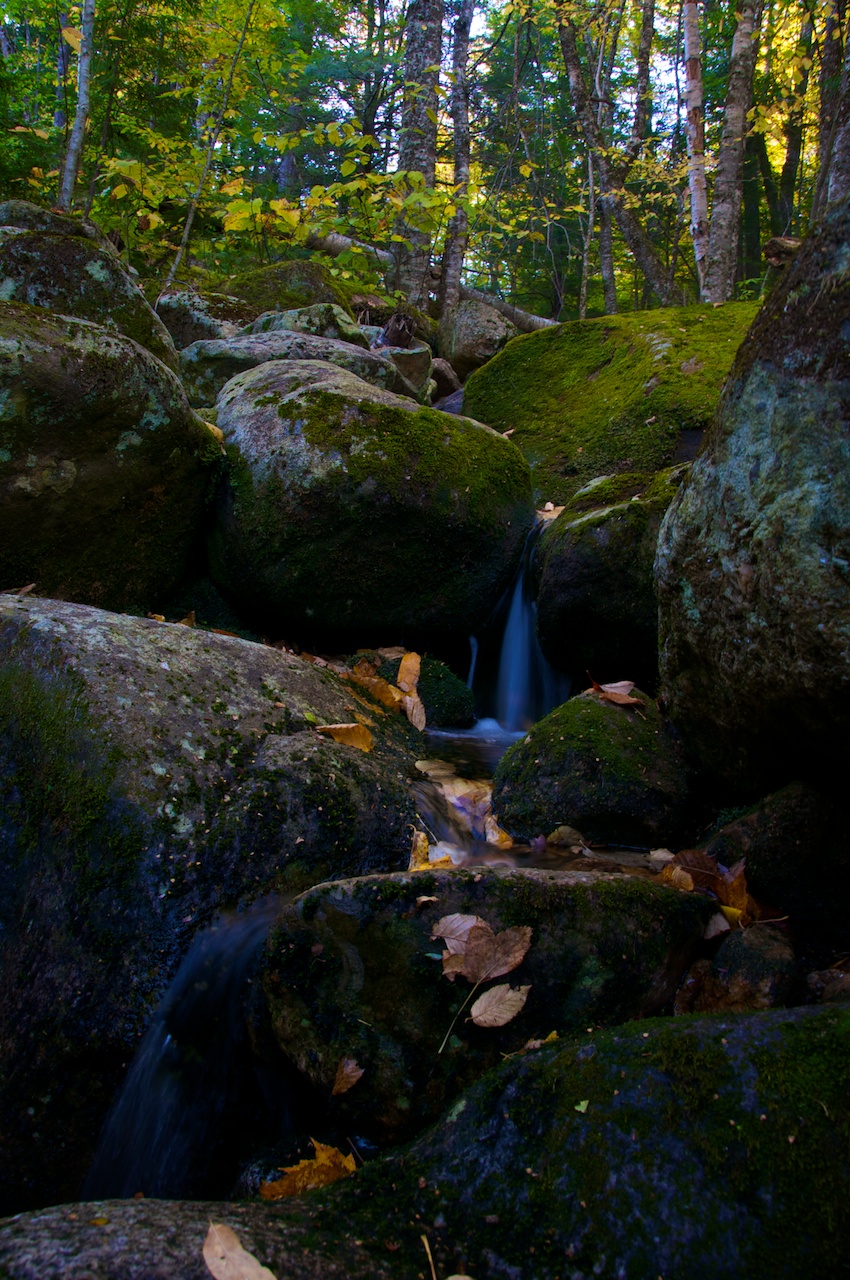 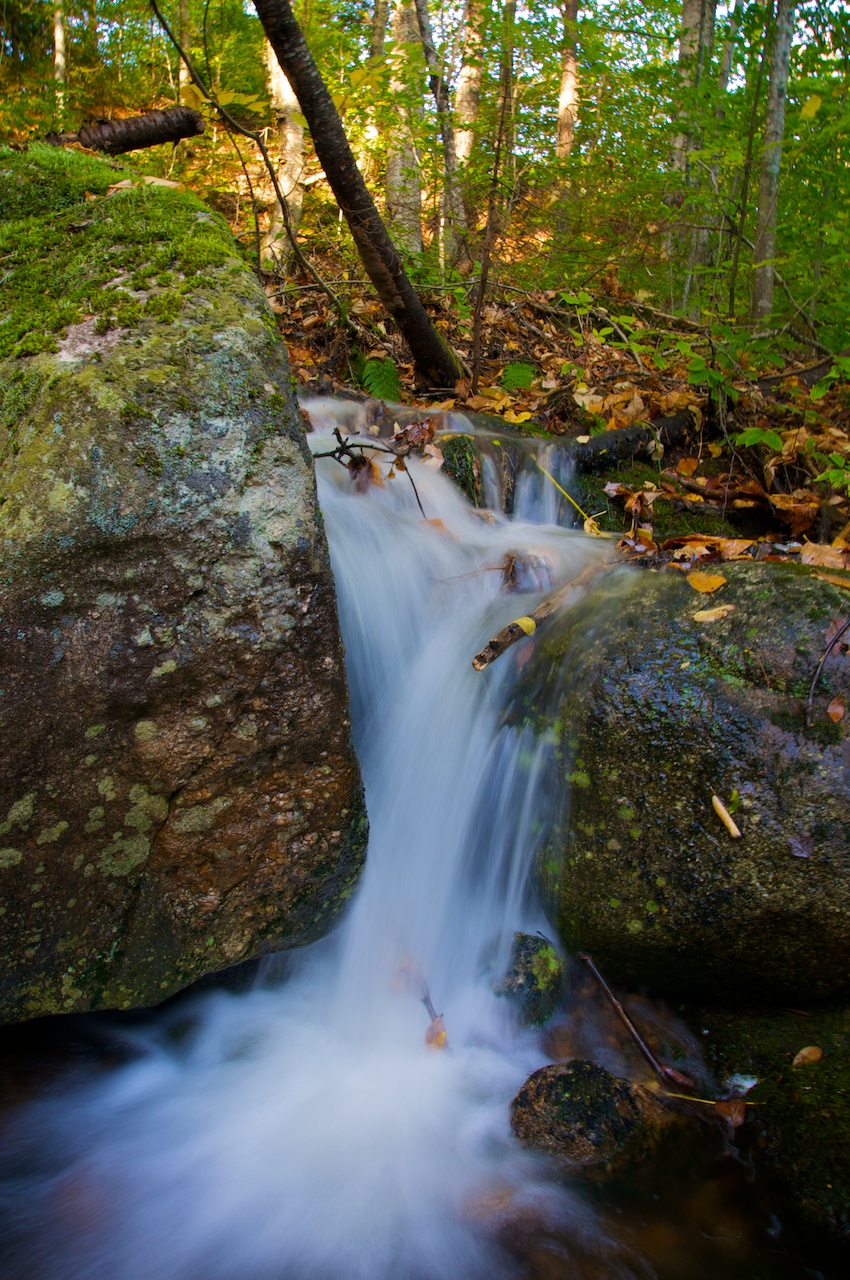 I continued a little further up the road and then dropped into Mother Walker Falls gorge. While I think with the right water you can paddle Screw Augur Falls just downstream (which is also easier to access), it's probably not possible to run Mother Walker Falls. One way or another, it's pretty down there. 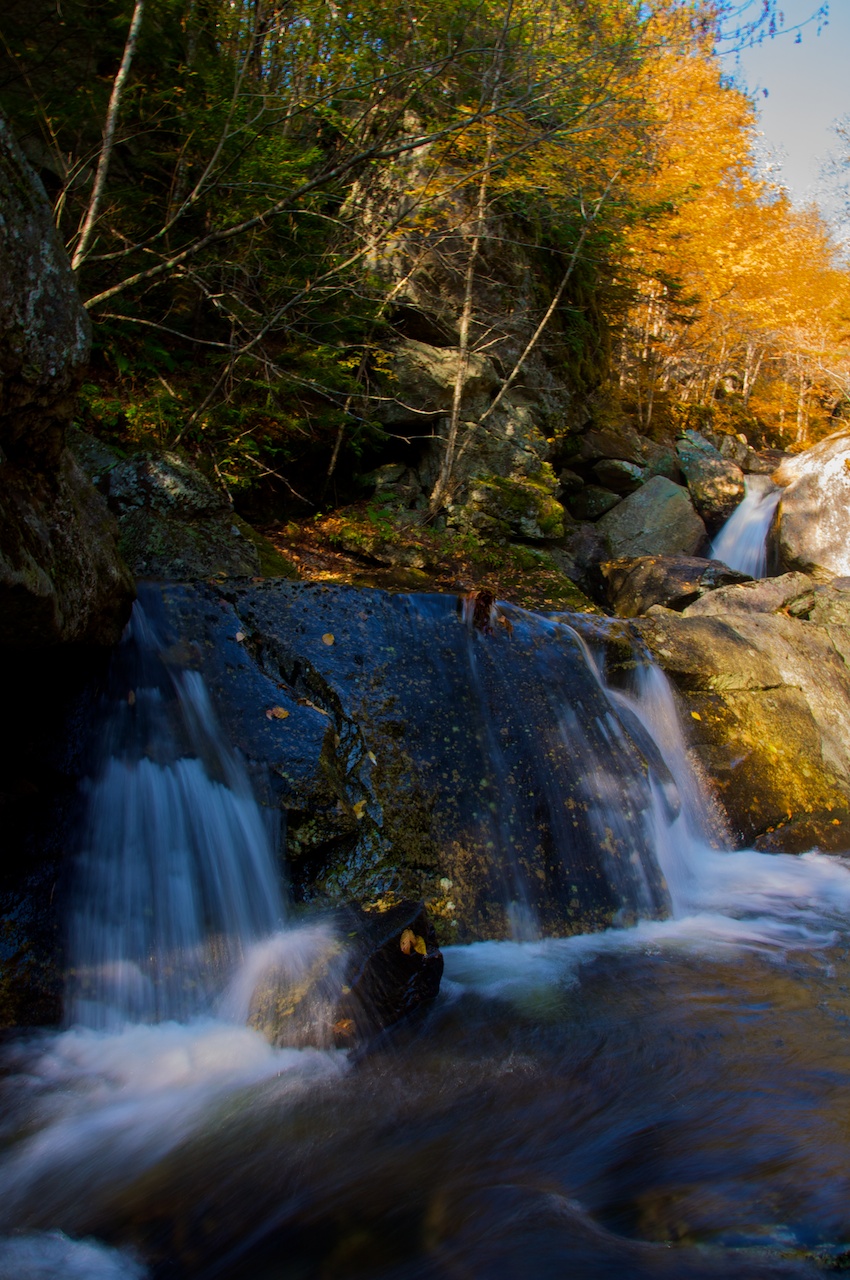 At some point in there I paddled the Upper Ashulot river in NH. I decided that running Gilsum Gorge at the bottom of the section was a bad idea after setting shuttle. The rapid of note required either a cool looking slider boof thing or getting lucky with a really sticky looking hole. So I ended up walking down river to get the car. There is a cable hanging into the run in the obvious line somewhere just as you hit the town of Gilsum. It looks to be loose at the end and hanging down off of a telephone pole that was strung across the river and broke loose during the flooding.

This last weekend I headed up to Vermont for the annual TGR forums East Coast UllrFest and the White River Disas-Tour race. UllrFest is the pre-ski season party with a pig roast and movies projected on the big screen. There's also supposed to be a band, but they bailed on account of the conditions. I guess that's what happens when something is scheduled at the same time as MooseFest where it usually snows. After helping to set up and the preliminary rounds of home movies we watched The Art of Flight which is a new Red Bull snowboarding movie. While it's pretty much the result of Red Bull throwing money at Travis Rice, Brain Farm came out with something pretty amazing looking. They did go down and try to ride in Cordillera Darwin but I missed seeing that part as the generator (the same style as I was using in Patagonia) decided to run out of petrol during that segment (as I'm yelling at the screen to drop fuel at Calleta Olla).

I went to bed during the next movie as I had to wake up early for the White River Disas-Tour triathlon. I had failed at getting anyone on the forum nailed down for any legs of the race, so I brought my bike and a pair of my dads running shoes up with me. On the way up I also picked up my skis, boots and avalanche gear which Willie had been using over the winter, so I was pretty well loaded for bear. I did find someone for the running leg of the race who had graduated a year after me from Colorado College. The start of the bike leg was pretty painful, but thankfully the boat leg wasn't bad. I rented a LiquidLogic Remix XP 10 from Clearwater Sports up the road which was much nicer than trying to paddle my CR 125 down 4 miles.

Now I'm back in Mass, looking for a full time job, but I've got a part time opportunity set. I'm also working on two videos. One is for a competition to win a kayak, and the other is just a general summary of the paddling so far this year. 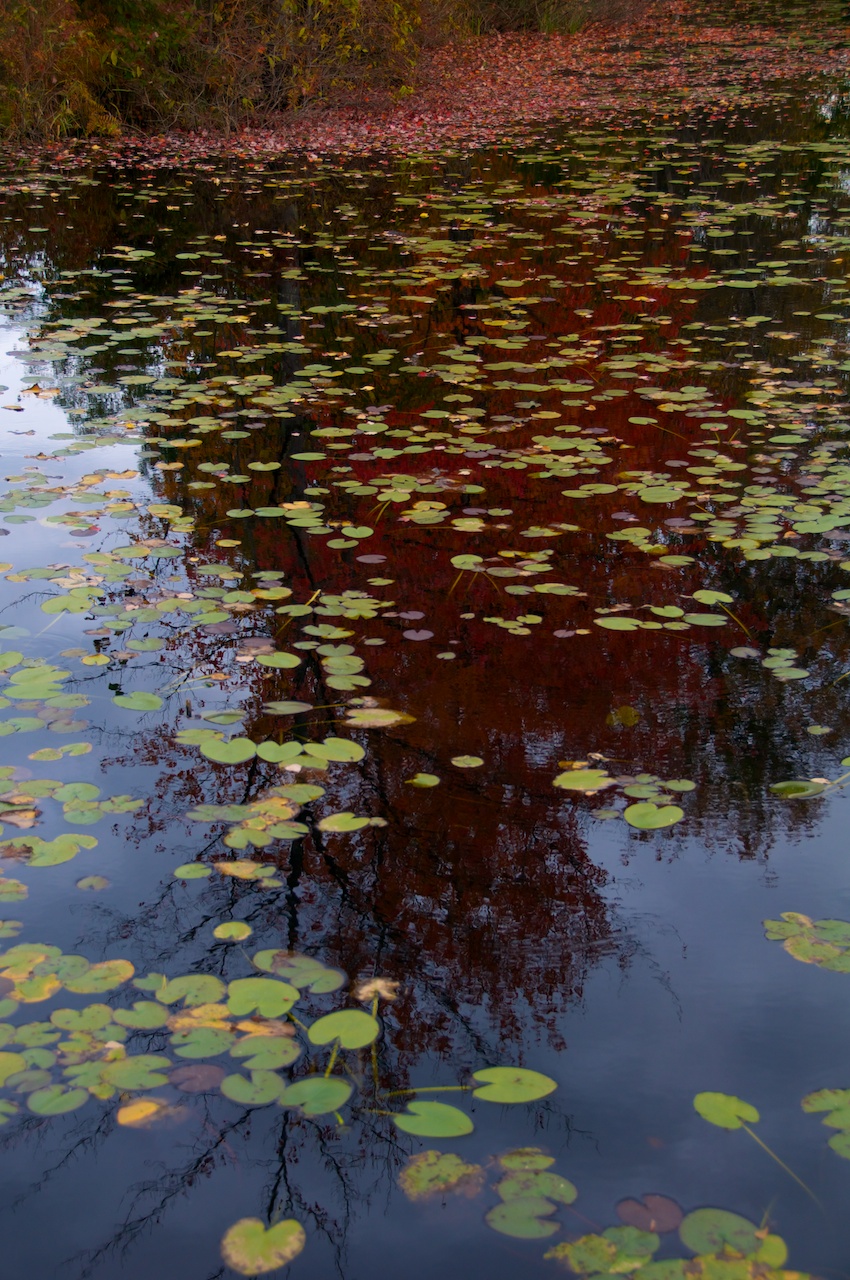 It's almost ski season in the Northern hemisphere, so what should I do with my site? Oh ya, realize I don't have a ski portfolio setup. Well it's up now. Check it out here.