Andii and I decided to explore the Mahoosuc Mountains over the weekend. As covering more terrain is usually more fun I looked for a loop. Day hiking loops in the Mahoosucs aren't the easiest to find, but they are there if you are creative, and have a sense of where there are trails that are not marked on any maps. Such as up Bull Branch to Mahoosuc Notch.

There's a few old logging roads that look like they get close to the notch looking at Delorme's and topos, but eventually I found mention that Outward Bound keeps a trail in up there. While hanging around Bethel this weekend I found that some of my high school teachers help keep the trail marked with orange and pink flagging tape. Looking at maps it's exactly where you would expect it to be.

Anyways Saturday was forecasted to be 75° and sunny but the Mahoosucs had their own plans. We woke up to find it overcast and misty which left me a little worried for the jungle gym that is the notch. As such I don't have too many pics from the trail up Bulls Branch and the photos start with a view into one of the simpler parts of the notch. 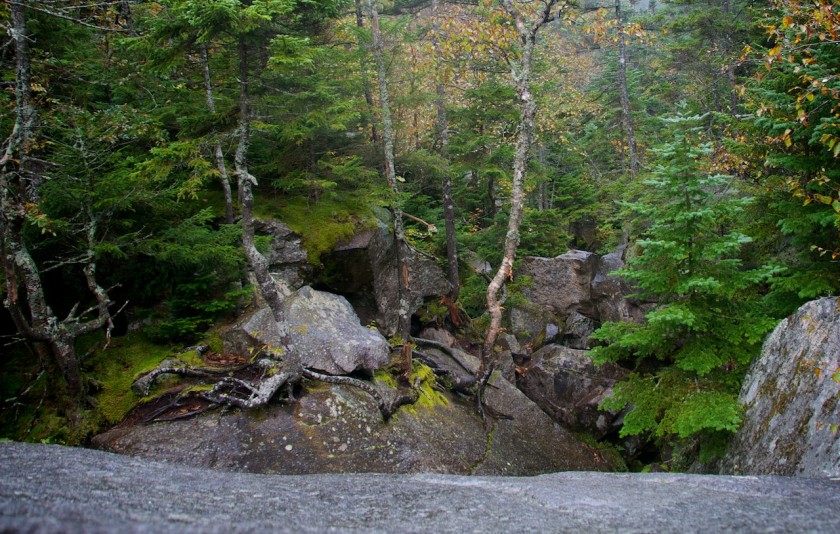 The Appalachian Trail through Mahoosuc Notch is comprised of scrambling over, around and under boulders dropped from the cliffsides on either side of the notch. The notch itself was carved during the last ice age but soils and vegetation couldn't colonize the cliff faces fast enough once the ice retreated to stabilize the cliffs and they came crashing down. 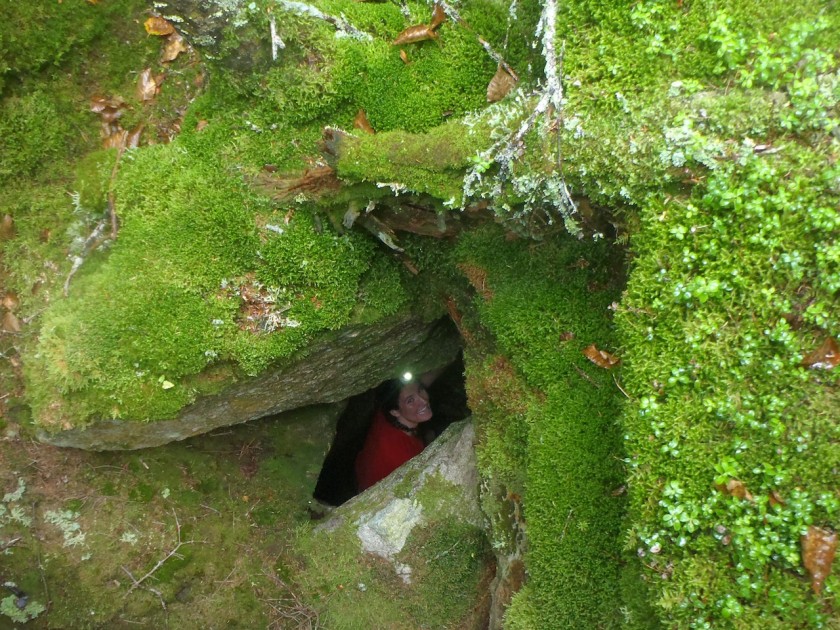 Andii tried to figure out just how far under the notch she could travel.

As we climbed up out of the Notch the sun decided to make it's appearance and we were able to see the clouds that we had been beneath.

Panorama from the top of South Fulling Mill. Definitely click to embiggen.

Apparently we are supposed to head this way. 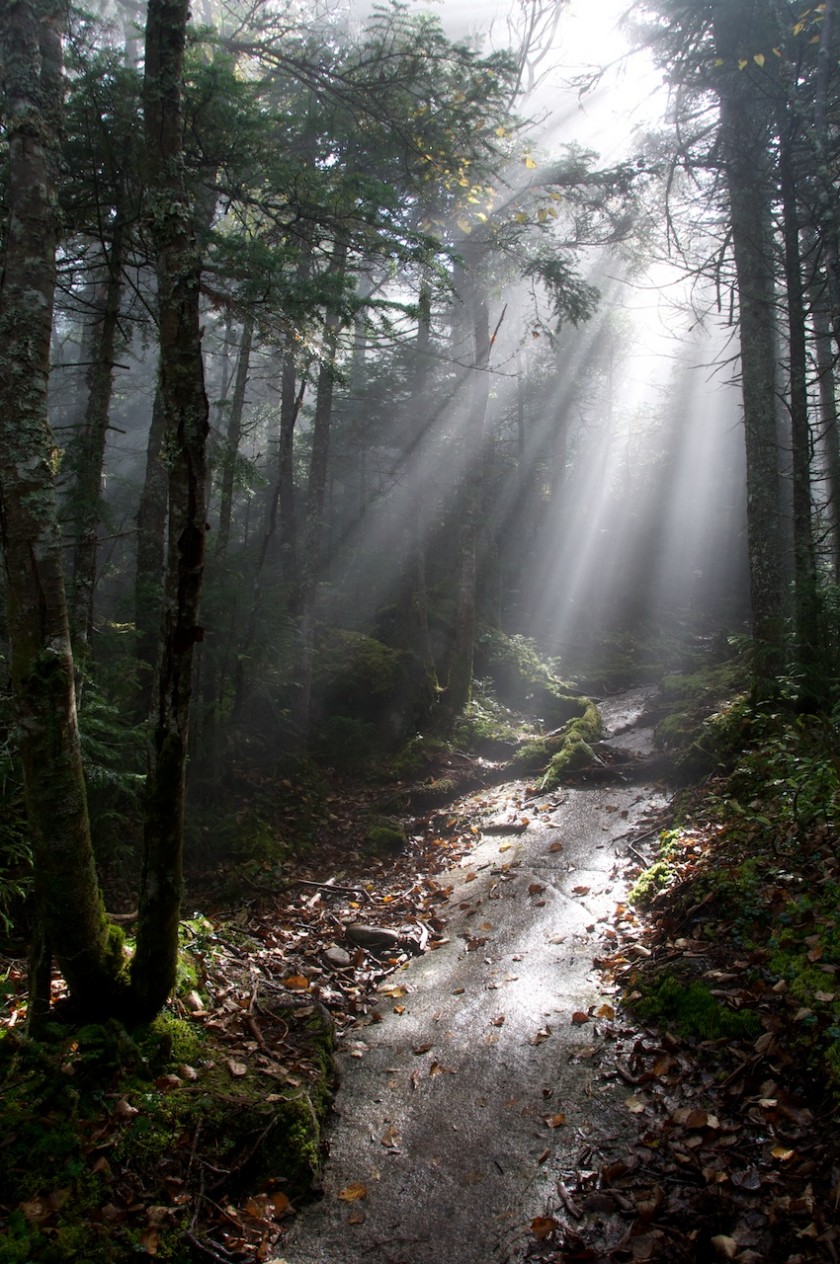 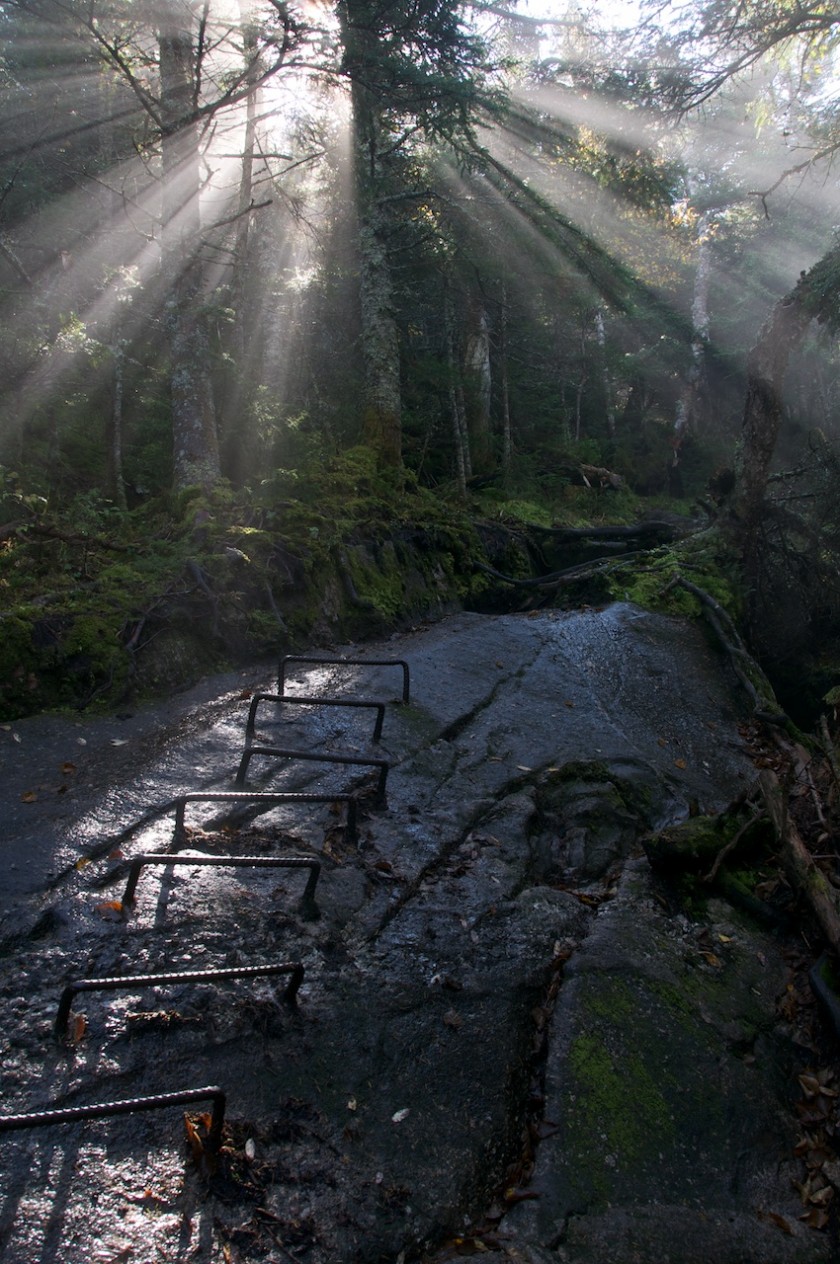 After the gorgeous trail past Full Goose shelter, North and East Goose Eye Peaks we made it to West Goose Eye where we relaxed a little and had lunch. 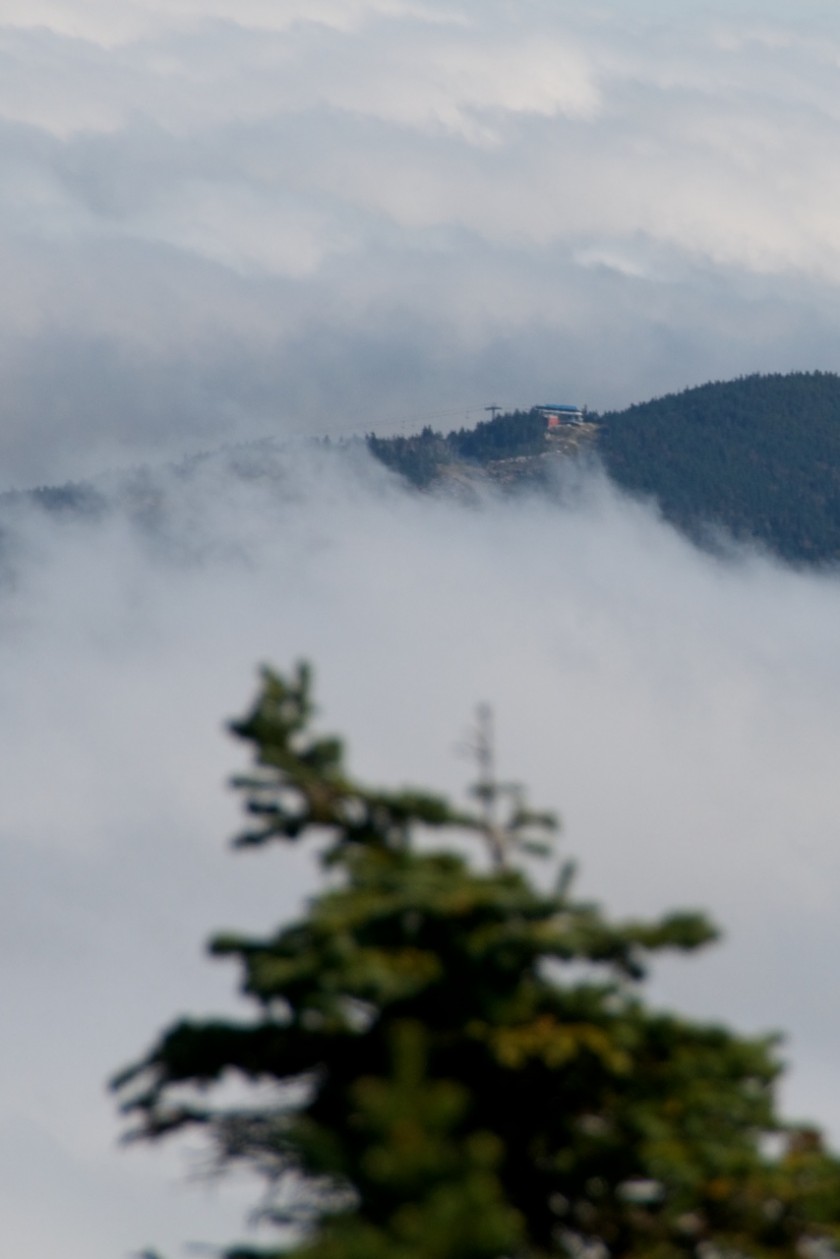 I even saw a very familiar sight to the South East, though from a rather new angle for me.

After lunch we left the AT and headed down the South Fork of Wright Trail which wanders around the South side of East Goose Eye before spending much of it's time near the ridge on the way down. 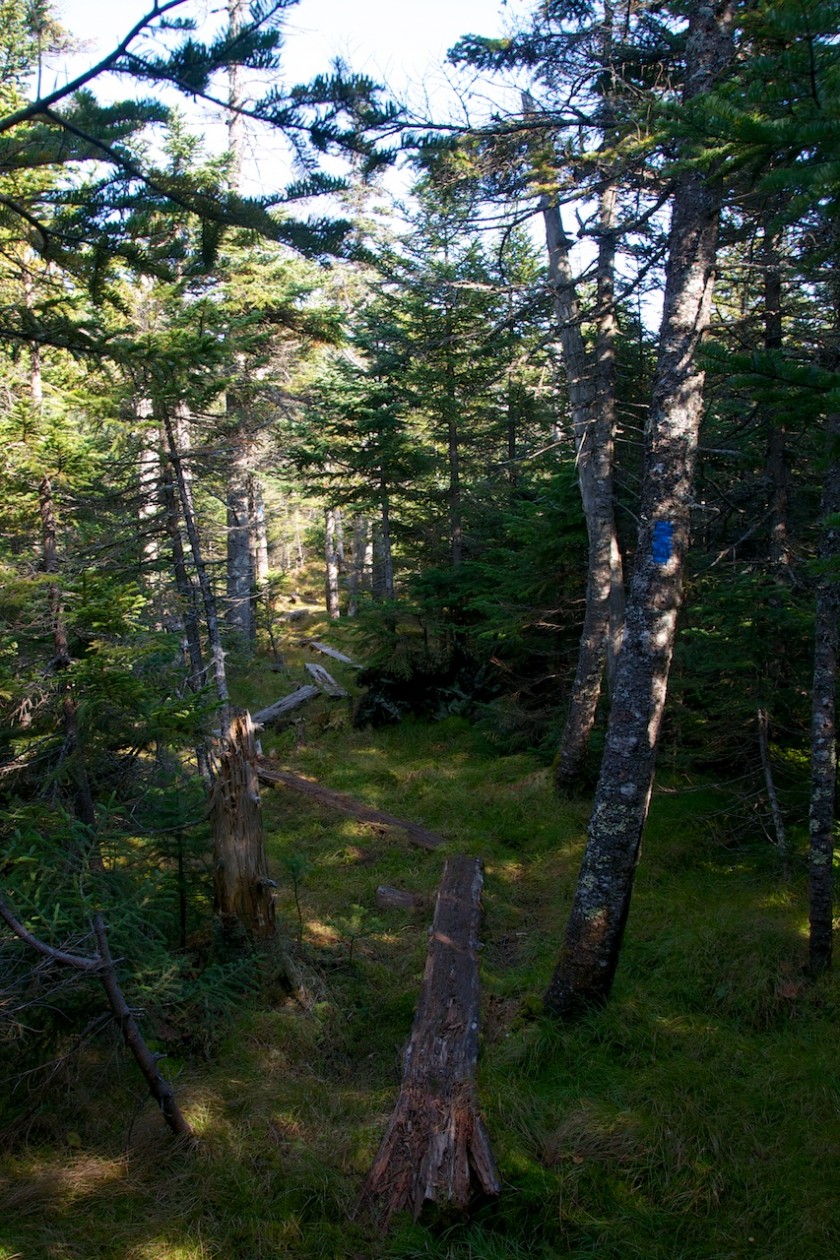 We don't need no staples or fancy boardwalks once we're back to blue blazing it. 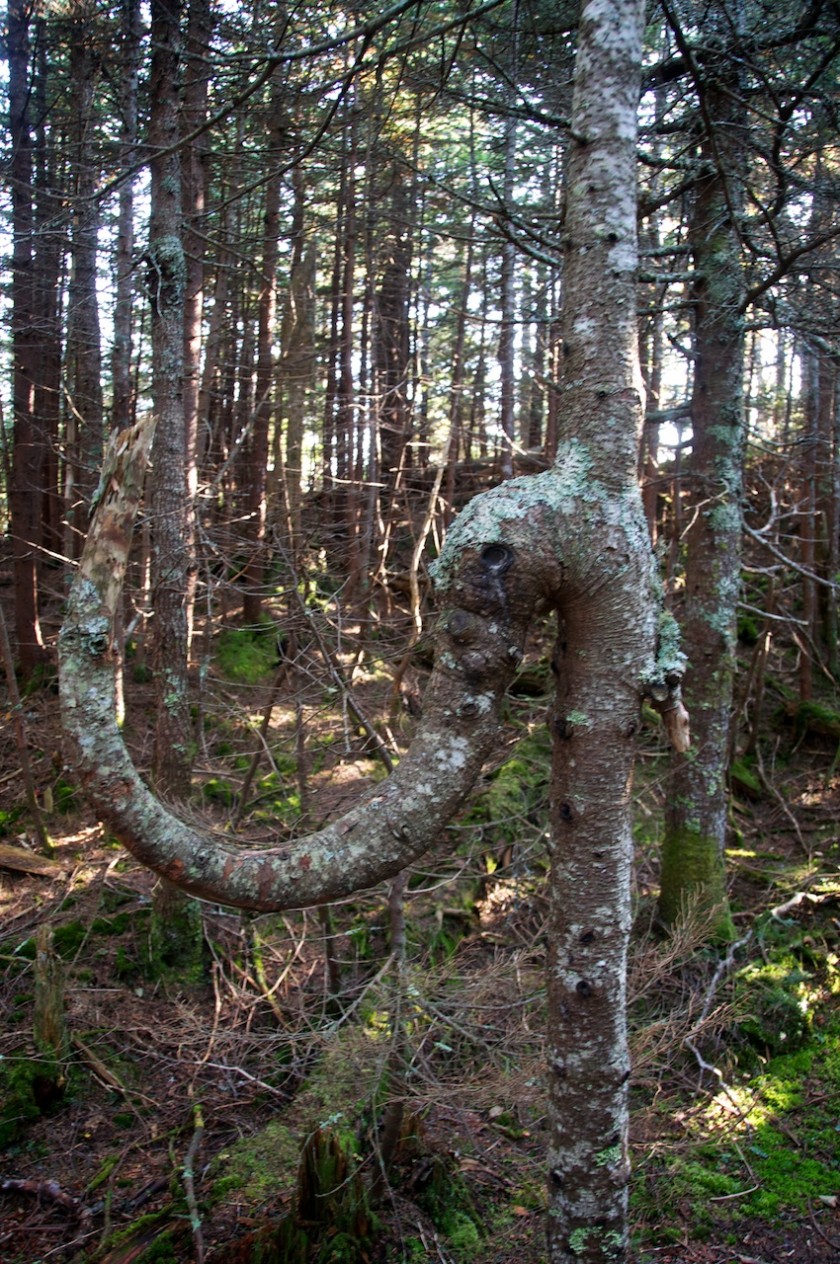 We may have been a little tired as the pink elephants were leading the way down. 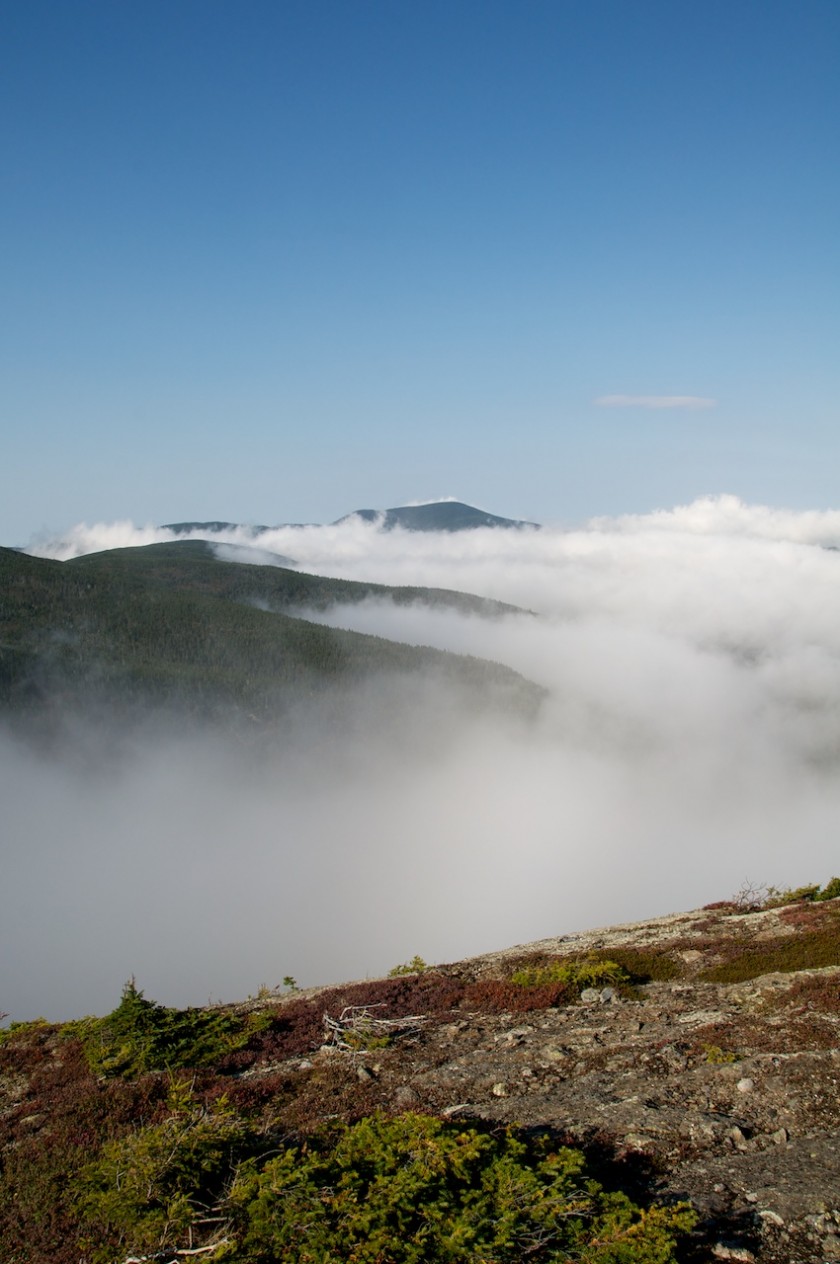 The clouds rolled back in as we descended blocking many of our views of what looked like it was going to be the most colorful drainage. 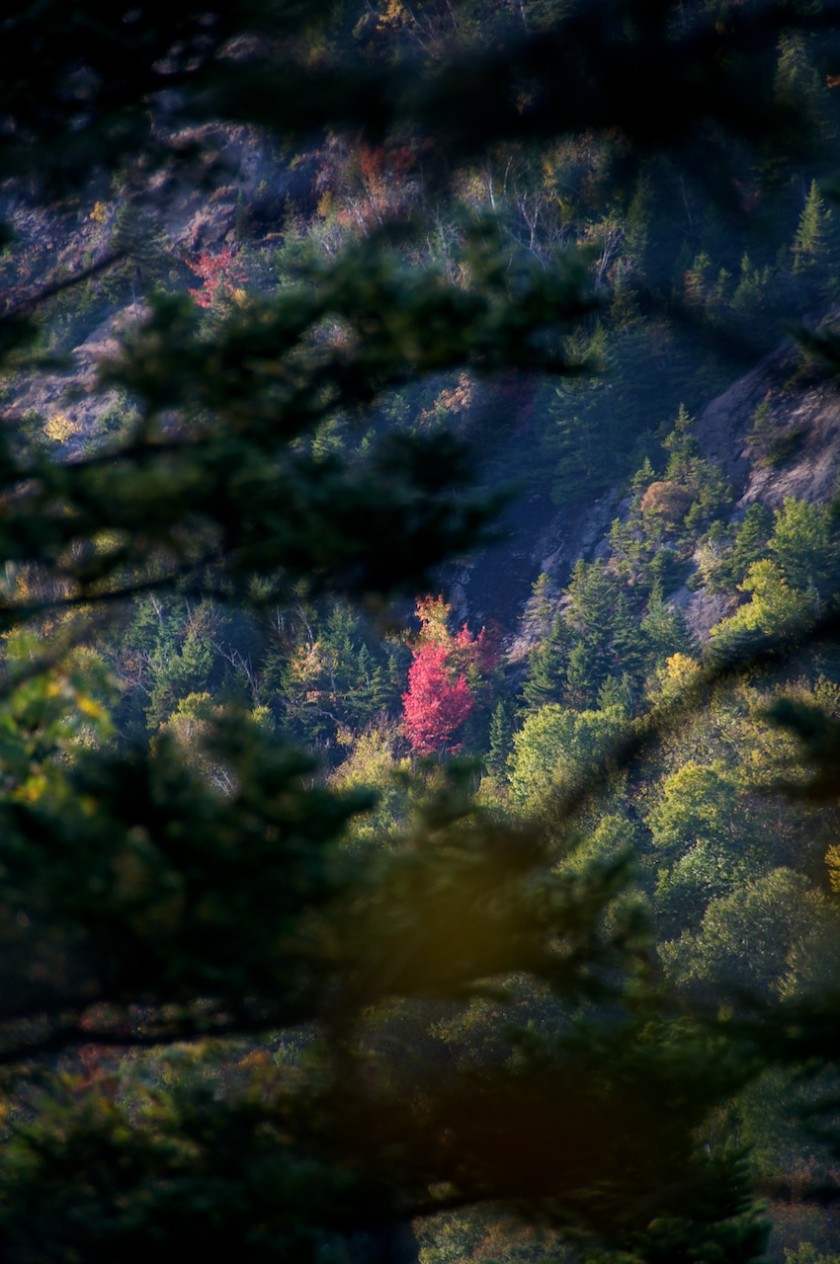 We managed a glimpse or two of the color.

Just as the two forks of the Wright Trail merge the trail begins to follow Goose Eye Brook down. While it will need some wood work before it's good to go, it looks like it would be a very cool run thought it likely takes a hurricane or snowmelt for it to run. There's even a logging road that would save you from having to hike up the narrower riverside trail with a boat for the gorge and slides at the bottom.

Pictures roughly working down from where the logging road joins the trail. Any boaters interested in this, I've got a whole lot more pictures of the wood and other worries, just give me a holler. I'd also love to head over there to take photos and set safety if anyone was actually gonna run it. 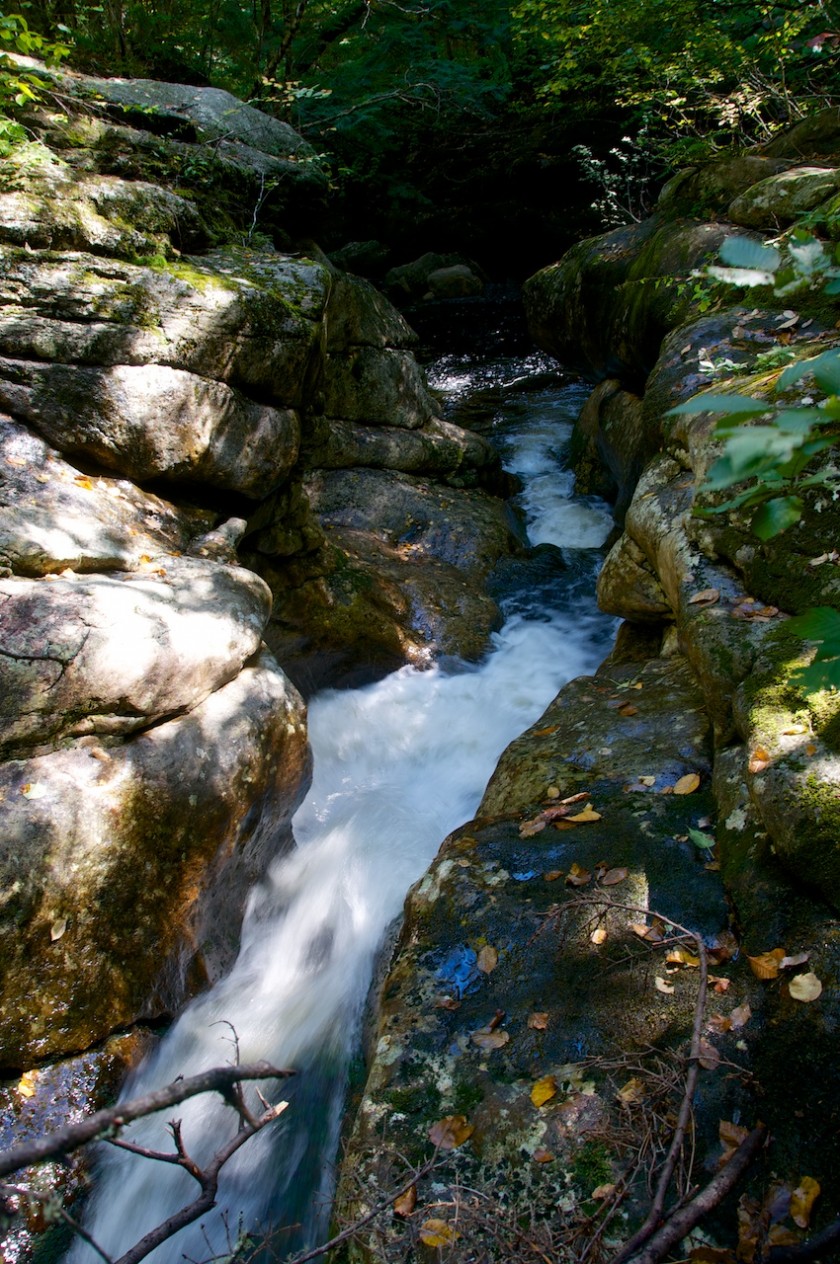 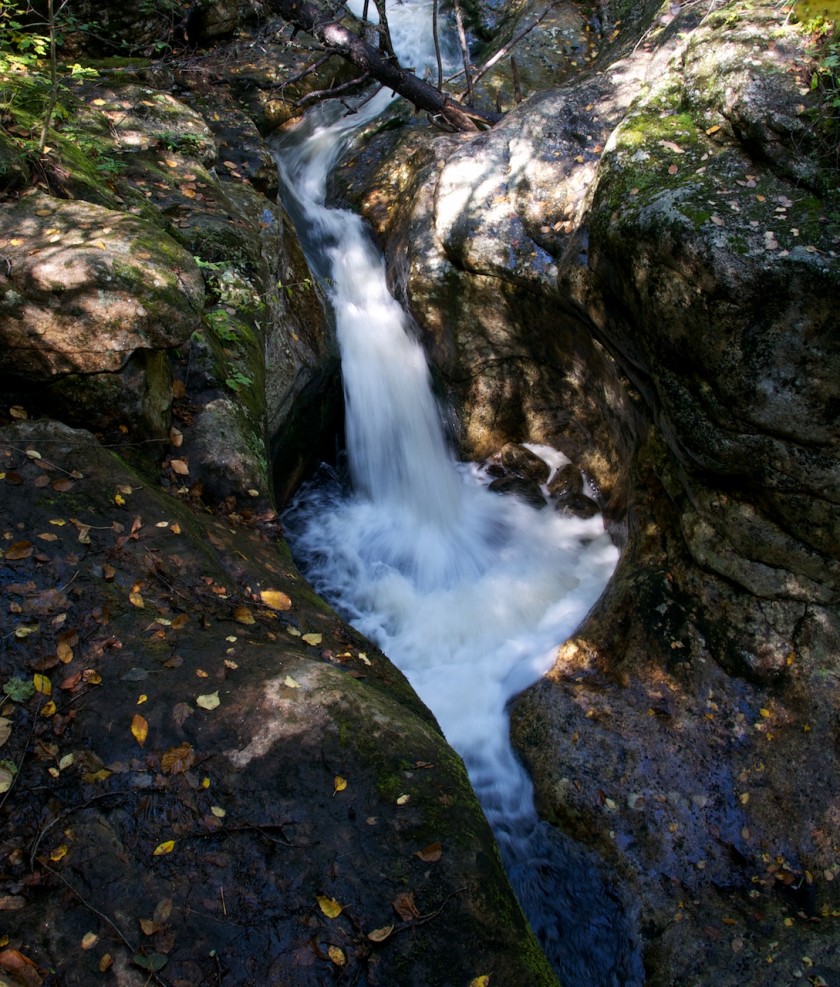 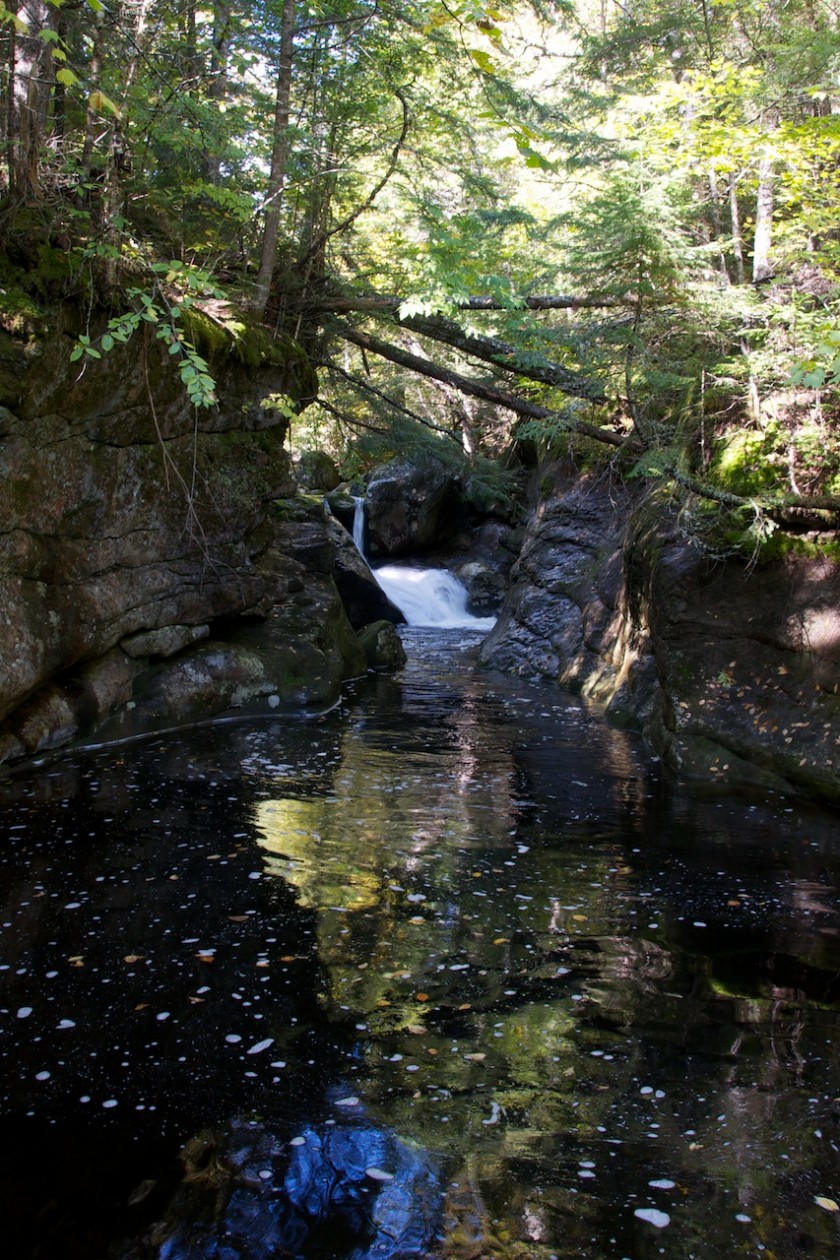 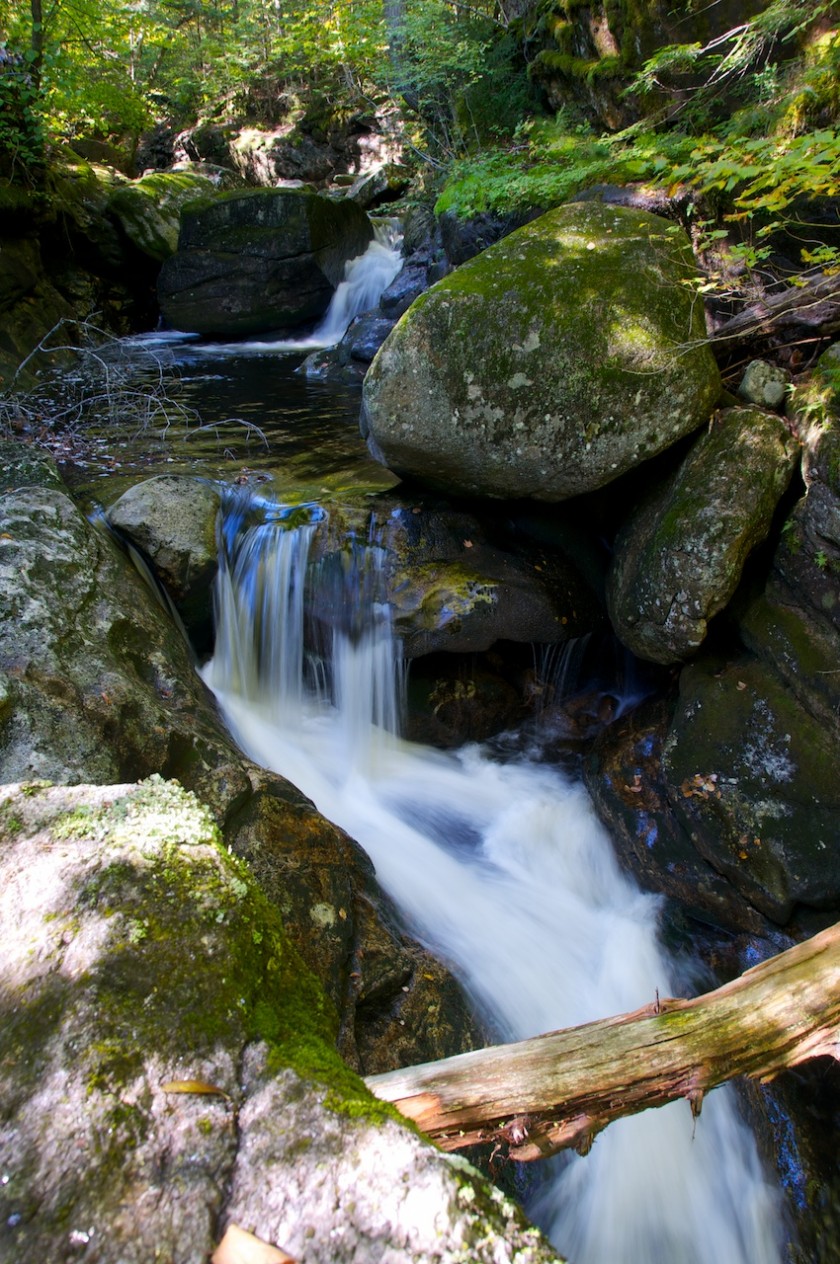 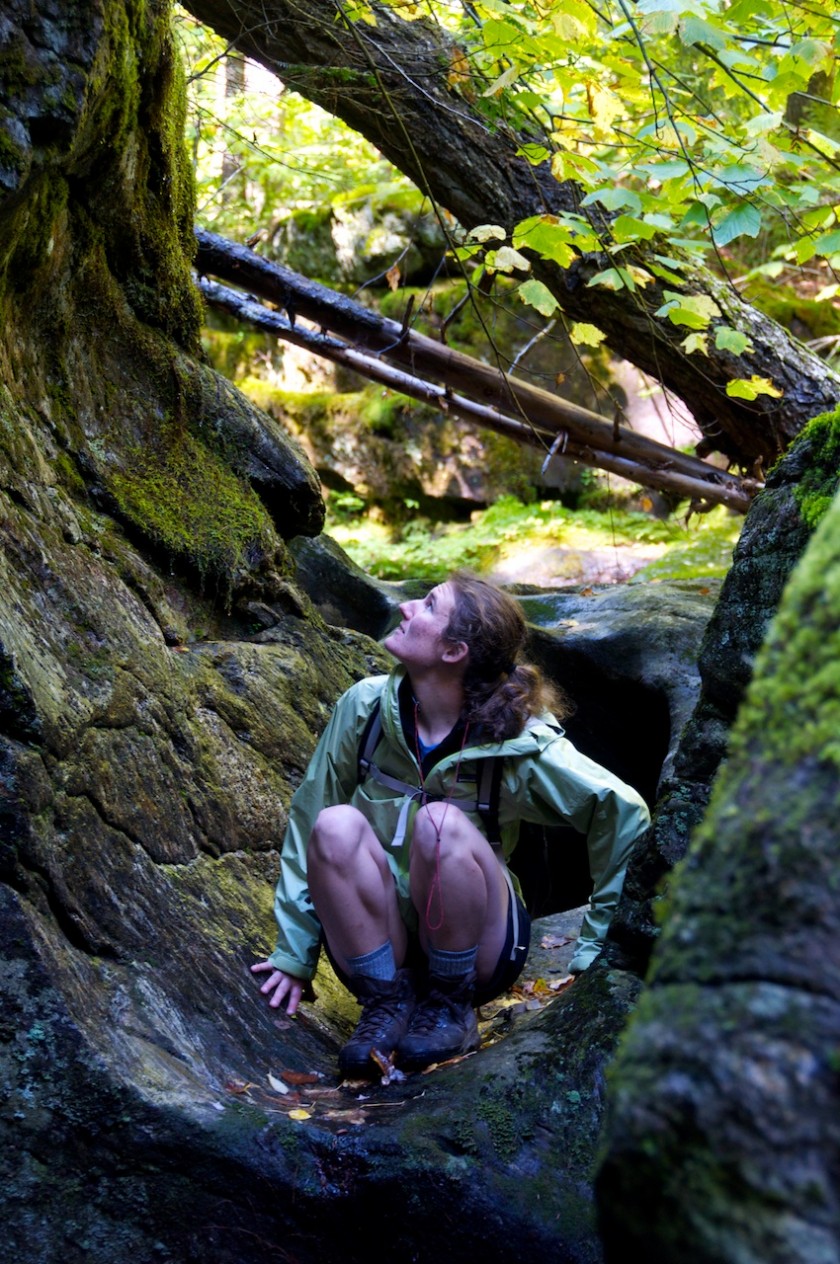 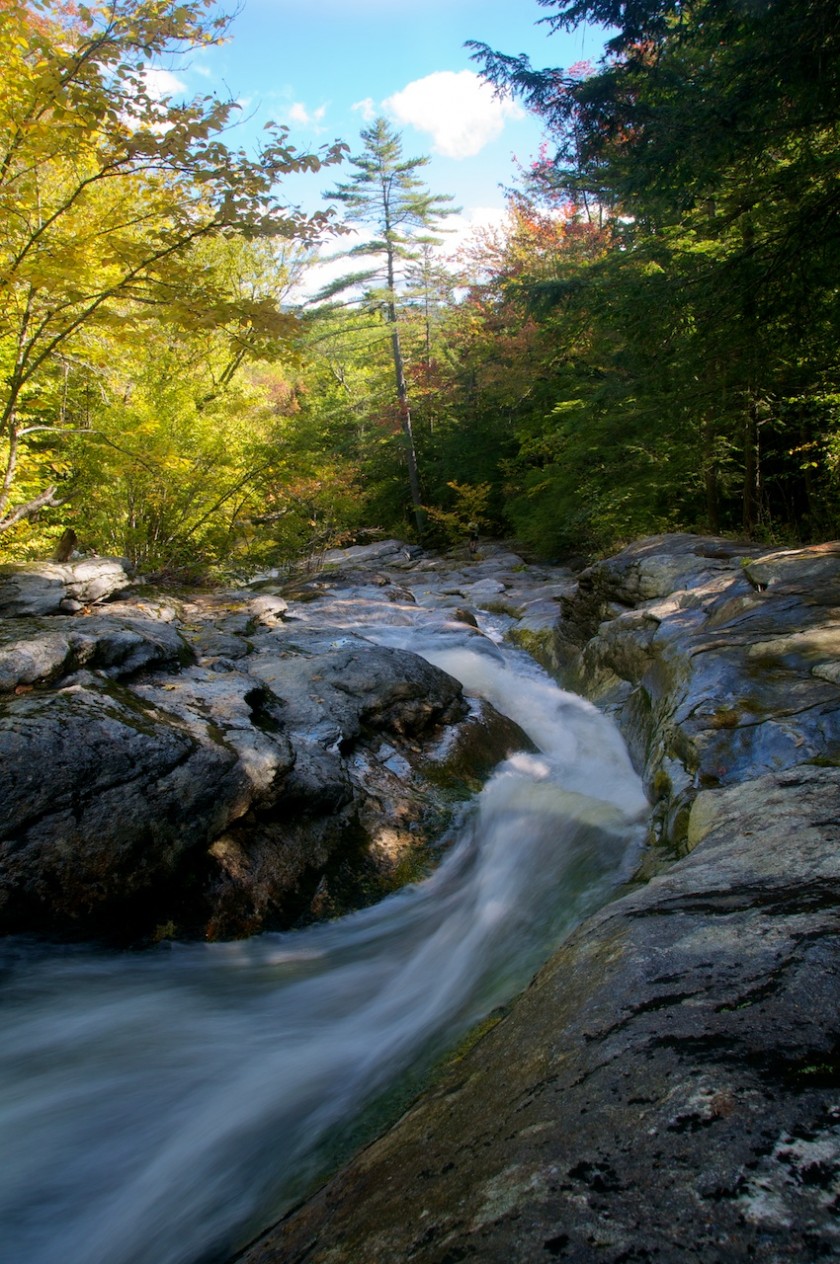