Recently I got the school's weather station online.

We are using a Davis Vantage Pro2. It is located at the top of Chadborne Hill, but the classroom is not, requiring two repeaters to make it down the hill. Then I have a computer running WeeWX to archive the data and push it to our FTP server every 5 min. This saves me from having to keep another internet facing machine patched which is awesome.

I started to add a bunch of basic resources, like the national forecast and the storm total snow images to the sidebar when I discovered that that National Weather service has a json endpoint for their forecast pages. I haven't found much documentation of the endpoint other than a StackOverflow Post.

Seeing that it was json, got me wondering if it might just be enough to embed the NWS graphical forecast into the website. Maybe a bit like this: 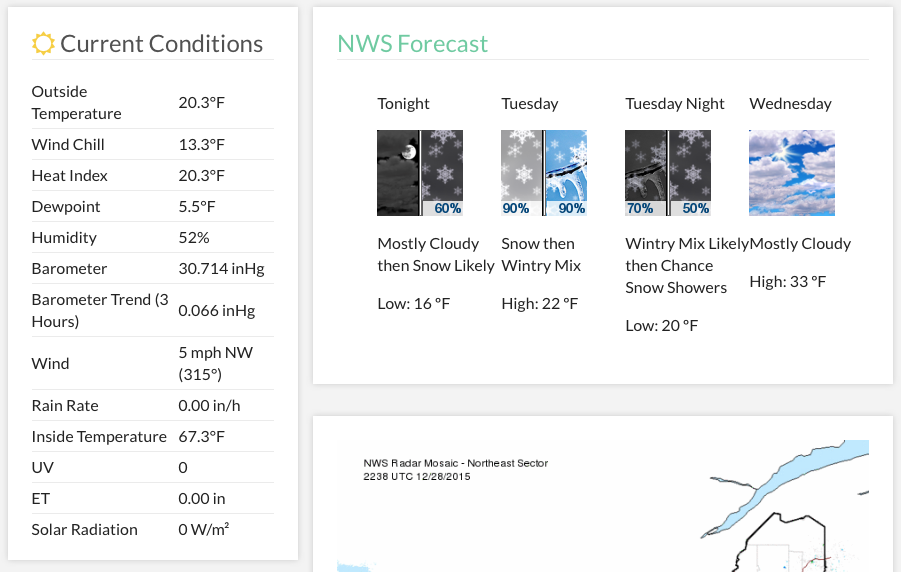 It turns out that the endpoint provides basically all the info you need to rebuild the core forecast page. So if you start with our North Bridgton Forecast and add `&FcstType_json onto the end you will get a nicely nicely structured JSON.

I've recently been trying to work on my JavaScript knowledge, so this seemed like a good time to try to put them to work. I knew that React was pretty lightweight and wouldn't require many changes to the existing code that WeeWX was already processing so I started building a set of React components for NWS JSON. Right now they are pretty basic and focused on that single graphical display.

This also made me try to understand the JavaScript build system. I'm going to be glad that I will only be needing to teach my students about Pip and Conda in a few weeks.

I was able to get a basic example running on my machine, and got it to the place where all someone needs is a div and a small script block with their lat-long to pull a forecast.

Now due to that troublesome thing called CORS and NWS's headers you can't just load it from another website directly, but if you pass &callback=nwsresponse the NWS servers will wrap it correctly in nwsresponse(json) as JSONP.

Thankfully I'm not the first to encounter this issue as jQuery.ajax supports callbacks natively, though the documentation is very sterile. It's probably pretty good for someone who is looking for specifics, but I was more looking for the tldr version of things. I had a few issues as jquery was actually trying to be too smart and append it's own callback after detecting that I was requesting a callback. Now it takes care of that, and all that is left is styling.

To make the forecast show up in a similar side scrolling container, you just need a bit of css in the right place (which caused a detour through SASS) as the theme I had started with was using it.

Now it isn't just an idea, but it's loaded client side!

I also found Iowa State's APIs while poking around for a CORS compatable NWS endpoint, but didn't explore them too much as I was looking for the normal forcast page information.

Also I rebuilt my site using Nikola which should become really useful with code-heavy posts that will probably happen more often with the Intro to Programming course that I am going to be teaching. I've got some more sprucing up to do with both the theme and the content, but this is a nice start.