Since I've made it back to Maine I have managed to paddle parts of 5 different rivers, 3 of which I haven't paddled before.

I've already thrown up some video from day 1 back of paddling the Cathance River.

Day 2, Daniel, Rigg and I were planning on paddling the Rapid River around 3200 cfs which would have been rather high compared to reports that I've heard for a first run for all three of us. Let it Rain says 2300 cfs is high and Ryan has paddled it to 3800 when it apparently was one big flush and you had to paddle around behind an island before you could get back up to Smooth Ledge.

Suffice to say if the Rapid was running that high on a non release day when it had only been running at 700 cfs the day before we could look around at other nearby rivers. 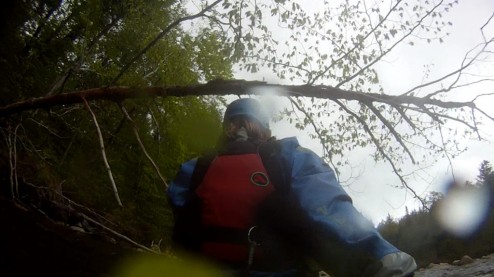 Hence we landed on the Wild River with 4 and change on the gauge. As AW recommends 4.5 feet which sounds about reasonable, it was a little scrapey on the way down, but that doesn't really dismay me. I would recommend trying to catch it at some sort of higher level if you want to play, as none of the playspots have come in yet.

As it was too late to think about heading to the Rapid and we wanted to do something more than paddle the Errol waves, I guided us in to Frenchmans Hole. I ran the drop twice while Daniel ran it 4 times as he wanted some pretty pictures to show everyone. Turns out that he got really lucky and this was pretty much my camera's last hurrah before getting sent into the Nikon Depot yesterday. 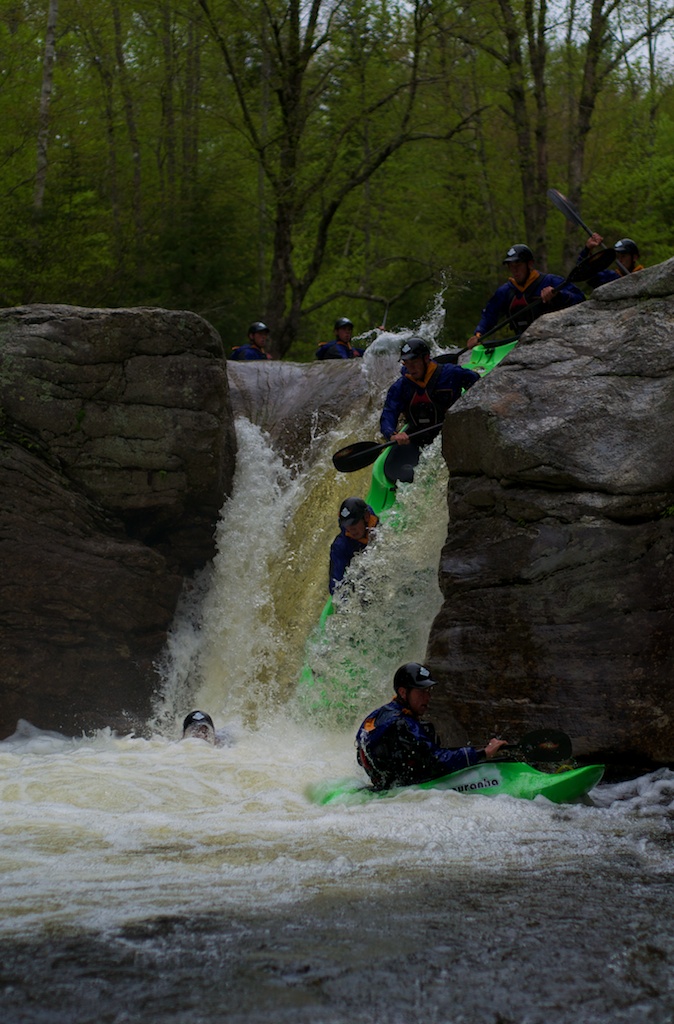 I did shoot some video from both sides of the drop, but I haven't gotten around to editing it yet.

4 days later Daniel and I had a nice mellow surf session at Sheepscot reversing falls where I attempted to get some more photos and video but ended up getting skunked.

The following day found Daniel and I getting up really early to drive to Bethel. My 9am call to the Maine H2Oline told us the level was around 2200 cfs. High but well within the range of normalcy.

We decided to drive directly to the takeout, throw both boats on one can and shuttle up to the put-in. That plan lasted until about mile 7 when we found the road from East B-Hill Road to the takeout washed out. Both of our vehicles had about 9 inches of clearance, but we didn't want to risk getting out the shovels to fix a 1.5 foot deep trench only to find another. Thankfully the road to the put-in and the road between the put-in and takeout were relatively clear, though we would have had to head all the way back out to East B-Hill Road if we didn't have a copy of the Delorme Maine Atlas and Gazetteer. Around noon we were hiking in, and started the mile and a half long paddle along Pond in the River and paddled through Lower Dam into the whitewater.

In between Lower Dam and Lake Umbagog is about 3 miles of whitewater. Usually when your on a river you average 1-2 miles per hour, we averaged 6. Smooth Ledge which was only surf-able if you really were looking for a workout as the water was moving to fast for playboats to stay on the slope of the wave, even if you were over in the pile on river left. Eddys were giant vague areas behind islands or in between trees. We found a couple of big holes, waves and even some small haystacks. Haystacks are what seems to be a vertically exploding column of water. They're not really holes or waves, just a foam pile that keeps going up with some force somewhere inside of it. The ones we found felt pretty big in our playboats, but are nowhere as big as you might find out somewhere like Idaho on the North Fork of the Payette during high water. 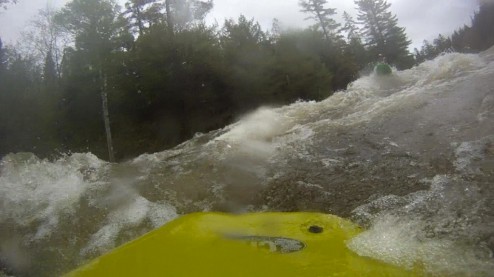 So we didn't quite believe that it was running at 2200 cfs. We took out in a cove where there were was some flagging flying along shore, and what looked like a trail. Turns out it might just have been some portage route back up river or something, because we ended up bushwhacking and dragging our boats up until we found a road. Eventually we hiked far enough along the road that we saw recent tire tracks, so we dropped our gear and continued wandering and searching for Daniel's truck. After a bit we found Daniel's truck, were able to pick the boats up, and run shuttle back to the put-in.

My car was low on gas so we decided to roll down the road to Errol, NH to fill up and check in with Saco Bound/Northern Waters to see what the level on the Magalloway River was as we could run shuttle very quickly there as it was roadside. That's where we got the news:

What did I write earlier:

8000 cfs in a river that is normally considered high at 2300 cfs is a lot of water. When you have a lot of water it tends to go many places that you don't want it to go. Thankfully all that water going down the Rapid didn't end up making any massive holes.

We next checked the levels for the Magalloway River, which was apparently running at 4800 cfs. Now normally Let It Rain considers 1200 cfs to be high, but we had already run the Rapid at 4x Let It Rain's recommendations, so we went and at least took a look.

Part way up the road one of the old guys around the Umbagog Wildlife Refuge told us that the generator was down that fed the Magalloway and they were dumping water as fast as possible as they were only allowed to do fixes with minimal water backed up behind Aziscohos Dam.

The Magalloway decided to make some pretty large holes. Nothing that would hold you until (my normal 'Long Time' phrases just had to get thrown out the window) Ontario Mounties allow you to drive faster than 90 kph (50 mph) but still not places that you wanted to be. Despite what seems like relatively clean lines through the holes it wasn't a place that I wanted to be putting on in a playboat at 6 pm.

Because Daniel and I were already rather close to Canada (the reason I have a Passport Card in my wallet until the TSA decides to freak out that Maine isn't abiding by the RealID act for their drivers licenses), we drove through Rangley on our way back down to Route 2. I didn't tell Daniel how close we were to Quebec before I told him where we were going there.

Somewhere along Mooselookmeguntic Lake we came across a couple of moose and what seemed like a cloud. It wasn't regular fog that caused us to knock 20 mph off the speed limit, but it definitely felt like it was raining somewhere below us and we were just wrapped up in a cloud.

We took a quick look at the Swift River as we drove past. We didn't stop and scout as I've been skunked trying to paddle the Swift in the past, and I think it runs even less than the Wild does. Anyways in Mexico Daniel headed back for Boothbay while I headed to party with some of the Gould faculty at the Mill Hill Inn where my old ski patrol instructor/musical director (I was on tech crew) was playing.

After Doug had played three sets and midnight decided to grace the clock, Woody (the owner of the Mill Hill Inn and a buddy) reminded us there were people upstairs. That left me faced with the decision of should I head back to Boothbay, should I head down to another friend's birthday party in Portland, or should I crash at Frenchmans Hole for the night. I ended up meandering my way down to Boothbay, and after increasing my critter count to two moose, two deer, and a skunk, and a nap at the Wiscassett Community Center I made it home around 3:30 only to have to get ready for a friend and his girlfriend to show up that day.

Sorry  kids for putting so many words on a page that deserved more pictures or video. I do have video from the Wild, Rapid and Frenchmans, but I haven't done any editing other than to extract a couple of stills from the GoPro.

GoPro geeks - any suggestions for getting a mount to stick reliably to kayak plastic? I have a mount just behind my cockpit rim that seems to stay put, but when I tried to put one on the stern it decided that wasn't the place to be, I'm thinking the best option might be to tear off the 3m pad and just use some Epoxy glue (looking at thisTothat)