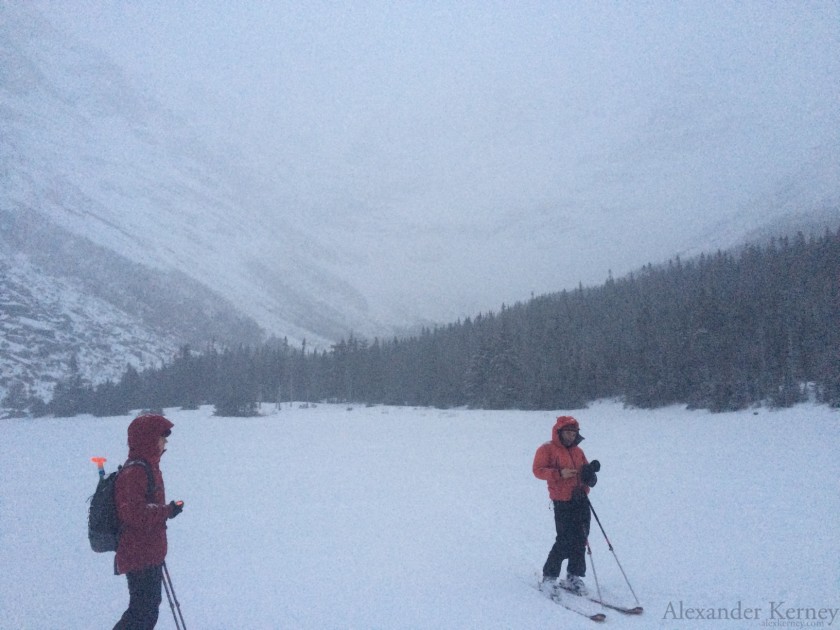 I thought that it might be about time I took Avalanche II, now that it was about 10 years ago that I took Avalanche I, having spent some time in Colorado, and so forth. Acadia Mountain Guides runs a course in conjunction with Baxter State park. This year they had to add an extra course, that I managed to get on. Now as the course is run out of Chimney Pond. Now as the park is pretty restrictive about travel during the winter it made for quite the approach. Stage 1 (by Car) - Bridgton to Old Town on Thursday. Thank you Anthony and friends for letting me crash on your Futon, as Bridgton to Millinocket by 8 am would have probably left me useless the rest of the day. 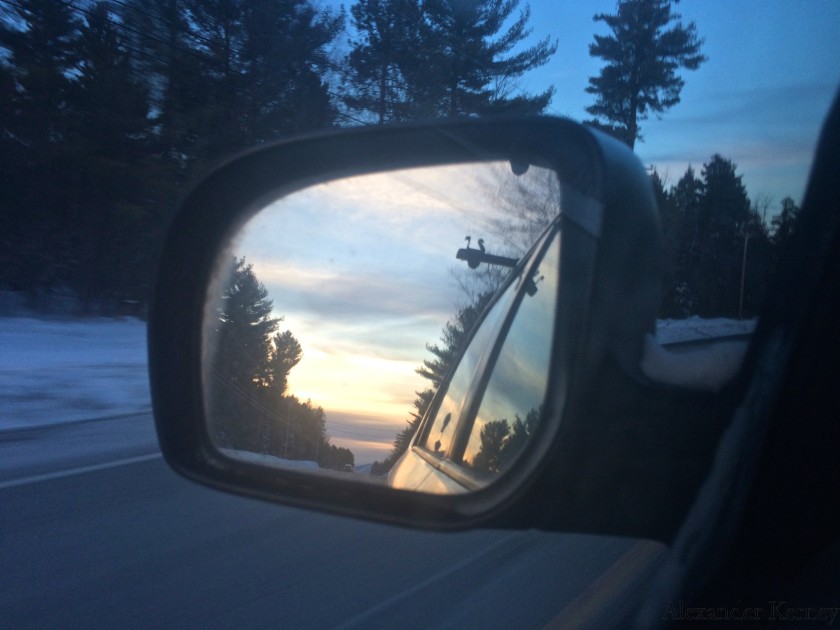 Stage 2 (also by car) - Old Town to Millinocket and Abol Bridge on Friday. I rallied early out of Old Town as it started to snow Friday morning to meet the course instructor Jon Tierney at park headquarters, before collecting two more people at the Big Moose Inn and heading out to Abol Bridge. 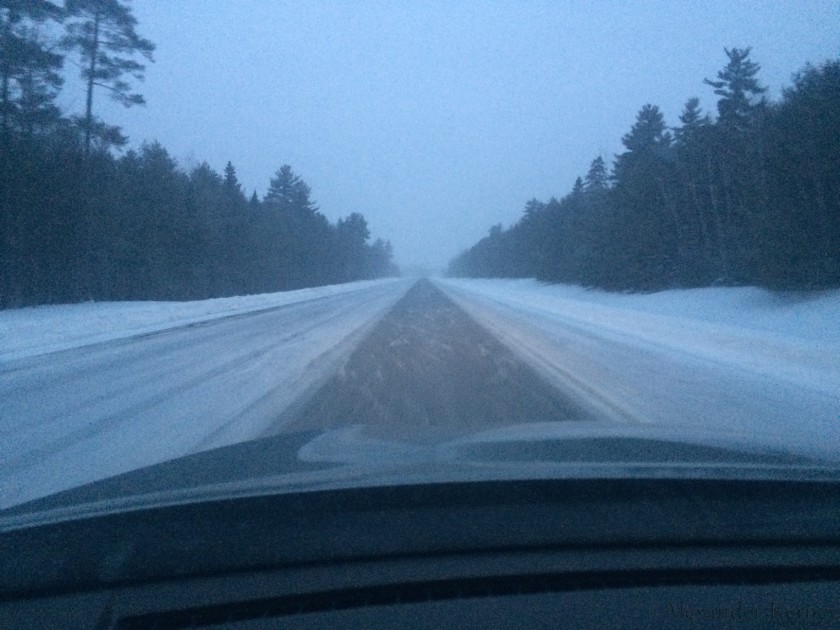 Now for those of you who have been to the park during the summer, you might be saying 'You kooks! Abel Bridge ain't on the way to Chimney Pond!', and during the summer you would be right. During the winter however all the park roads are closed and unplowed, so as the course is in association with the park they give us a snowmobile ride in. Stage 3 (sled) - Abol Bridge to Roaring Brook. 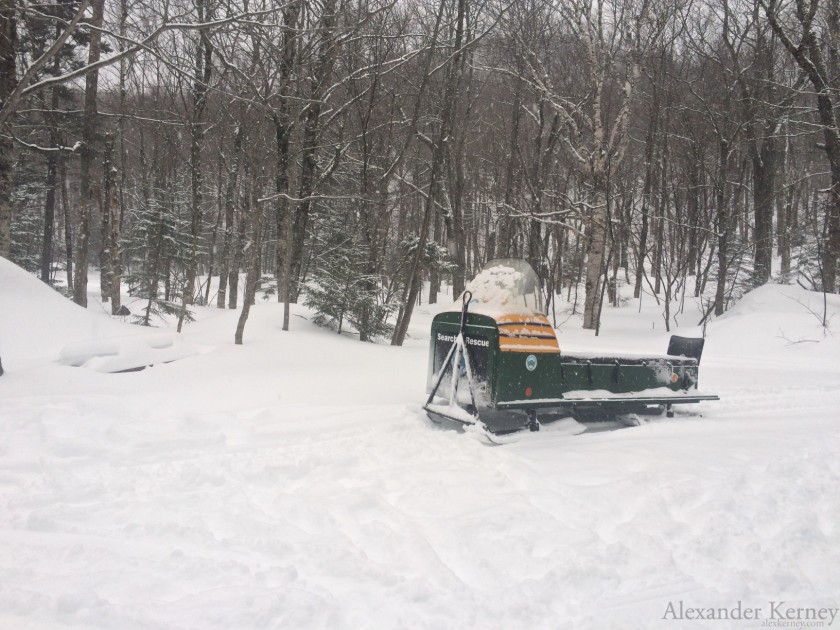 It's a long way around from Abol to Roaring Brook during the summer, and it's a pretty long way during the winter, but the park gave us a tow in, allowing us to avoid 13.5 miles of slogging. I don't think we could have fit the course into 4 days if we had to make the hike in and out. Also it would be a good reason to invest in moleskin companies. Stage 4 (Skinning) - Roaring Brook to Chimney Pond. As the trail to Chimney Pond was still in early season conditions, we were left to our own devices to make it up. 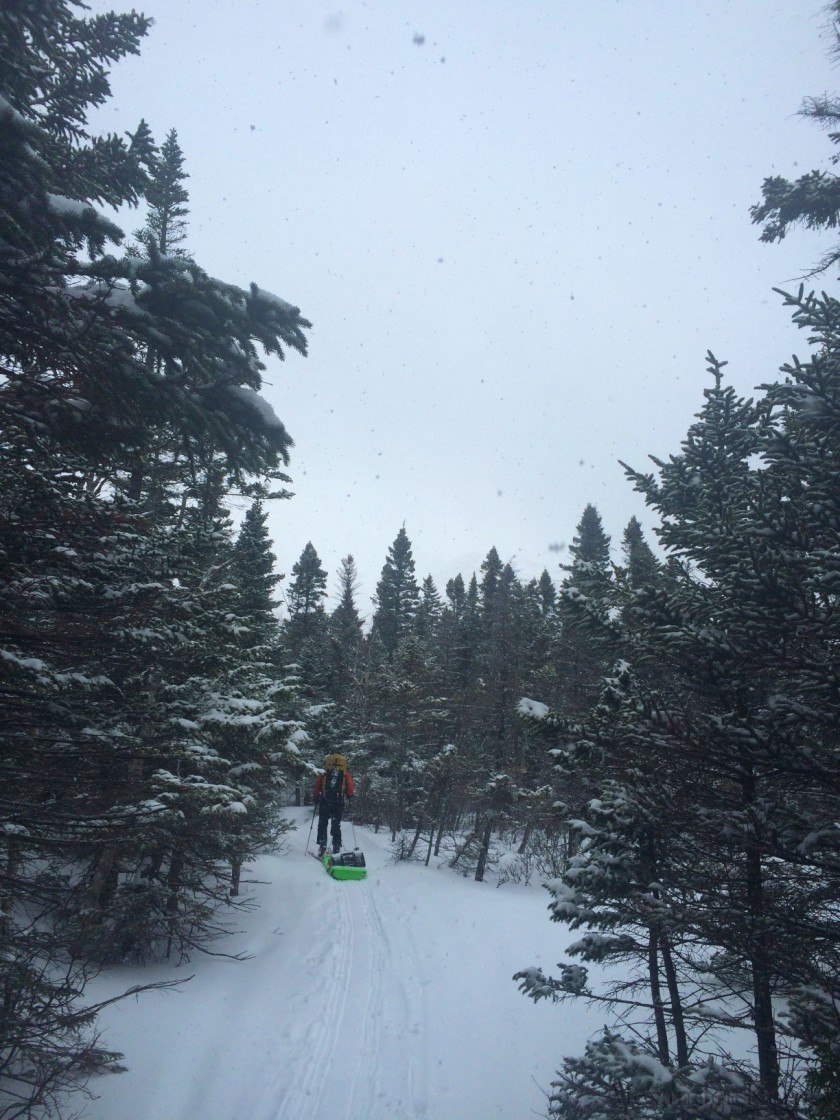 So up we went for 3 miles in the snow. Our first real view of the mountain came as we dropped out onto the Basin Ponds, but it was still somewhat shrouded by low clouds and snow. 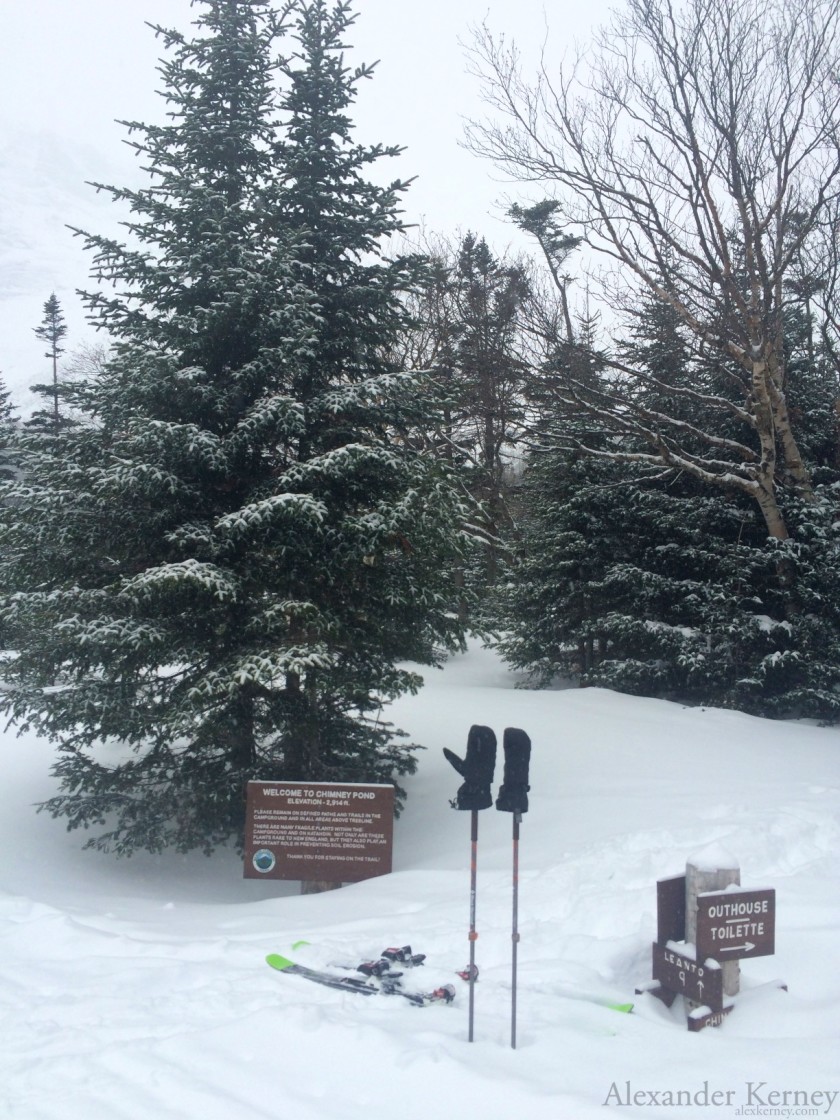 We made it to Chimney Pond , where we had a little time to settle in and grab some lunch and meet the 4th member of our course, one of the winter rangers, before heading back outside for some beacon practice by the pond.

First we checked that our beacons were actually working, before we buried some of the spares for practice. Considering most of the hiding spots amongst the trees, I believe trauma would be the chief concern of any of the packs rescued. 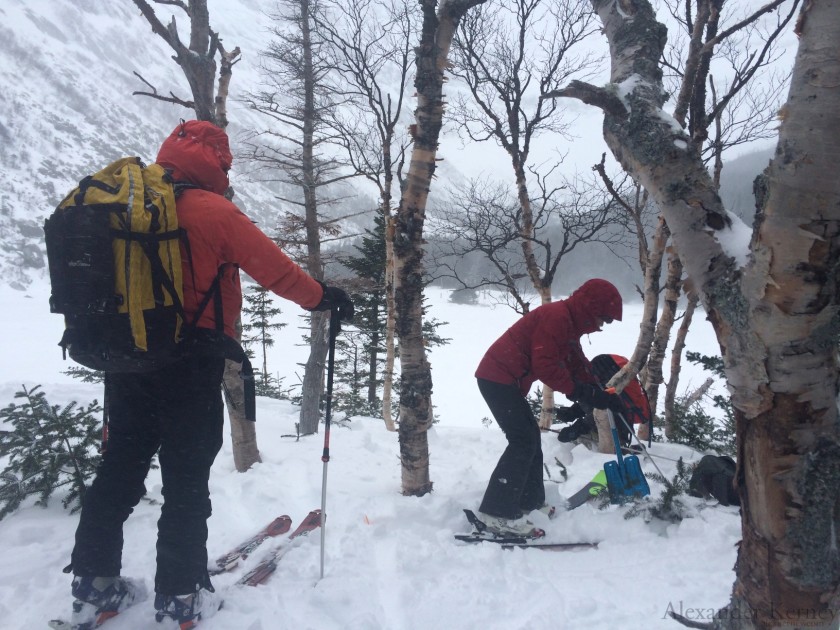 Then we found out why Jon dragged up a toolbox on a sled...it contained the projector and computer for Powerpoint.

It was hard not to get distracted with the view. 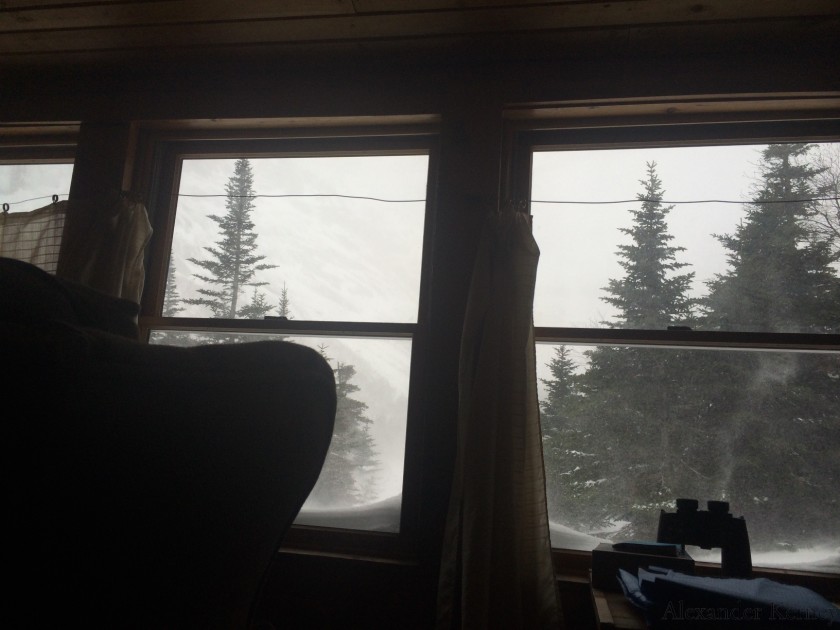 The next day while doing some more searches and working on a group snow profile around Chimney Pond we witnessed a loose dry slide out of Pamola's Fury. 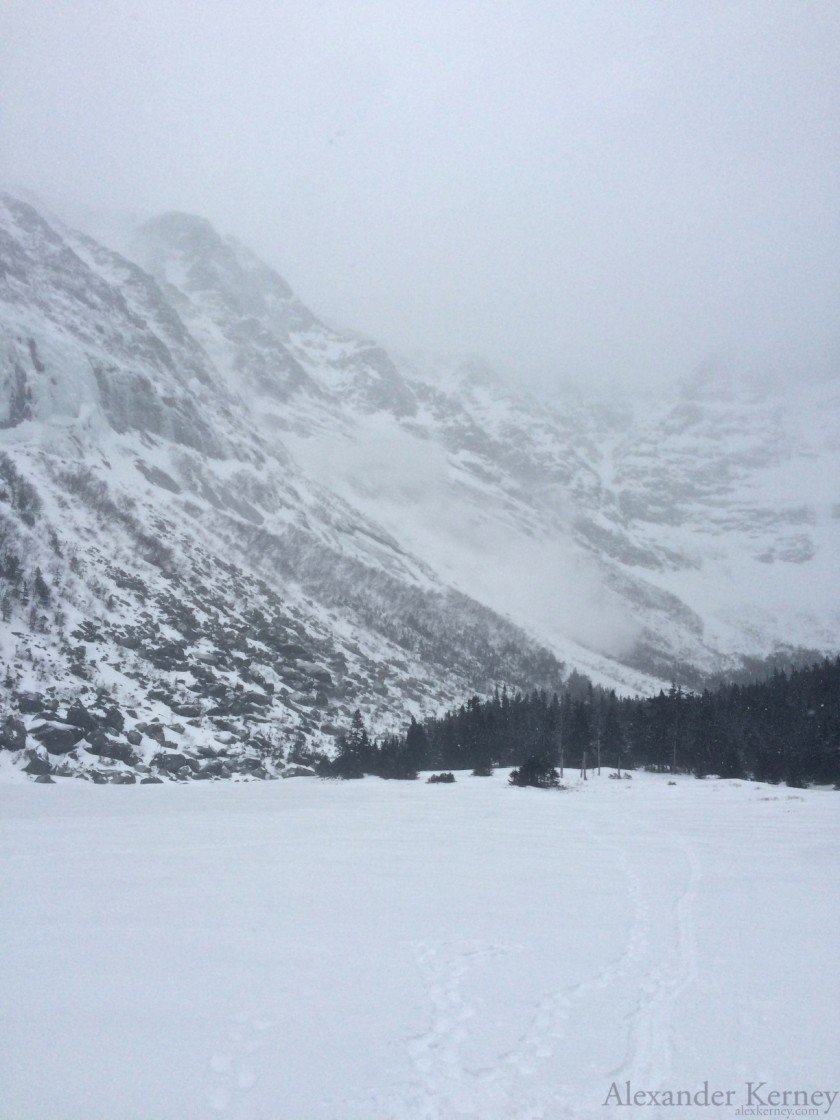 Then as a powder cloud doesn't leave much for interesting debris we went back to our group profile. 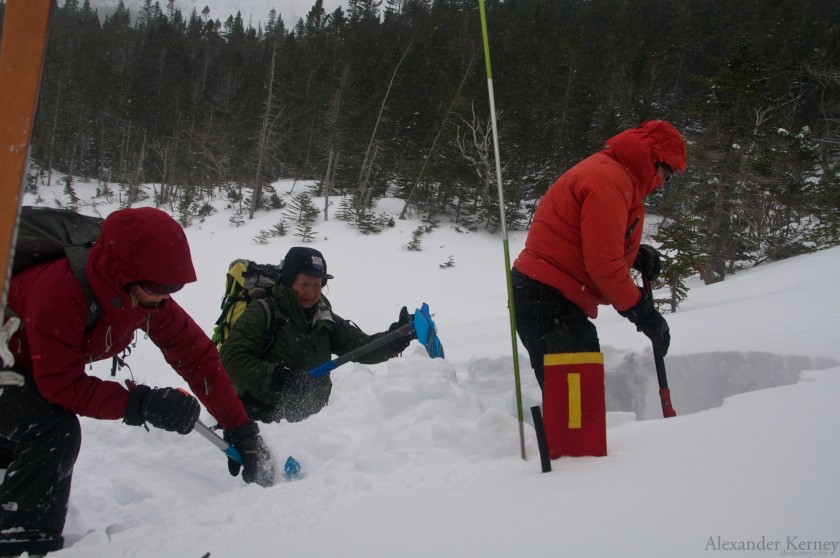 After chugging through one profile as a group we were left to work on our own with the added challenge of it getting dark. 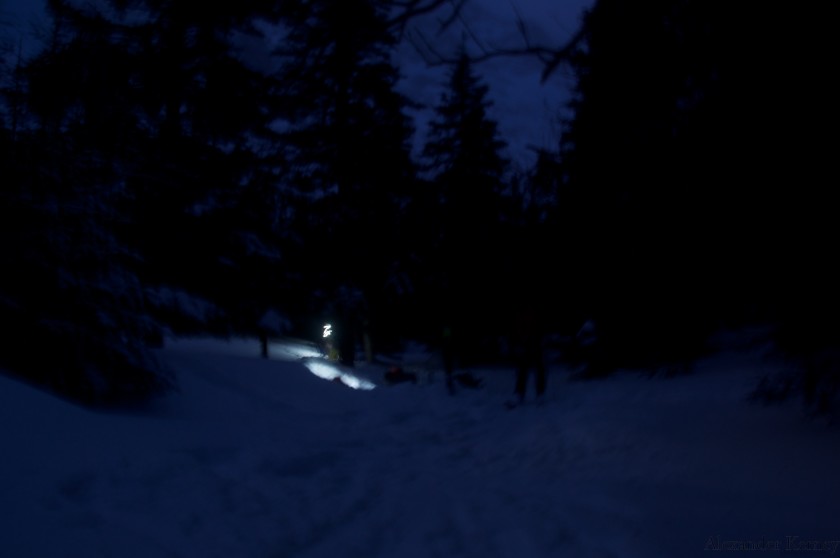 As it got dark it also cleared out for a bit of a view. 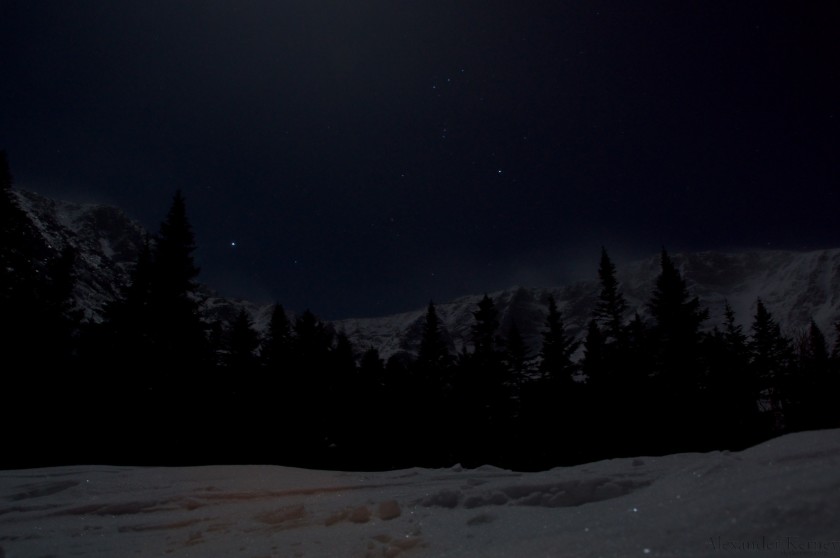 The next day we decided to head around towards the Saddle to dig a few profiles, and hopefully get a few turns in. Probably the best indicator of the fact it was pretty cold is that I usually only wear a light shirt while skinning. Instead I had on two shirts, a soft shell, and a hard shell, and I was still getting a bit cold breaking trail. I had a few whoomphs and cracks from the windslab, but it arrested well and was pretty patchy. The moment we turned around and tried to dig a pit at treeline it got pretty brutal, and photos were not on my mind. Eventually we retreated a bit down the trail and into the trees where we were all able to process a bit better and practice a few tests. 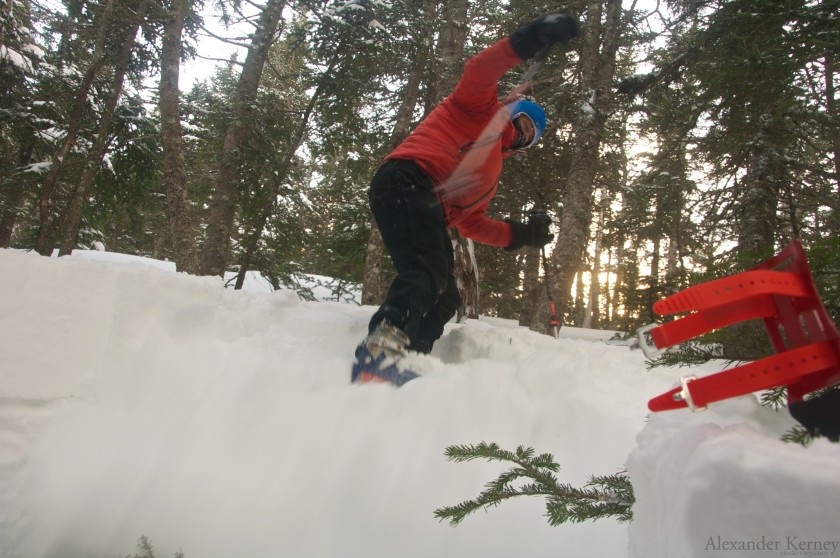 Away it goes! I stayed back with the ranger and we did a full but quick profile after our tests. We didn't actually write any of the test results down as we were still warming back up. 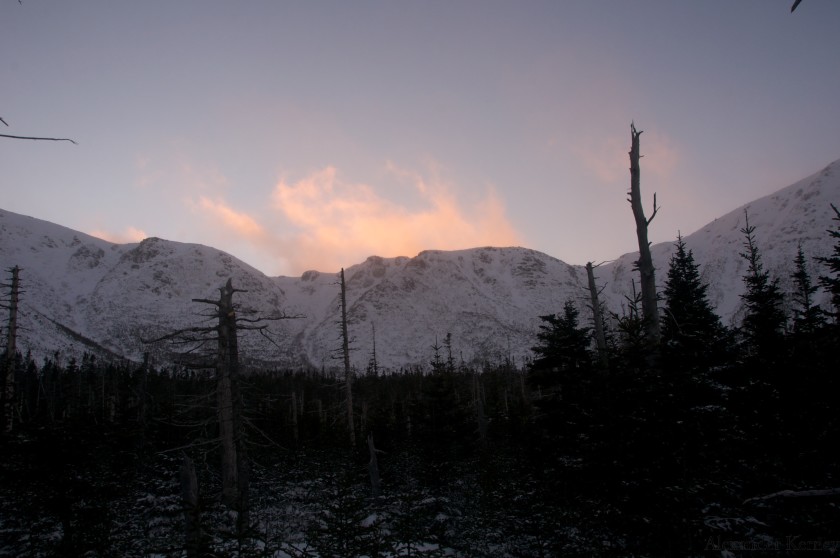 Sunset caught us on our way down. We also found out you can see the signpost at the top of the Saddle on our way down, which caused a minor panic (as we really weren't in great shape to go up and grab them at that point) as we thought there was someone still up there until I busted out the zoom. 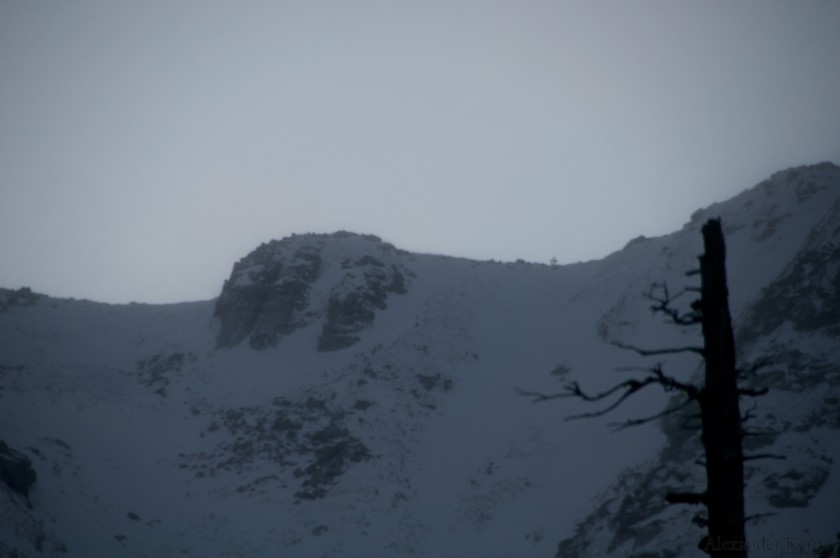 We had another nice clear night. 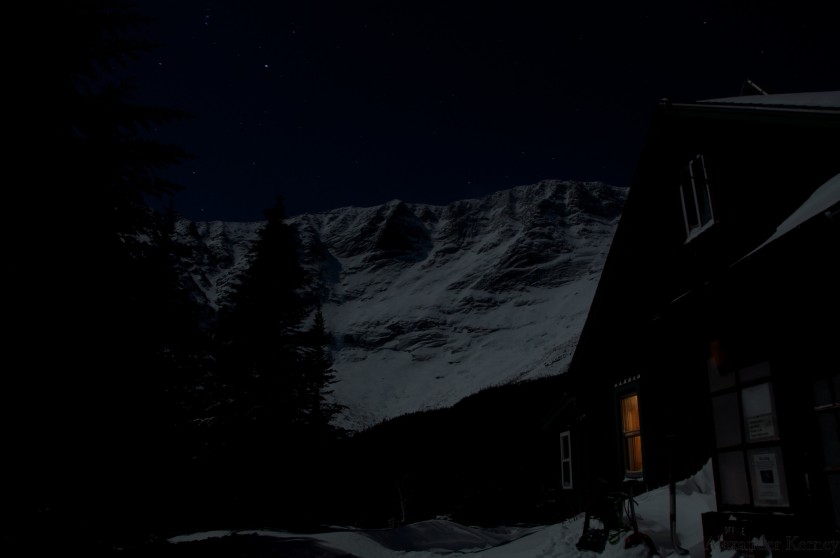 On our last day we headed up below the first Cathedral to dig some pits and do some tests in the windslab that we had been worried about. 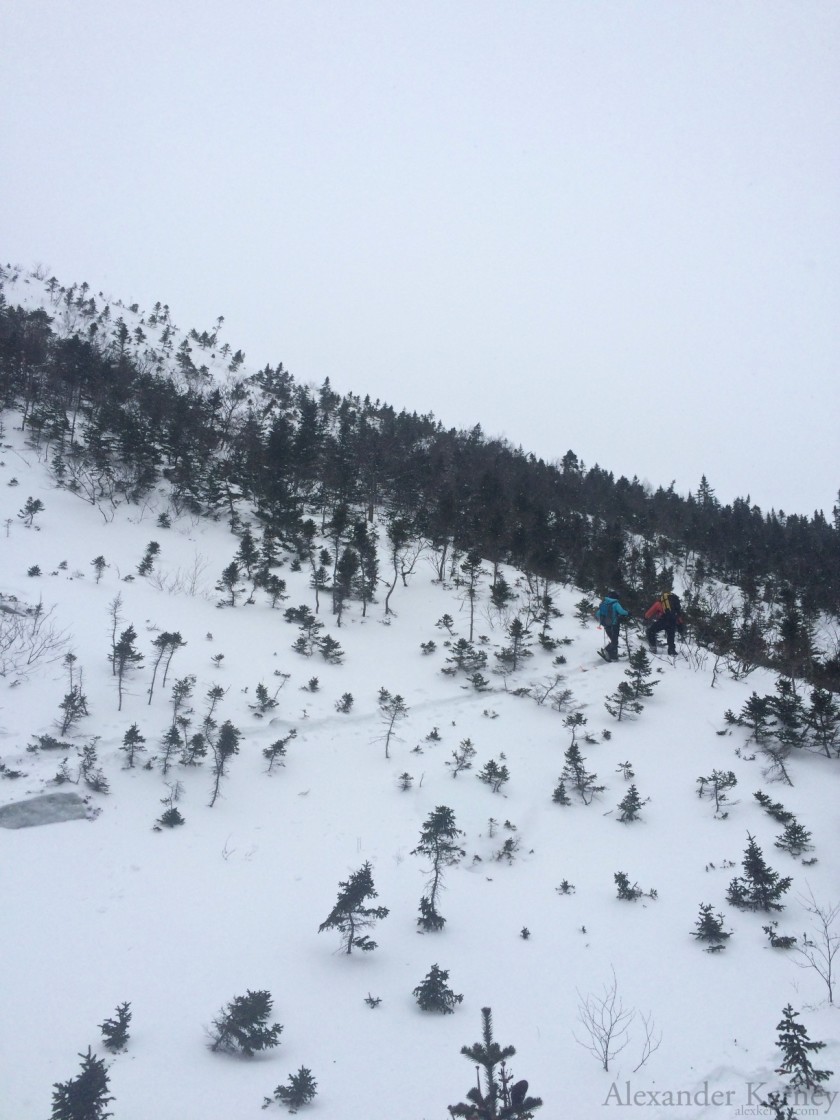 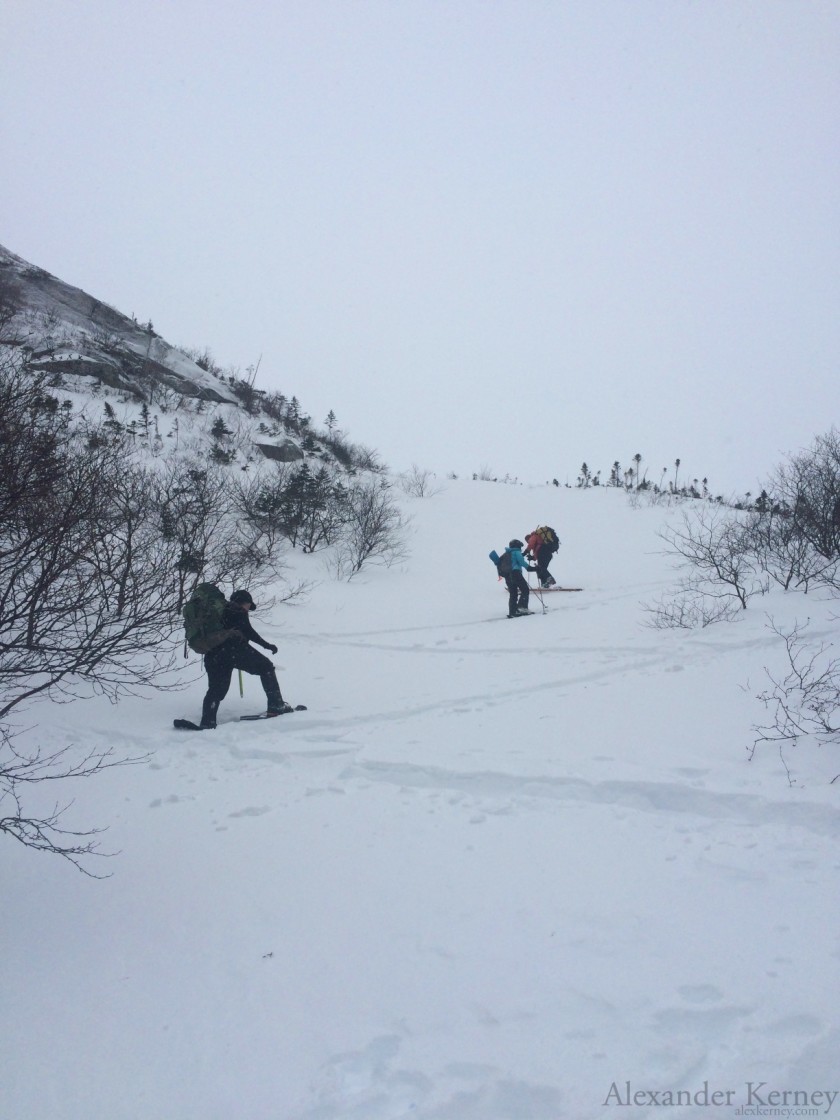 Both the ranger and I had nearly two meter pits, while on the other side of the path they were much shallower. 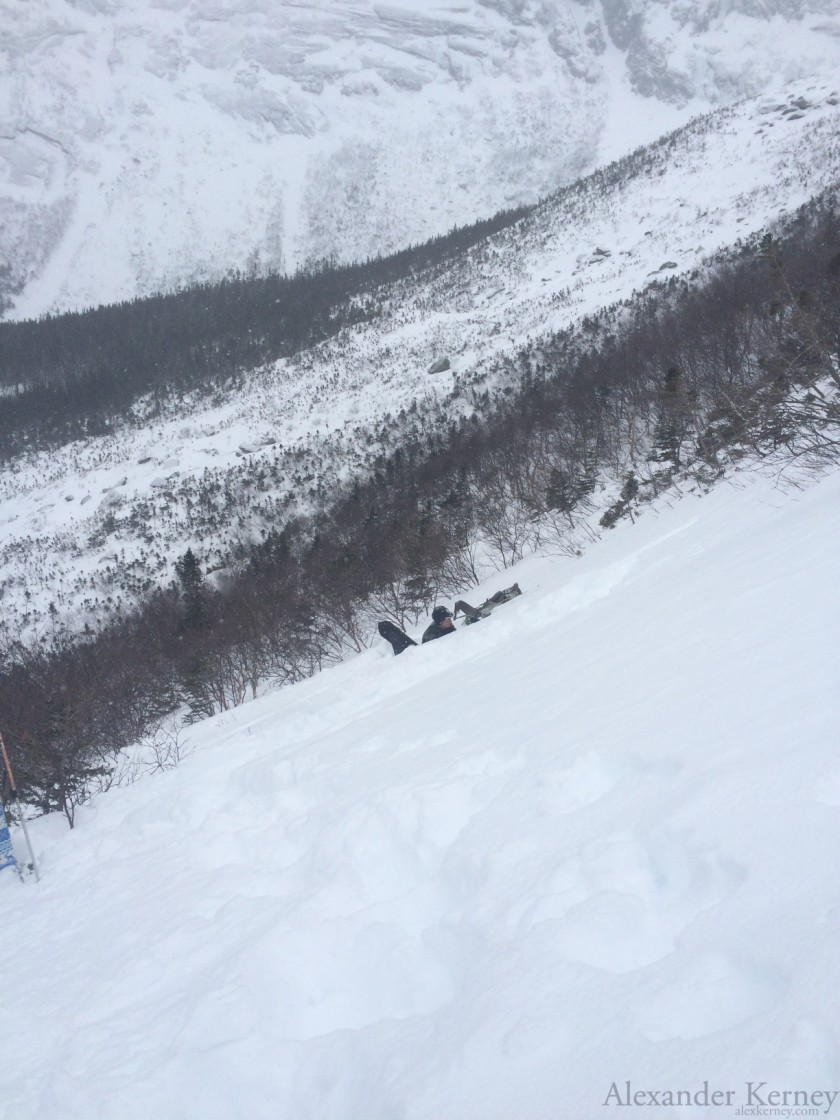 It did feel like watching Whack-A-Mole as we came in and out of our holes. 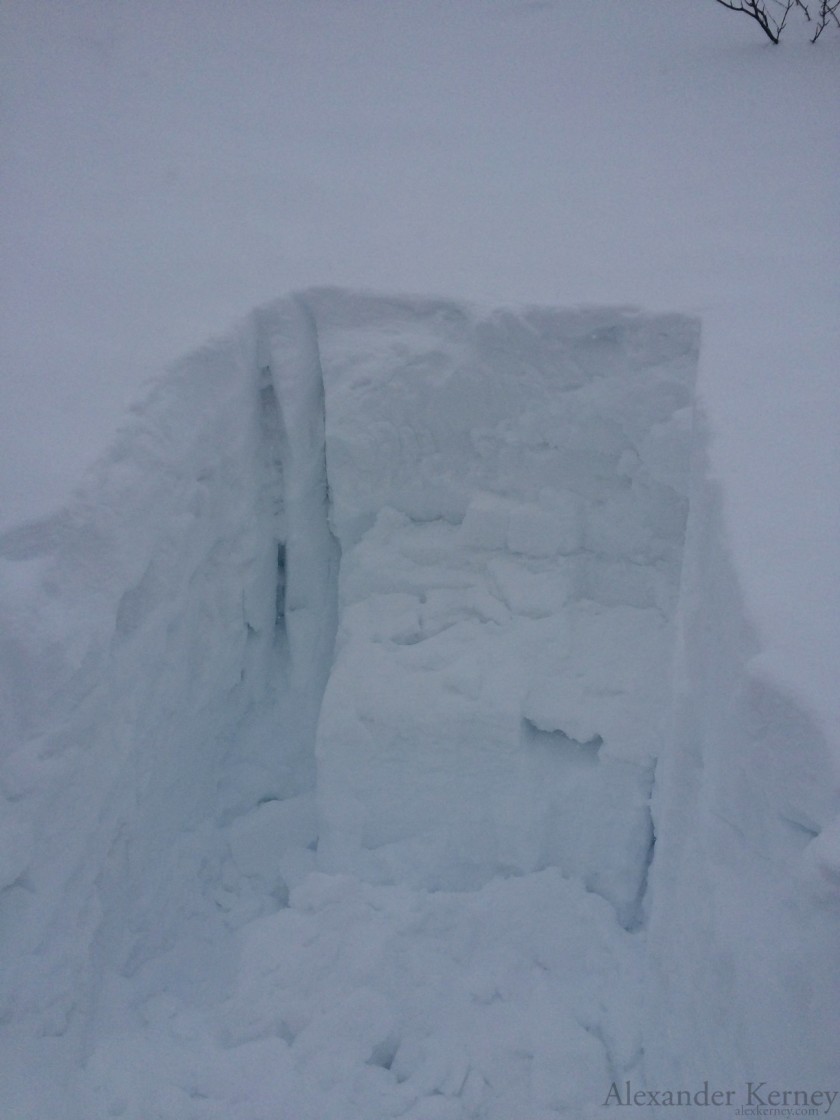 Tie prevented us from doing all the test that we wished in our pits, especially with their depth, but things were holding together pretty well. So we made a few turns. 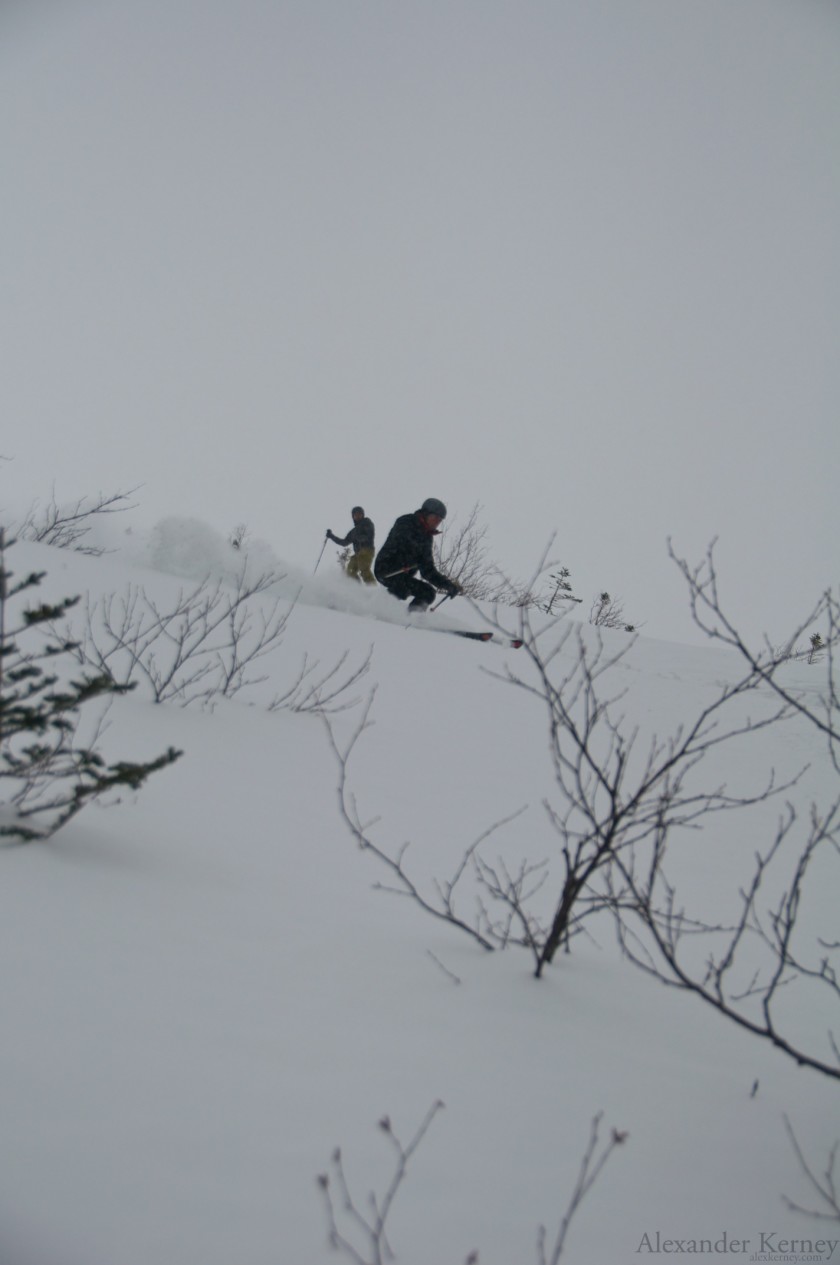 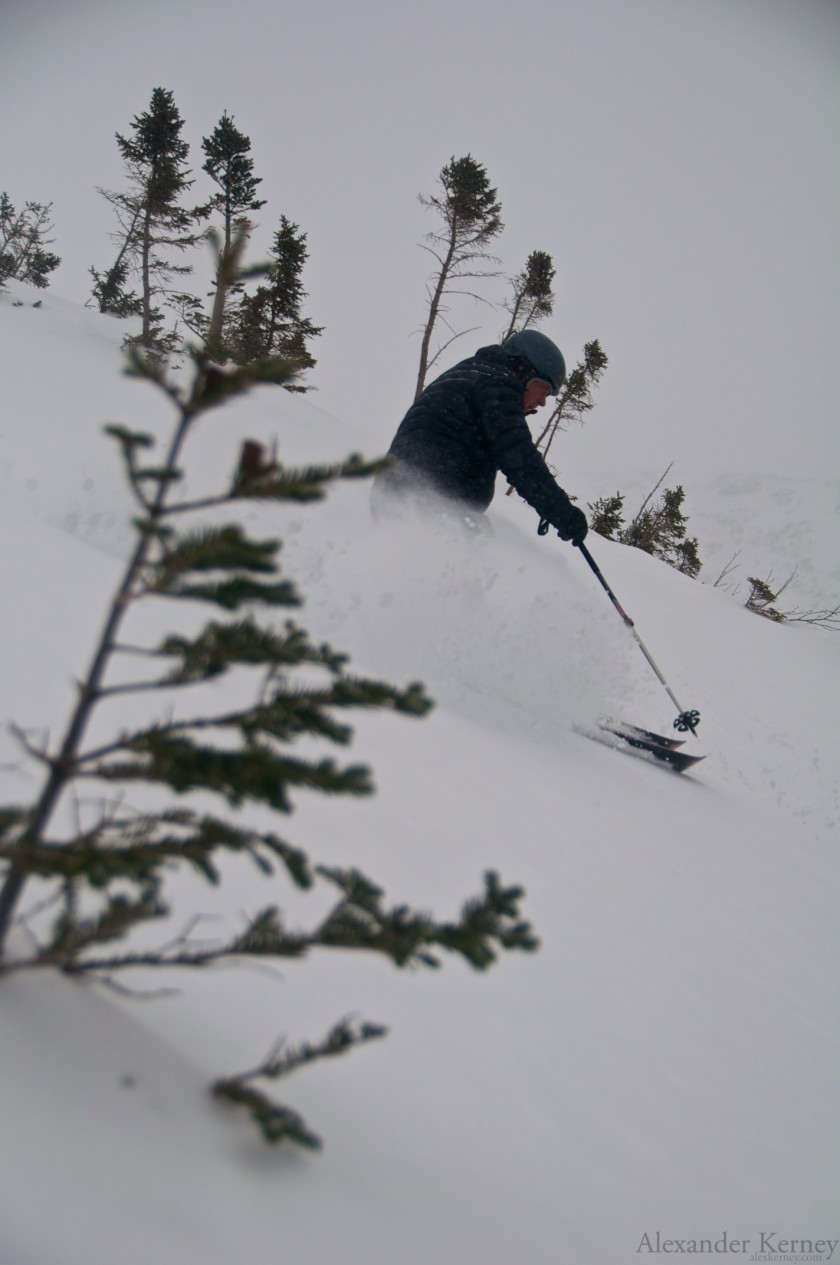 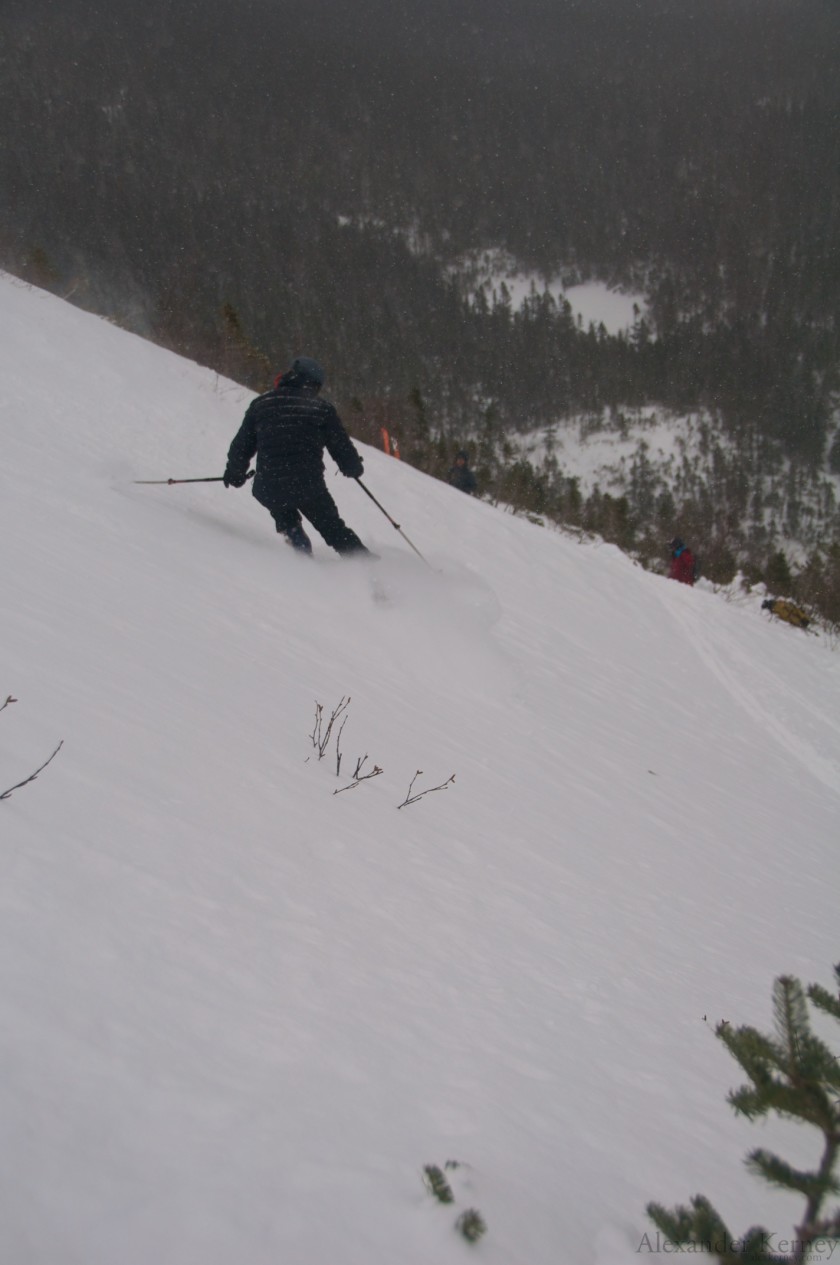 It was a bit variable from very soft to windslab. 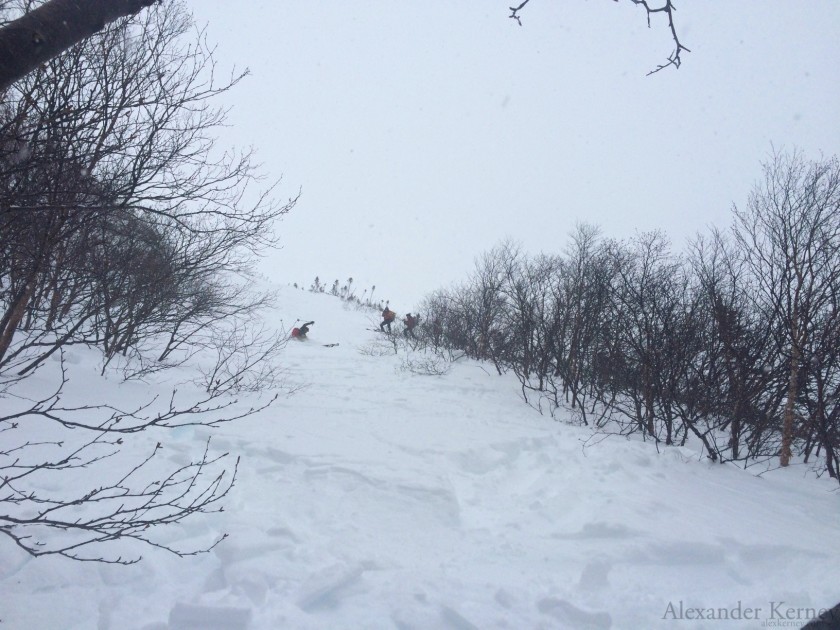 Before long we had to pick our way out. 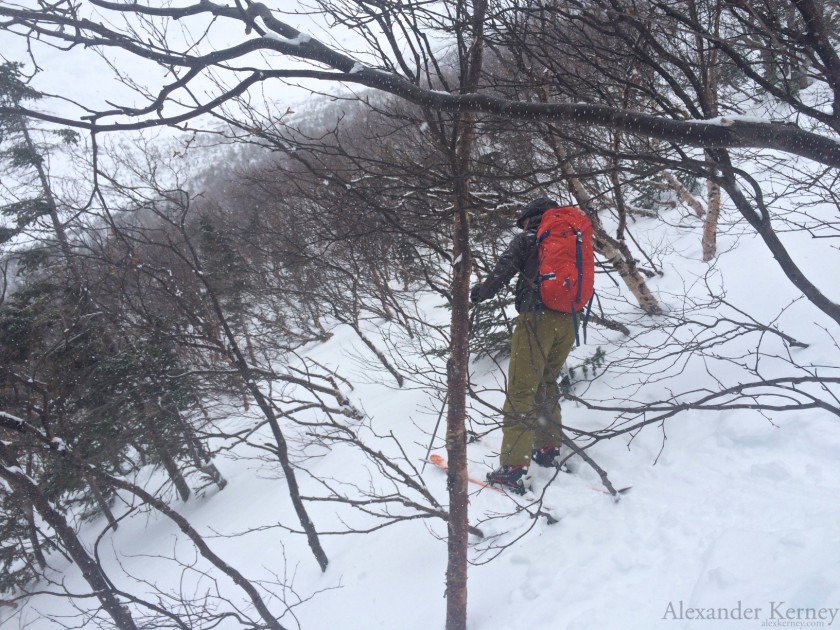 If Black Diamond was an East Coast company, they would have a lot more shots like that in their propaganda. 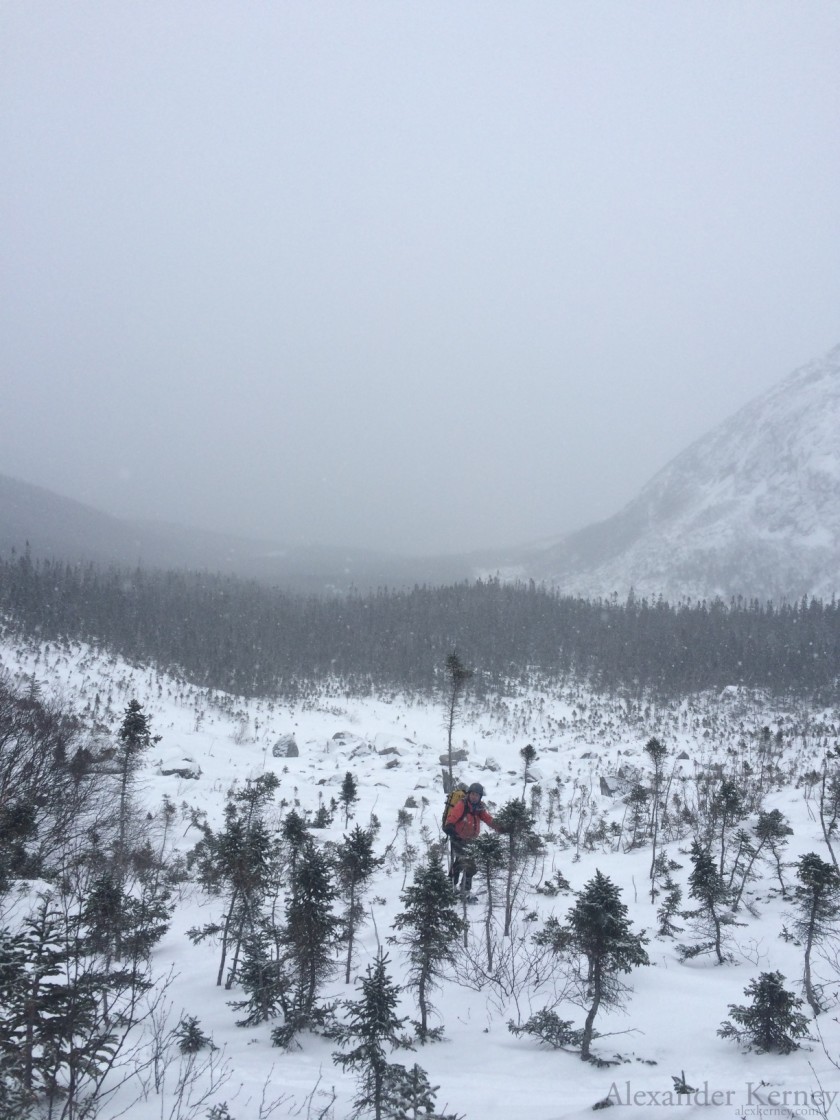 More picking our way down. 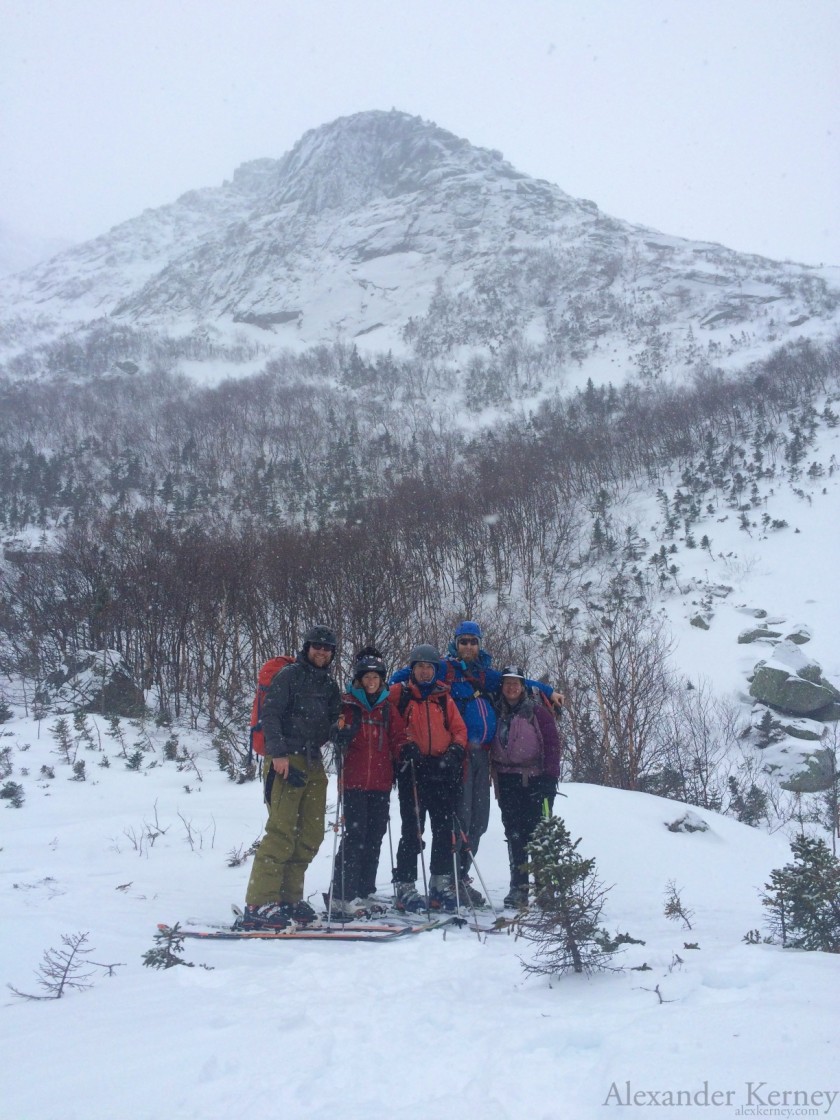 Another ranger had come up for coverage for the day, but he wandered up to see what kind of a commotion we were causing and got a group photo of us before we had to disperse for the day. Between the two storms during our course, and the storm earlier in the week, the trail had made it to good winter conditions, so the rangers took some of our stuff out for us, giving us a fun three mile ski down to Roaring Brook.

At Roaring Brook we loaded back up on the SAR Sled (about an hour later than we intended) and got a ride out of the park as night fell. 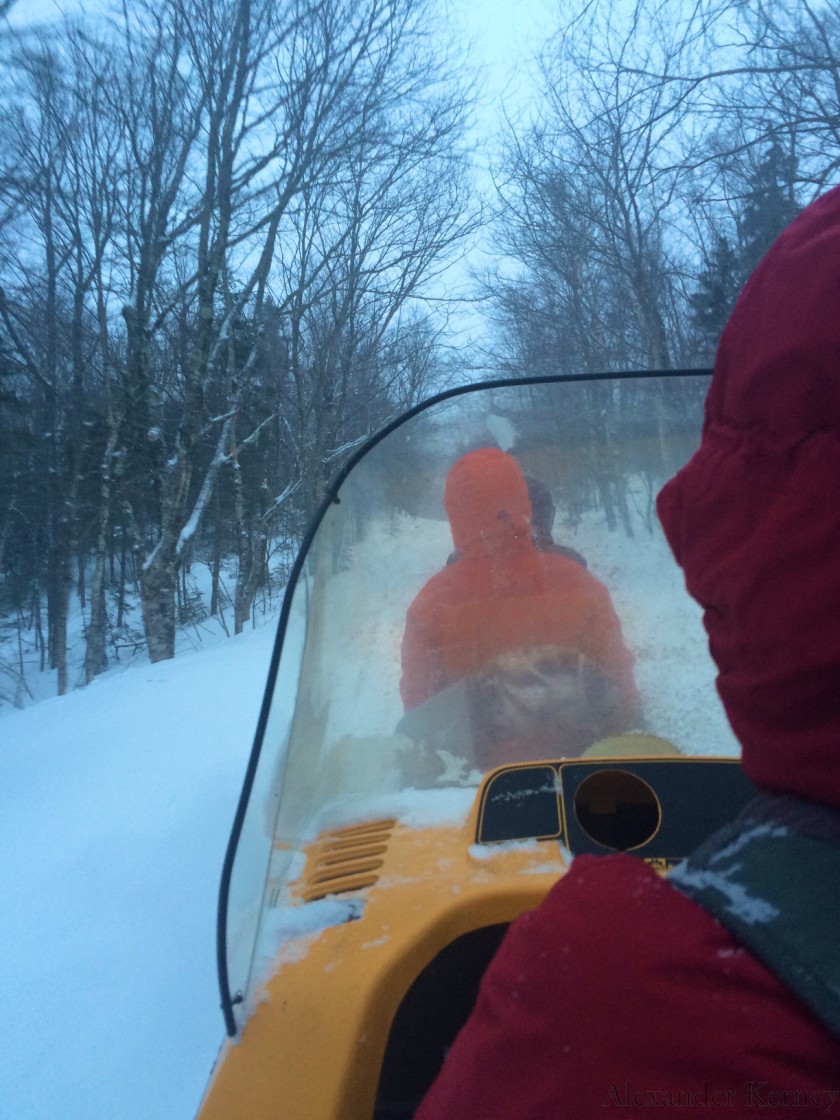 We exited the park to find that our little 3-5 inch storm was hammering the coast. 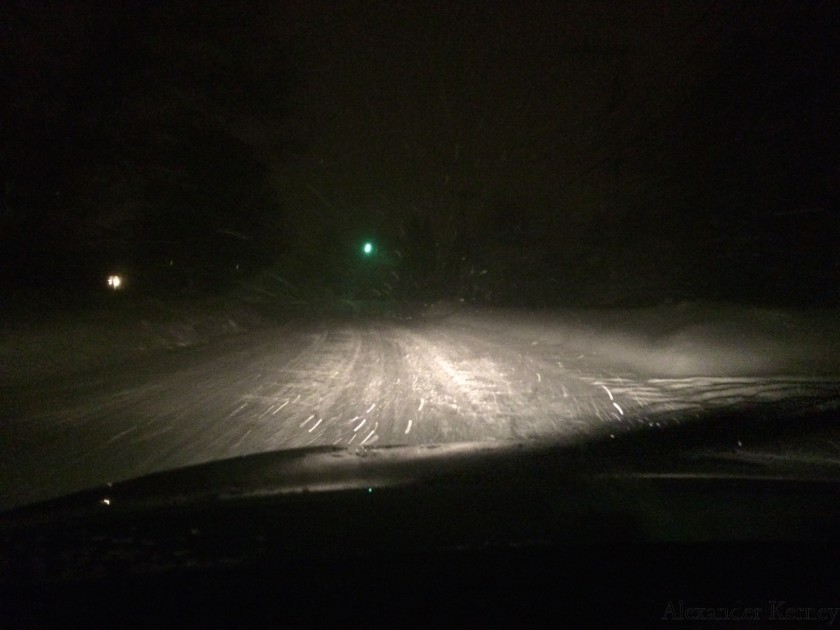 It wasn't too bad on the Golden Road back to Millinocket, but from Medway to Old Town was a mess. My plan of heading back to Bridgton got very canceled by some of the worse highway conditions I've encountered. Anthony let me crash on his couch again, and the next day cleared up nicely. Thanks again to Jon Tierney, Acadia Mountain Guides and Baxter State Park for running the course, and Scott, Holly and Jen for putting up with me hacking away post-cold.