Over the weekend of the 18th I had an early Christmas/birthday with my family, and then I headed out of Boston on the 20th after almost everyone tried to help me pack. Just as I reached the airport it started to snow lightly. 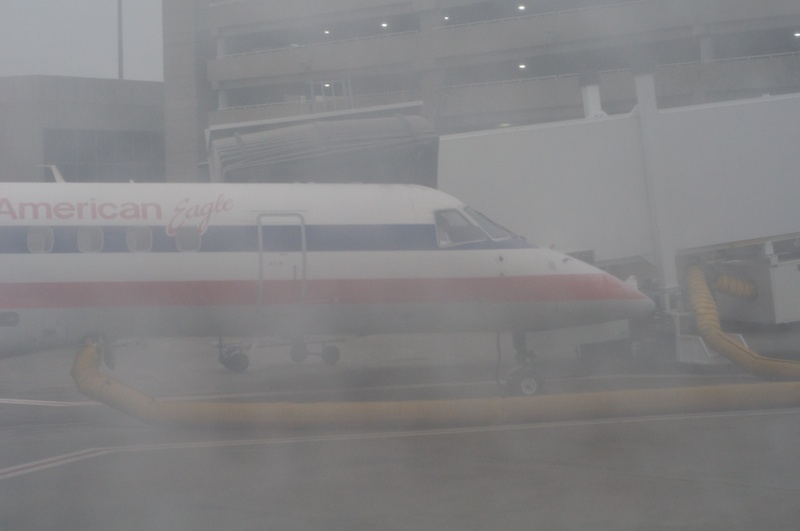 I made it to JFK and had to wander around the airport, eventually traveling to a terminal on the opposite side, but thankfully all my bags followed me without my intervention. LAN didn't even have their desk setup, so there was a blob of other people waiting. Someone else did meet my fear of having to travel from JFK to LGA but I thankfully did not have any similar problems. I ended up hanging out at a pub with a lot of happy and slightly drunk Air Lingus passengers that were very interested in what I was doing although they were not quite interested enough to buy me a drink.

After the usual experience of boarding a plane with 7 seats across compounded by the gate announcements being in more Spanish than English (didn't understand what row numbers they were calling out), we pushed back to have a good view of one of the larger planes on the planet.

The Airbus A380 in Emirates regalia was window dressing as we sat for a while on the tarmac. Eventually we took off for Santiago which is one of the few routes on the planet that you can measure on a flat map (if normally projected) without having to do any great circle calculations. After watching Inception on the seatback monitor, and then crashing my monitor as I tried to see what else was offered, I drifted off to sleep.

I arrived in Santiago to a slightly tight connection due to bags being unloaded on two different carousels, but thankfully someone noticed that I was heading to Punta Arenas and had a better grasp of the time and helped quickly clear my bags through customs and then getting rechecked. Thankfully I had managed to change some money in NY to tip him, and then I wandered my way through security for the third time to see a Dunkin Donuts next to my gate. I hadn't changed enough money and was not mean enough to us a credit card for buying a couple of donuts, so I searched quickly for wifi before boarding. I managed to pass out before we took off and slept though a good portion of the first leg down to Puerto Montt. After they partly deboarded the plane, and then reboarded the plane with one more person than seats we had available, I managed to sleep for most of the way down to Punta Arenas.

I arrived in Punta Arenas rather tired, but thankfully Charlie was able to sneak into the carousel area to help me with my bags, and then I ate three steak sandwiches before heading to bed.

On the 23d we packed up and started driving up to Torres del Paine and visited Puerto Natales along the way which had a cool port. Some people would call it little, but it's bigger and more organized than Boothbay but less protected despite being tucked deep into the fjords. 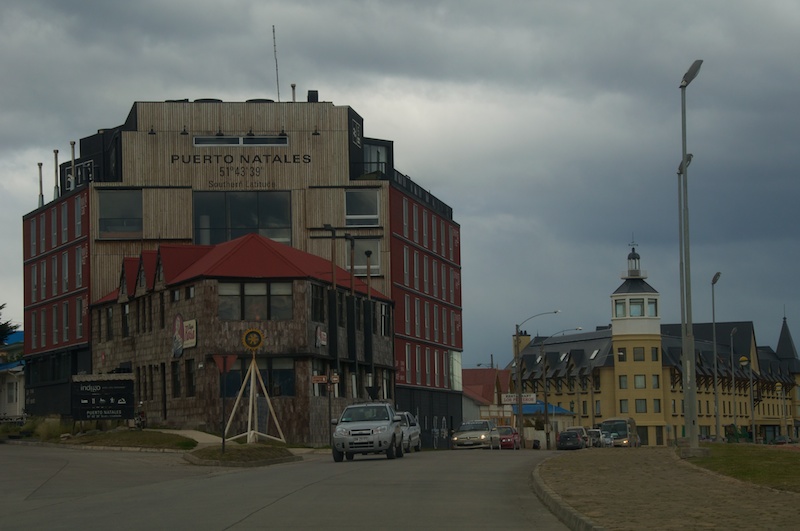 It is also home to the first findings of Megatherium also known as the giant sloth. 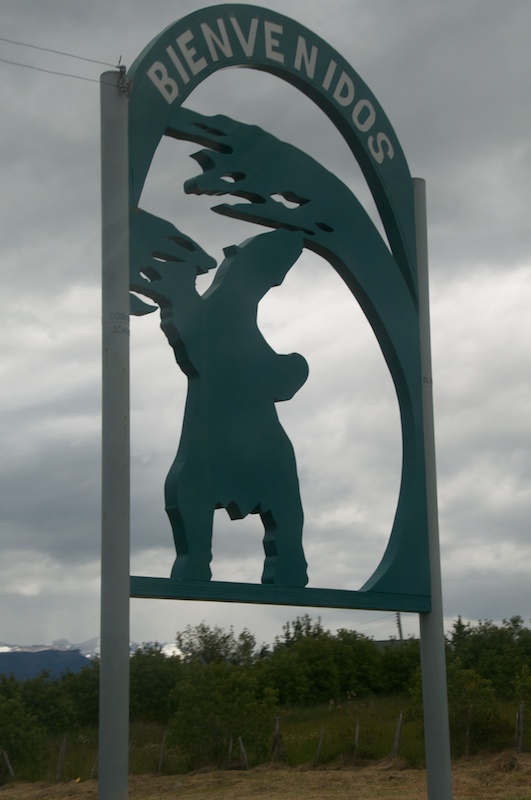 After heading north a bit further we got our first glance at the Torres del Paine in the distance.

And then we got our first glance at a few of the towers. 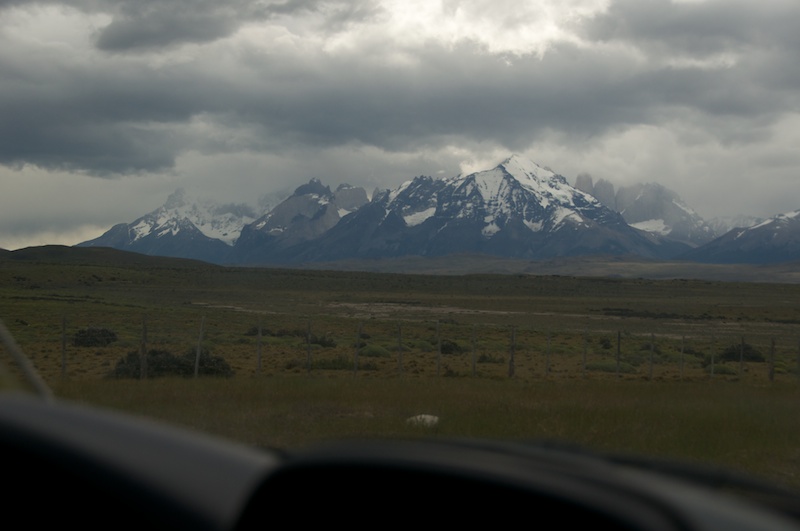 We found some wanaku hanging about the road. 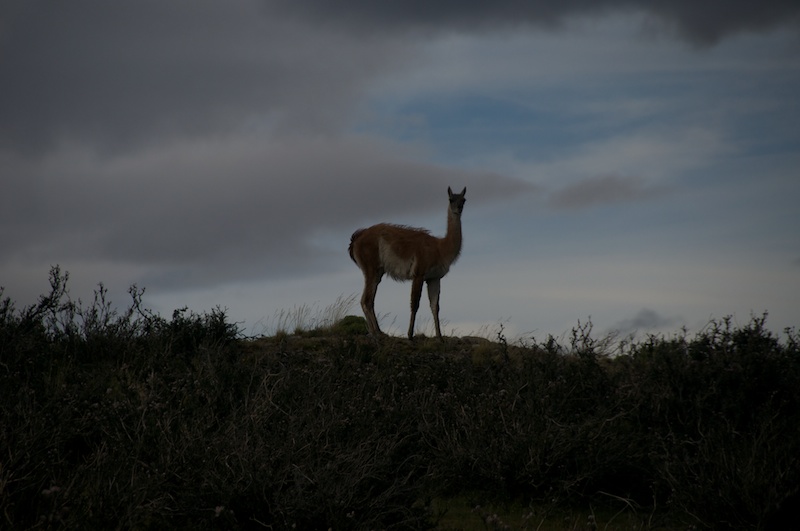 Had to stop a few times for photo opportunities.

Eventually we got our ferry ride into the trail organized and found a campsite with a rather nice view for the night. 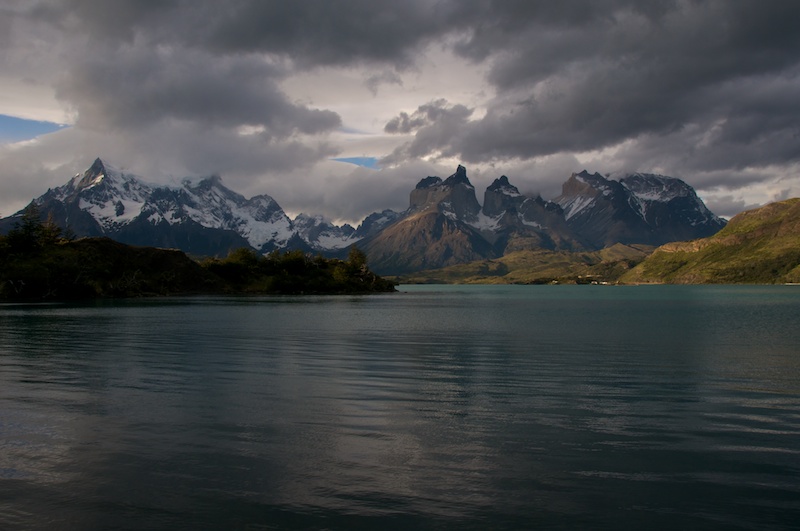 I'll finish this post with some of the other guests that we shared the campground with. The ferry ride is next. 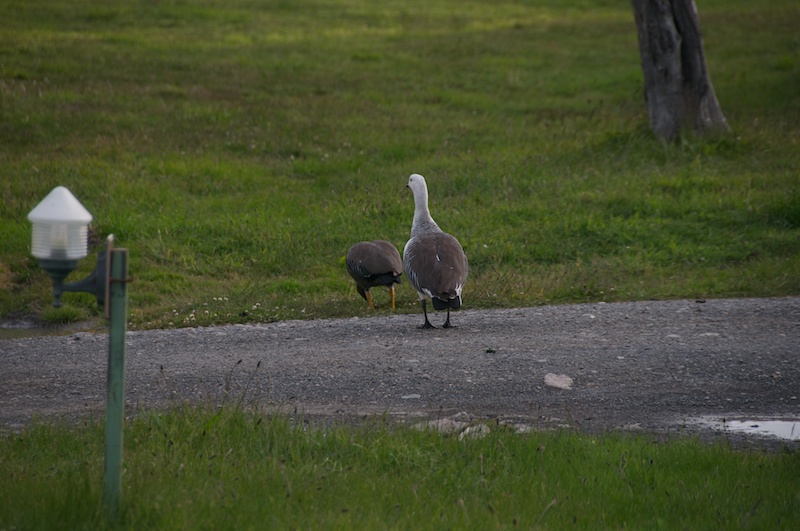